Most districts of the state registered a huge rainfall excess in September, which affected paddy, maize and cotton crops

Telangana farmers are in trouble after unseasonal rains destroyed much of their standing paddy, maize and cotton crops in September and October.

Rainfall has been erratic this year. It was unevenly distributed during the monsoon months. The monsoon itself withdrew on October 14, long after its annual withdrawal date. And there was excess rainfall during September. 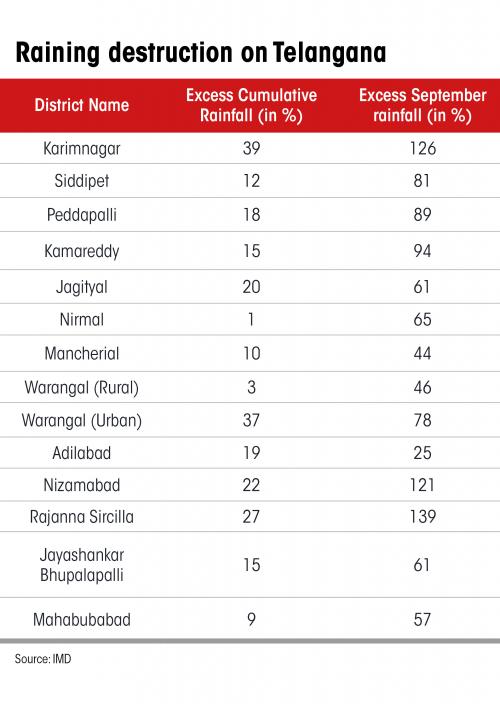 In a statement, the Telangana Rythu Sangham has sought compensation from the government.

“The situation of farmers who have lost paddy and maize which is ready for harvest is dismal. They are in dire straits. The crop losses are in 142 mandals of the state. The estimation of 1.2 lakh acres could be lower than the actual damage. Continuous evaluation should be done to ascertain the losses correctly,” the statement read.

The Sangham said while the Telangana government received Rs 3,184 crore in Central assistance and funds given under the 14th Finance Commission, it had spent only Rs 1,300 crore as input subsidy for drought. The rest, it said, had been diverted for other purposes

The Kisan Mitra helpline, established on the initiative of the Adilabad district collector, has so far received more than 3,500 calls. The helpline, which came into being in the backdrop of floods in the district last year, went viral on social media.

Farmers have been seeking help fervently. “The farmers are reporting more than 50 per cent crop loss and are clueless about what to do. We are trying to guide them on how to apply for insurance,” Shruti Naik, psychologist at Kisan Mitra, said.

Kisan Mitra is a project of the Hyderabad-based Centre for Sustainable Agriculture, which is involved in organic cultivation.

“We have received around 1,000 calls per day from across the state. Most farmers complain that the helplines of IFFCO Tokio and Agriculture Insurance Company of India Ltd are not reachable. Even if they connect, the executives cannot speak Telugu,” Naik added.

The distress was evident on speaking to a cross-section of farmers. D Yakaiah, a farmer from Munigalaveedu in Mahabubabad said less than a quarter of his paddy crop that had been ready for harvest, was standing.

“I did not insure my crop as I did not have money. The Rs 70,000 expenses on my child who was born underweight had only made things worse. It has been a vicious cycle of debt for the past five years. From a Rs 1.2 lakh loss sustained in 2016 due to rock-bottom chilly prices, my debts currently stand at Rs 3 lakh. I spent Rs 11,800 on the one acre paddy crop and was hoping to get Rs 43,000. But I would hardly get back input costs,” he said. 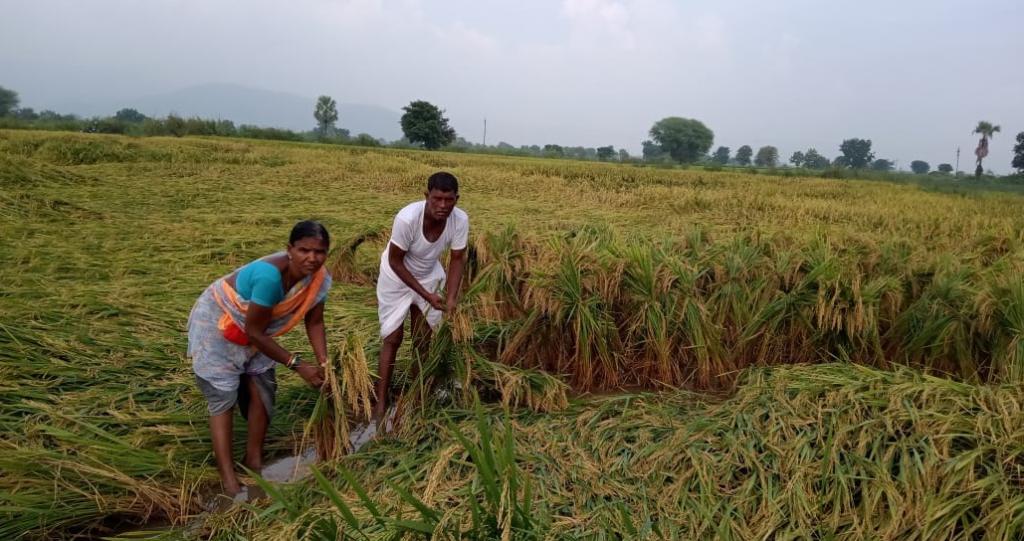 Yakaiah blamed his woes on climate, middlemen and lack of minimum support price (MSP) for the produce. The MSP rose by Rs 200 per quintal for paddy, while input costs of all commodities have increased. Owing to rains labour rates have shot up as the cotton farmers are desperately trying to salvage cotton seeds. This has increased my costs, he laments.

A cotton farmer, A Mahesh from Bheempur mandal in Adilabad district had grown his crop on ten acres. It could have fetched him Rs 5 lakh.

But Mahesh was not certain about his returns. “I have spent Rs 2 lakh on my 10 acre farm. Ideally, I should be get 150 quintals of cotton would get only 60 to 70 quintals now. If it rains on time, I might get another 30 quintals. The crop could not be insured as my land records had to be updated.”

The farmers complain the official machinery is not visible in making any assessment of the crop damage.