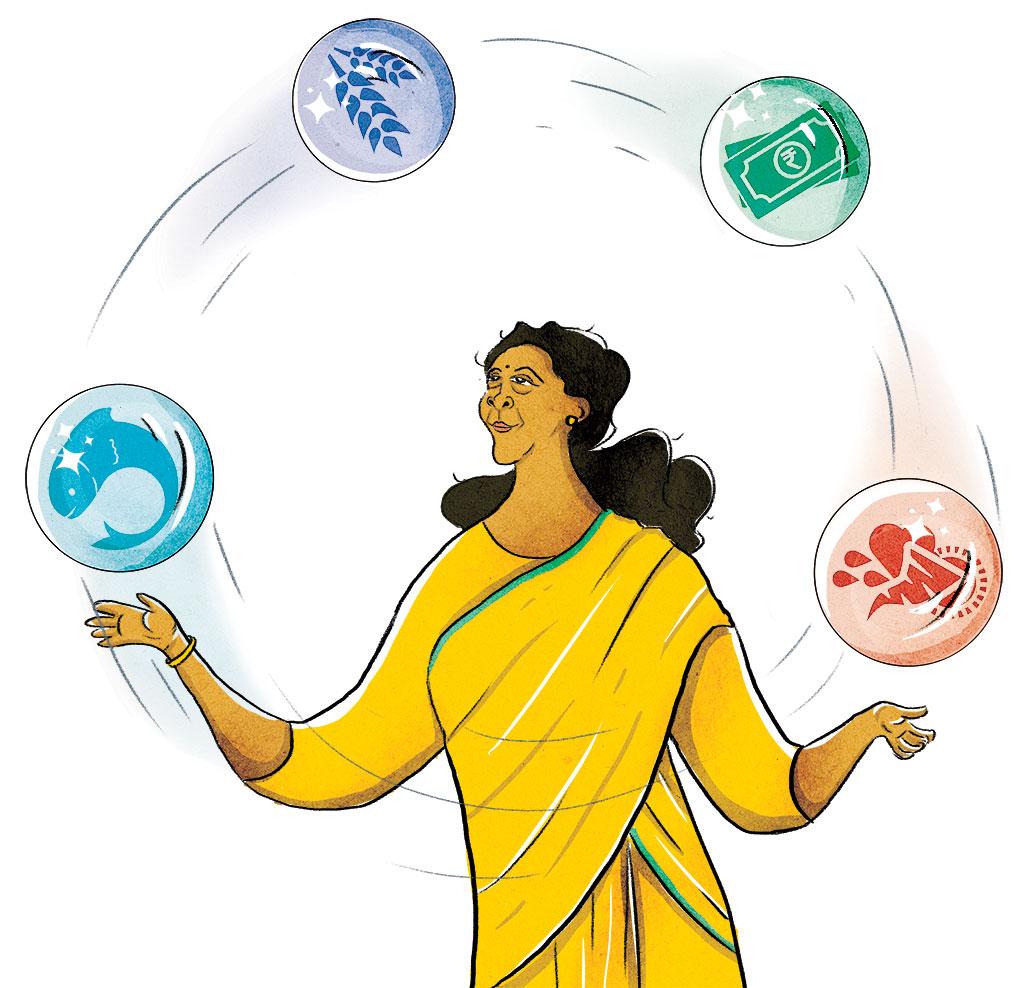 These are desperate times for India.

Rural unemployment was at a 45-year-high while consumption expenditure of rural families fell 9 per cent between 2011-12 and 2017-18, according to a report by the National Sample Survey Office (NSSO), which the government never released but got leaked to the media in November 2019.

One way to counter a flailing economy is to infuse cash. So, when Union Finance Minister Nirmala Sitharaman presented the Budget for financial year 2020-21, economists expected a substantial fiscal stimulus to key government initiatives, such as the Pradhan Mantri Kisan Samman Nidhi (PM-KISAN) — a direct cash transfer scheme under which farmers receive income support of Rs 6,000 a year — and the Mahatma Gandhi National Rural Employment Guarantee Scheme (MGNREGS).

At a media interaction in October 2019, Nobel laureate Abhijit Banerjee suggested an increase in allocation to MGNREGS to reboot the economy by boosting demand and increasing consumption in rural areas. But this did not happen.

Instead, the announcements are likely to aggravate rural distress, facilitate privatisation of the farm sector and trigger population movement from villages to cities because allocations to many crucial schemes have either gone down, remained static or risen marginally.

The government has massively reduced the food subsidy bill — from Rs 1.84 lakh crore to Rs 1.15 lakh crore. This is bound to impact the purchasing capacity of the Food Corporation of India (FCI), the nodal agency that procures wheat and rice to be supplied under the public distribution system, and indirectly impact farmers whose grains will not be bought. Moreover, FCI, whose share in the food subsidy bill last year was Rs 1.51 lakh crore, spent just Rs 75,000 crore.

This can mean two things — one, the allocation itself was inflated and the government never had the money; or two, it had the money but never intended to use it. Either scenarios did not help the rural distress last year. “Reduction of food subsidy bill in this Budget means FCI would procure less, which will adversely impact farmer income,” says Shambhu Ghatak, economist with Inclusive Media for Change Project, a Delhi-based non-profit advocacy group.

Similarly, the subsidy on fertilisers has been reduced by Rs 9,534 crore — Rs 83,434 crore to Rs 73,900 crore. This has been done ostensibly to discourage the use of chemical fertilisers and promote organic ones. But there is no corresponding rise in subsidy of organic fertilisers. “It’s plain ignorance if the government thinks organic farming does not require fertiliser,” says Devinder Sharma, a Chandigarh-based agriculture and trade policy analyst.

The government has allocated a paltry Rs 12.5 crore to promote the use of organic and biological sources of nutrients. “Study shows that stopping the use of chemical-based fertilisers to shift to zero-budget natural farming can reduce yield by 25 per cent to 50 per cent, which may put the country’s food security at risk,” says Ashok Gulati, Infosys chair professor at the Indian Council for Research on International Economic Relations (ICRIER), a Delhi-based think tank. “So the government needs to be cautious while moving towards zero budget or organic farming,” he adds.

The minimum support price regime has also taken a hit. The government has reduced allocations to Market Intervention Scheme and Price Support Scheme (MIS-PSS) and Pradhan Mantri Annadata Aay Sanrakshan Abhiyan (PM-AASHA). Under MIS-PSS, designated Union government agencies, such as the National Agricultural Cooperative Marketing Federation of India (NAFED), procure crops under price support schemes and work to provide adequate remuneration to farmers for their produce. The budget for PM-AASHA has been reduced to a third — from Rs 1,500 crore in 2019-20 to Rs 500 crore. What exactly is the government trying to do?

“It seems the government wants to aggravate rural distress, if not engineer new ones. It wants to reduce the number of people working in the farm sector and trigger a population migration towards cities. That is its idea of development and urbanisation,” says Sharma.

A report released by the National Skill Development Corporation in 2016 had recommended that the government should reduce the number of people involved in the farm sector from 50 per cent of India’s population to 38 per cent by 2022 to double farmers’ income. The government seems to be working to that end.

These Acts not just formalise and facilitate involvement of big companies in agriculture but tilt the playing field in their favour. For instance, the Model Agricultural Land Leasing Act, 2016, provides security to the landowner to lease out land to anyone. Agricultural laws in the country work on the presumption that the tiller is the owner of the land.

For this reason, big landowners in villages have traditionally feared signing contracts with farmers who work on their lands. Most such arrangements work on trust. This Act will not only make landowners secure about their right over the land, but also encourage companies to lease large tracts and undertake initiatives for captive farming.

The second, Model Agricultural Produce and Livestock Marketing (Promotion and Facilitation) Act, 2017, ends the monopoly of state-level Agricultural Produce Marketing Committees in organising and controlling agriculture markets or mandis. At such markets, buyers pay a mandi tax, and legally no trade can happen between farmers and buyers outside such markets as that will be a tax theft.

Traders have always demanded that they be allowed to buy produce anywhere as this would save them mandi tax and allow them to bargain. But farmers stand to lose from this.

The third, Model Agricultural Produce and Livestock Contract Farming and Services (Promotion and Facilitation) Act, 2018, formalises contract farming. It provides a legal framework to agricultural production (including livestock and poultry) based on a pre-harvest agreement between buyers (such as food processing units and exporters) and producers (farmers or farmer producer organisations).

If there is a natural calamity and the crop is destroyed, farmers would still be obligated to honour the contract and supply crops. If the market rate of the crop goes up, the farmer would still be contract-bound to sell it at the agreed rate. Again, they are unlikely to benefit from this Act.

In her budget speech, Sitharaman announced a 16-point action plan to counter rural distress. These also re-emphasised the government’s intention to facilitate private players at the cost of farmers.

The government plans to set up and run warehouses and cold storages on public-private partnership (PPP) model at the block level. So far, all such government facilities were solely owned by FCI and the Central Warehouising Corporation. There are many problems with the proposed PPP model. One, private owners will prefer using these facilities to store their own produce. Two, there might be forced land acquisition for setting up the facilities.

To improve connectivity for transporting produce, the government has proposed train (Krishi Rail) and flight (Krishi Udaan) facilities. These too will aid big companies more. “Small and marginal farmers, even large farmers, will not be able to use these facilities. Companies that deal in huge volumes will use them,” says Ramandeep Singh Mann, a farmer activist based in Delhi.

Fisheries is another sector in which the policies announced encourage non-fishers to enter the field. This is most evident from the minuscule Rs 19 crore granted for asset creation (such as cold storages) which could be used by traditional fishers.

“The government has not announced any scheme to help the traditional captive fish farming. This move to shift the traditional occupation away from fishers, and ‘liberalising’ farm markets is not in the interest of fishing communities, both inland and marine,” says T Peter, general secretary, National Fishworkers’ Forum, a trade union.

The Budget talks of steps to check water depletion in 100 water-stressed districts, but it does not seek to address this through environment friendly means such as water-efficient crops. It plans to expand Kisan Urja Suraksha Evam Utthaan Mahabhiyan scheme to aid 2 million farmers set up standalone solar pumps and help another 1.5 million farmers solarise their grid-connected pumps.

Under the scheme 30 per cent of the amount is given by the Centre, 30 per cent by the state and 40 per cent by the farmer, of which 30 per cent can be sourced through bank loan. “This will further increase extraction of groundwater,” says Ghatak. “Farmers would show interest in producing electricity only if the government gives them better and timely payment for the electricity they supply to the grid,” says Siraj Hussain, former Union agriculture secretary.

Even the allocation for rainfed area development and climate change has been reduced from Rs 250 crore to Rs 202 crore. Under this, farmers get financial and other kinds of support, such as cheaper seeds, to practice integrated farming system like inter-cropping and rotational cropping. These methods enhance farm returns and mitigate the impacts of drought, flood and other extreme weather events.

With climate change, extreme weather events will only rise. Though the government has increased the allocation to the Pradhan Mantri Fasal Bima Yojana — a scheme launched in 2016 to secure farmers against natural calamities and crop loss — from Rs 14,000 crore in 2019-20 to Rs 15,695 crore for 2020-21, it remains to be seen whether the rise will be enough.

In 2018-19, the government accepted claims worth Rs 19,000 crore, shows agriculture ministry data, and in the kharif season of 2019-20, the government has received Rs 18,000 crore of insurance claims, as per media reports.

The Centre has also decreased the funds for adaptation and climate action. The National Adaptation Fund gets Rs 80 crore while the figure in 2019-20 was Rs 100 crore.

“Expenditure on agriculture, livelihood and rural development should have been oriented towards mitigating risks, which include climate change. But this has not happened,” says Kapil Subramanian, climate policy expert at Delhi-based non-profit Centre for Science and Environment.

Budget 2020 seems to have all the ingredients that will force farmers to quit agriculture in droves. Is this how the government plans to counter rural distress and double farmers’ income by 2022?

With inputs from Akshit Sangomla and Rajit Sengupta