Were warning signs about bird flu in Kerala overlooked

Farmers claim to have reported illness and death of ducks in Alappuzha district to the administration; but precious time was lost confirming the cause 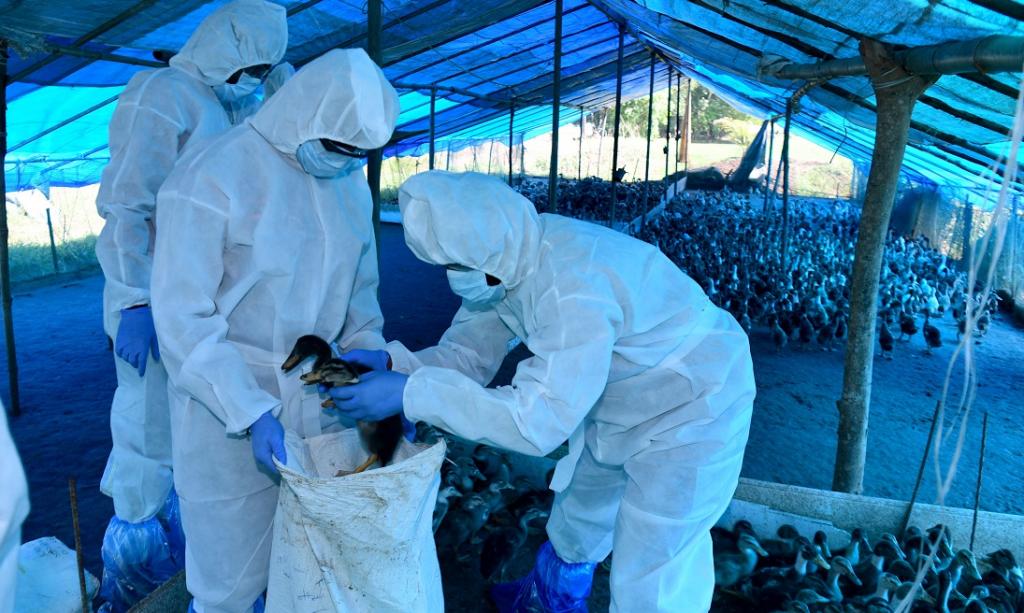 Culling in progress at Pallippad village in Kuttanad on January 4. Photo: Information and public relations department, Government of Kerala

Livestock owners did report warning signs about the bird flu epidemic that started in central Kerala around New Year’s Eve but the lack of a testing facility in the state meant that precious time may have lost in confirmation of the malaise, according to farmers.

Farms in the region had started witnessing symptoms of the H5N8 strain of the disease from December 19, 2020 according to V J Sebastian, a duck farmer from the village of Karuvatta in Alappuzha district, the epicentre of the outbreak. By December 21, deaths had been reported from farms.

Sebastian said ducks were seen falling unconscious and dying after a few hours.

“The farmers had apprised the administration as soon as the birds started to show symptoms of the disease. However, it took around two weeks to confirm avian influenza. The state urgently requires its facilities to test and confirm bird flu incidents,” B Rajasekharan, Alappuzha district president of Kerala Duck Farmers’ Association told this reporter.

That is true. All tests and confirmations were from the National Institute of High-Security Animal Diseases (NIHSAD) at Bhopal.

Kerala lacks any facility to identify the disease on time. It has no well-equipped laboratory to ascertain the reasons quickly. Reports get delayed for many days since other states are also dependent on NIHSAD.

PK Santhosh Kumar, joint director of the Kerala Animal Husbandry Department in charge of Alappuzha, said the department had no clue as to which migratory bird had spread the disease this time. No dead migratory bird had been seen in the affected localities so far, he said.

The department had started efforts to gather more information on virus-carrying migratory birds with the forest department’s help, Kumar added.

Kumar said no vaccine effective in countering variations of the avian influenza was available. “The farmers are rearing ducks scientifically here according to our guidelines. Other than culling and disinfecting the farms, we have no other way to fight the disease,” he said.

According to Kumar, the duck farms of Kuttanad had reported numerous cases of fowl cholera caused by Pasteurella multocida and infection of Riemerella anatipestifer, an antibiotic-resistant bacteria.

“The immunity level of ducks in the region has decreased due to the fowl cholera and Riemerella. So it would be easy for the avian flu virus to attack the ducks. We are searching for expert help to improve immunity levels of ducks in Kuttanad,” he said.

The influenza outbreak was confined to the villages of Pallippad, Nedumudy, Thakazhy and Karuvatta, forming part of Kuttanad, the palm-fringed emerald islets of Alappuzha district that are surrounded by vast expanses of backwaters.

Waterlogged Kuttanad is spread over approximately 110,000 hectares. Of this, 50,000 hectares are 60-220 centimetres below sea level. For tourists, it is the hub of Kerala’s backwater tourism experience. For farmers, it is one of the areas where farming is conducted below sea level.

Over 1.8 million people live in Kuttanad and most of them have been rearing ducks for generations. The low-lying paddy fields and backwater expanses of Kuttanad are conducive for rearing ducks.

By the evening of December 31, 2020, 69-year-old K Samuel from Pallippad village had lost 5,264 ducks to the flu outbreak. On New Year’s Day, the administration culled the remaining 2,806 ducks on his farm as a preventive measure.

A farmer who is also engaged in paddy cultivation and aquaculture, Samuel estimates his losses at Rs 10 lakh. However, the district administration informed him January 11 that he would get compensation worth around Rs 4 lakh.

“This is very meagre. The government claims the state has already brought influenza under control and farmers can resume farm activities by buying fresh hatchlings from outside,” Samuel told this reporter.

“But how can I rebuild my lost livelihood using the meagre compensation they have offered? In the last few years, the feed price and labour costs have increased manifold. I am now weighing my options about whether to resume or abandon duck farming forever,” he added.

Samuel’s family is among over 1,200 duck farming families in Kuttanad, who have been affected.

As many as 28,000 ducks perished in Kuttanad in the last two weeks solely due to the outbreak, according to the Kerala Animal Husbandry Department’s Alappuzha district office,

The department has culled 34,602 ducks to check the spread of the disease to other parts. Governmental agencies have also destroyed 32,550 eggs and 5,070 kg of feed.

A strict ban on selling eggs and meat of ducks and chicken is still in force in Kuttanad.

“We are sad that the compensation announced this time by the state government is the same as what was fixed in 2014 when the flu was reported for the first time in the district. Seven years have passed and the cost of production has increased significantly. The government is duty-bound to increase the compensation,” he said.

The amount should be enhanced to Rs 250 for a duck older than two months and Rs 150 for the smaller one. There also must be a considerable subsidy for duck feed.

Though the authorities say the crisis is over, nobody is purchasing ducks and eggs from farms in the district not affected by the epidemic. They too have landed in trouble.

Alappuzha in general and Kuttanad, in particular, have witnessed bird flu outbreaks in 2014 and 2016. The floods of 2018 and 2019 and recurring bacterial infections have already made everyday life miserable here, along with the novel coronavirus disease pandemic.

“The bird flu outbreak is the latest entrant. Virus outbreaks, bacterial infections and floods had already made the survival of this sector extremely difficult. Several duck farmers of the region have already shifted to other jobs because of the unexpected turns of events,” said Rajasekharan.