Why India is vulnerable to attacks by alien species

The country has faced at least 10 major invasive pest and weed attacks in the past 15 years, with most recent being the fall armyworm that destroyed almost the entire maize crop in 2018

Theirs is possibly the most unnoticeable of all invasions. When pests, weeds, viruses and bacteria invade, they can wipe out food crops, alter the ecology, deplete water levels and cause diseases. In the past 15 years, India has faced at least 10 major invasive pest and weed attacks.

The most recent was the fall armyworm that destroyed almost the entire maize crop in the country in 2018. India had to import maize in 2019 due to the damage caused by the pest in 2018.

Invasive pests and weeds can enter a country by flying over the border or by simply growing gratuitously. In such cases, checking their entry is difficult. But when they land up at airports and dockyards in cargos of imported grain or with items carried by tourists, the authorities should be able to weed them out.

For this reason countries have animal, plant and health quarantine facilities at all transborder entry points. India, however, seems to have let its guard down of late, especially with regards to agricultural products, which form the bulk of its imports.

It is difficult to establish how pests and weeds are entering India. What’s inexplicable is that there is no institutional mechanism to even probe these invasions. The Union Ministry of Agriculture and Farmers Welfare (MAFW), which is responsible for the control of invasive pests and weeds, has not investigated any invasions till date, says a senior scientist at the Directorate of Plant Protection and Quarantine Storage (DPPQS), Faridabad, Haryana, on condition of anonymity.

Emails and phone calls by Down To Earth (DTE) to MAFW Advisor Rajesh Malik, joint secretary (plant protection) Aatish Chandra and agriculture commissioner S K Malhotra remained unanswered. “There should be a war room-like cell to catalogue, monitor and investigate the influx of exotic pests and weeds,” says Bhagirath Choudhary, director of South Asia Biotechnology Centre, a non-profit based in Delhi. “In fact, India’s quarantine system needs an overhaul,” he adds.

Import of agricultural products is governed by the Destructive Insects and Pests Act, 1914. The country has 108 plant quarantine centres located at major airports, seaports and transborder railway stations. The check posts at these quarantine centres are under the control of the Central Board of Indirect Taxes and Customs (CBITC), which works in close coordination with DPPQS.

When an agricultural product arrives, customs officials check if it has a phytosanitary certificate or not. This certificate, showing that the product is without any pest or weed infestation, is issued by the government of the exporting country. If the product is certified, it is cleared by DPPQS after a sample test.

MAFW has also prepared lists of plants whose import is allowed, restricted or banned. There is also a list of weeds that should not enter the country with any import. All agricultural imports have to be as per these five lists. But these regulations are often flouted by officials.

Moreover, only 57, or only half of India’s plant quarantine centres, are functional. Rest are shut as the import-export is negligible or because of staff shortage. “Customs officials also often release the cargo without referring it to DPPQS. We can’t do much there, says a senior official at MAFW,” requesting anonymity. “We formally filed a complaint against this illegality to India’s four zonal customs commissioners on September 24, 2018,” says the official. DTE has seen the complaint letter. 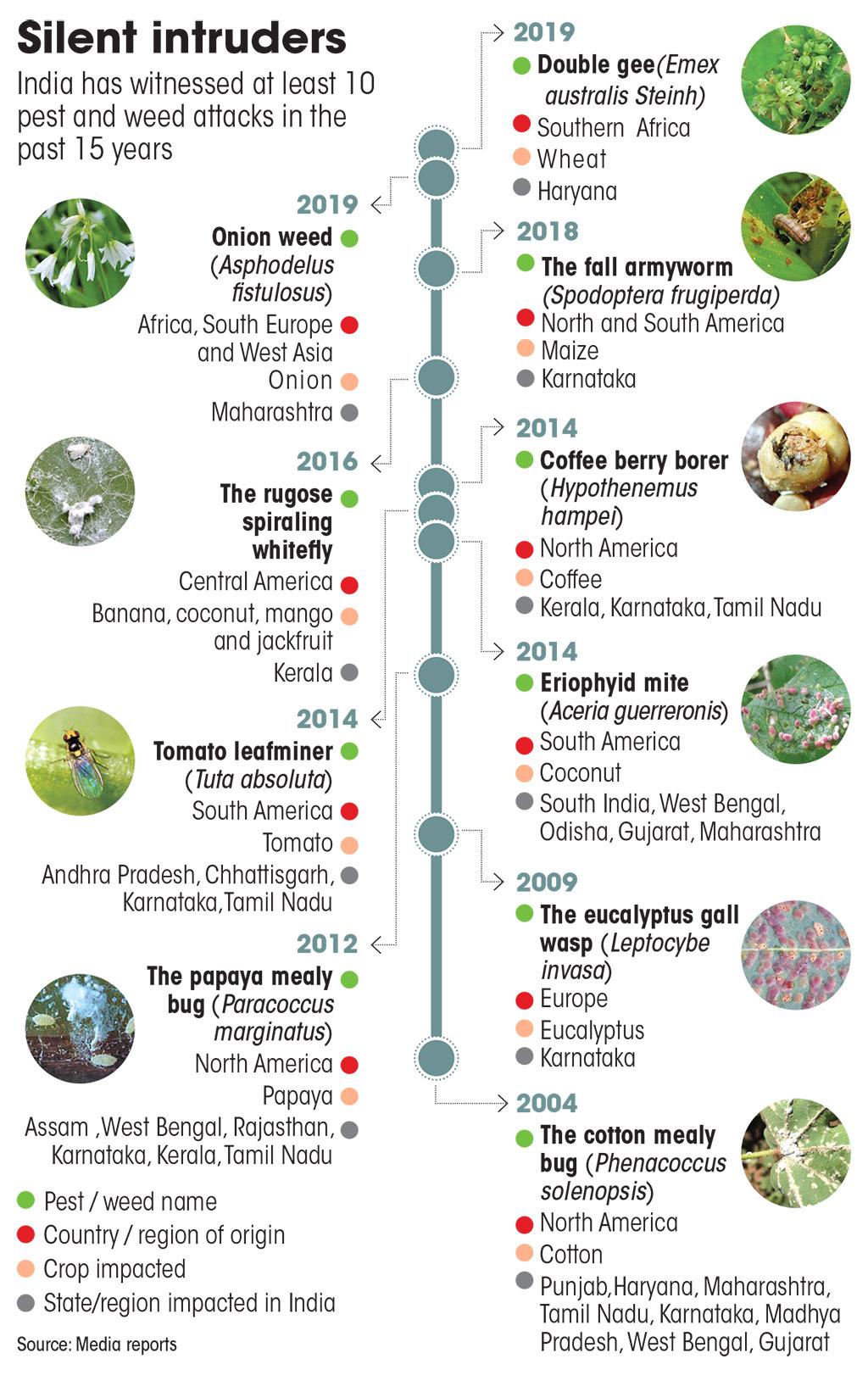 However, DPPQS itself is not free of blame. Corruption is so pervasive here that the directorate itself ordered an investigation in 2007 against its officials for accepting bribes and the Central Bureau of Investigation (CBI) registered a case. The case came to limelight in 2007 after the US Department of Justice released a report stating that DOW AgroSciences, a US company, gave $0.2 million in bribes to India’s quarantine officials between 1996 and 2001 to get its products cleared at different ports in the country.

More recently, in 2017, DPPQS transferred the entire staff of the Chennai regional plant quarantine station after CBI seized unaccounted money from officials on the charge of clearing consignments based on fake phytosanitary certificates. There have been many other such cases.

“We don’t have a mechanism to find out if officials are acting dishonestly. When someone’s consignment is cleared illegally, the competitors complain to us and after that we investigate,” admits a senior official at DPPQS.

“Quarantine jobs at ports are the most lucrative in the agriculture ministry,” says a scientist at DPPQS, requesting anonymity. “If a consignment is stuck at a port for lack of certification, the company has to pay for it. Therefore, they are willing to pay bribes,” says a scientist at the Mumbai port. Even foreign governments pull strings to get products cleared.

In 2007, for instance, the US wanted India to ignore its phytosanitary norms for weeds and clear a wheat consignment. The government, however, did not yield.

“The security at India’s animal quarantine stations is also virtually non-existent and items disappear in transit. Take the case of barramundi (Asian sea bass) fish,” says Nilkanth Mishra, founder of Centre for Aquatic Livelihood, a non-profit based in Pune.

He explains, “Farmers and pisciculturists in India import barramundi seeds, breed the fish and export them. But the number of seeds often reduces after they are sent for quarantine checks. DPPQS officials declare that the seeds were found to be dead, but actually the seeds are stolen and illegally sold and cultivated.”

A major problem with the quarantine system is the shortage of staff. In the 1990s the government had set the total number of sanctioned posts for DPPQS scientists at 1,928. This number has not increased since then. “What’s worse, about 60 per cent of the posts are vacant,” says O P Verma, deputy director at DPPQS.

With increasing global trade and movement, countries worldwide are becoming serious about alien pests and microbes. Nepal, for instance, stopped the entry of agriculture products from India without a phytosanitary certificate on June 17 after the outbreak of acute encephalitis syndrome in Bihar earlier this year.

There is no reason for India to be casual about its quarantine regulations, especially because its agricultural imports have seen a threefold rise in less than a decade — from R510 billion in 2010-11 to R1.6 trillion in 2016-17, as per MAFW’s 2017 annual report.

“At a time when bioterrorism is a global reality, it is imperative that we get our quarantine system in order,” says C D Mayee, former president of Delhi-based Indian Phytopathological Society that promotes research on plant diseases.