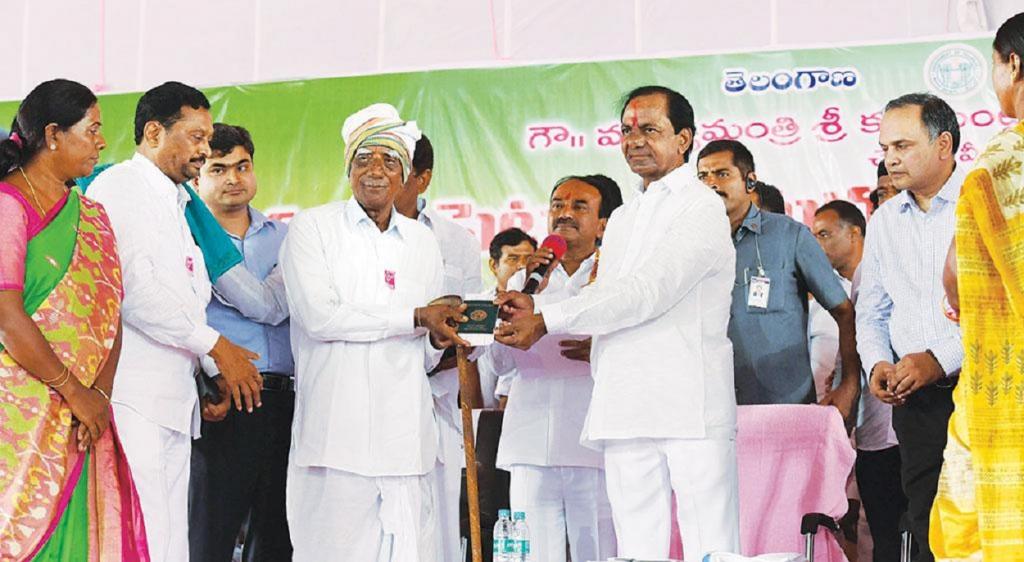 India's newest state Telangana is witnessing an agrarian experiment of sorts. It is the first state where the government is providing land-owning farmers monetary assistance even before they plant the first seed. The scheme has even attracted the attention of the prime minister as a way to achieve the target of doubling farm income by 2022.

The reason behind the initiative, named Rythu Bandhu Pathakam or Farmers Investment Support Scheme, is the extreme agrarian distress that the region has witnessed in the past two decades. Take the case of Pottipalli village in Sangareddy district. Well into the second month of the monsoon, the farmers are still waiting for a good spell of rain. The cotton-growing village has already undertaken sowing twice this year because the first attempt failed due to lack of rains. “Last year, untimely rain and pest attacks ensured that the village suffered a 100 per cent loss. A lot of hope is on this season but we have already sown twice,” says 40-year-old Mallana Dakuri, who farms on about five hectares (ha), a little over 1 ha of which he has rented. The village has witnessed one suicide this year and there is an overwhelming feeling of helplessness all around.

On May 10, the chief minister launched Ryuthu Bandhu to cover input costs of seeds, labour and fertilisers (see ‘Troubled course’ on p18). Under the scheme, farmers get Rs 4,000 per acre (1 acre equals 0.4 hectare) for up to 50 acres. The expenditure during the kharif season is estimated to be around Rs 5,700 crore. A grand sum of Rs 12,000 crore has been set aside for this in the state budget for the current fiscal, making it the most expensive farmer welfare scheme by a state in the country, says a June 2018 State Bank of India report. If the scheme is expanded across the country, it would cost the exchequer around Rs 3 lakh crore, says the report.

Rythu Bandhu is being implemented on a war footing in Telangana. Between September 2017 and March 2018, paper-based land records of the state’s farmers were updated and digitised. The government started distributing cheques and patta passbooks required for the collection of the cheques in May and by mid-June, over 5 million land-owning farmers, which is about 90 per cent of the total eligible farmers in the state, had been identified and handed over cheques. “This is truly a historic step. For the first time there is no application process. All the beneficiaries have been identified and provided with the cheques. The only cheques left undisbursed are those stuck in land record disputes. These are barely 2-3 per cent of the total land-owning farmers in the state,” says C Parthasarathi, principal secretary in the state’s agriculture department. 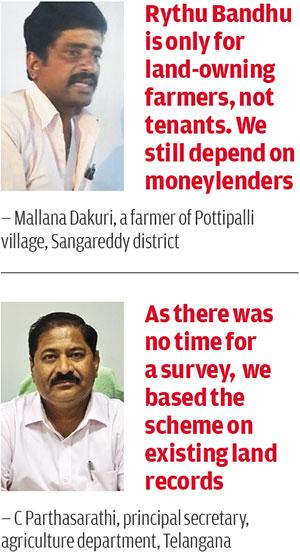 Though the speed of implementation of the scheme is commendable, it has a glaring problem—non-inclusion of tenant farmers. Since the scheme uses land-ownership, rather than records of cultivators, for identification, a large number of farmers have been left out. “Our village was resettled 30 years ago and not many of us have a patta or registration. More than half the village leases land at Rs 15,000-20,000 per acre per year and practices tenant farming on the basis of informal agreements. As a result, many are not eligible for the government support,” says Shivudu Pullakanti, a farmer of Pottipalli, who owns 1.2 ha and has taken another 0.8 ha on lease to farm. “Since most of us cannot avail loans due to lack of documents, there is a high dependence on moneylenders who charge an interest up to 3 per cent per month. Even those who got some support spent it on the first sowing attempt this year,” he adds.

The All India Kisan Sangharsh Coordination Committee, an umbrella organisation of farmer unions and non-profits, has organised several protests against the exclusion of tenant farmers. “The government, however, thinks that tenant farming is negligible in the state. But this claim of the government is turning out to be a gross underestimation,” says Kiran Kumar Vissa of Hyderabad-based non-profit Rythu Swarajya Vedika (RSV). A survey in May-June 2018 by RSV, along with students from the Tata Institute of Social Sciences, Hyderabad, and Azim Premji University, Bengaluru, in three villages—Pottipalli, Itikyala in Mancherial district and Gimma in Adilabad district—found that in Pottipalli and Itikyala 40 per cent of the land was under tenancy. “The extent of tenancy is surprising even to us. It was thought that tenancy in the state is very low but this has clearly changed,” says Vissa, who is also one of the authors of the study. “The last 50 years have seen tremendous changes in the agrarian landscape of Telangana. Land ownership and land use have changed drastically. The Rythu Bandhu scheme does not take cognisance of these changes,” says M Kodandaram, a former professor at Osmania University in Hyderabad.

In the four villages visited by Down To Earth, tenancy was quite common. In Jangaon district’s Venkatadripet village, around half of the farmers are engaged in tenant farming, says Srinivas Reddy, who farms on 3.6 ha, more than 50 per cent of which he has taken on rent. In the neighbouring village of Malkapur, where the average landholding per household is about 2 ha, a majority of the farmers practice tenant farming, says village sarpanch Kongar Ravi. “Most people here own a little land and lease too. So the scheme is helpful to some extent. But a lot of money that has been distributed has ended up with those who do not farm and only own land,” he adds. What’s worse, the money spent will remain the same in rabi, though cultivation during the season is 70 per cent less than that in kharif, as per Telangana agriculture department.

On June 29, while hearing a public interest petition filed by Durgam Prasanth, a tenant farmer of Jayshankar Bhupalapally district’s Ankushapur village, on non-inclusion of tenant farmers in government schemes, the Hyderabad high court issued notices to the state’s top agriculture and revenue officials asking for a reply in three weeks. The court has also taken up a letter seeking the exclusion of wealthy persons from Rythu Bandhu as a public interest petition. “This is not an anti-poverty scheme, it is to assist farmers. The government cannot afford to become party to agreements between land owners and tenants. There is no chance that the current design of the scheme will be changed for the next season,” says Parthasarathi.

The reason the government has not been able to include tenant farmers in the scheme is that it simply has no idea of area under tenancy or the number of tenant farmers. “The revenue department needs to maintain a registry of cultivators and owners every year. But these records are poorly maintained. In over 90 per cent of cases, the column relating to cultivator is left blank. These records could have been used to estimate the number of tenant farmers and the acreage under tenancy,” says Vissa. The alternative, he says, is to undertake a complete survey of the landholdings. 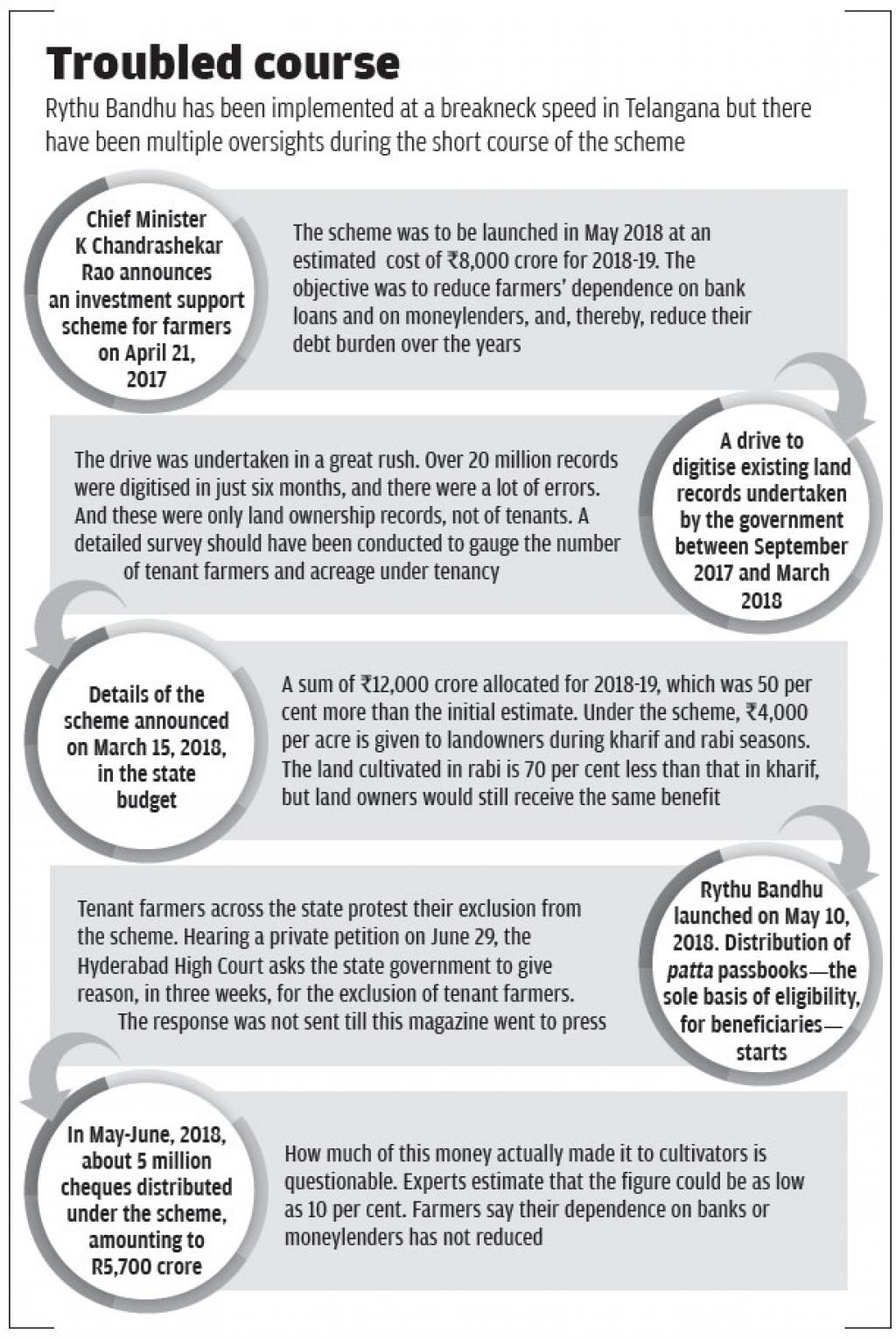 Such a survey was supposed to be done under the National Land Management Programme of 2014 and the Centre has already released Rs 85 crore of the Rs 165 crore allotted for the survey to Telangana. The state’s agriculture department undertook a preliminary survey last year, covering about 70-80 per cent of the state, but the exercise was scuttled by the ownership disputes that emerged. These include mismatch of land and owners, multiple owners for the same piece of land and discrepancies in plot sizes. “A detailed survey could take years. For the scheme we had a tight deadline and could not afford to link the two. It was decided that an updated and digitised land record shall be used for the scheme instead of undertaking a survey,” says Parthasarathi, and adds that the government has not abandoned plans of a survey but it is no longer a priority.

However, there are major problems with the updation and digitisation drive the government undertook. “Many farmers have not been able to avail the benefits of the scheme since their old records do not match the updated records,” says M Raju of Peesara village in Warangal Urban district. Raju, for instance, owns 3.2 ha farmland, which is embroiled now in a dispute due to double registration of a patch of land that includes his. “Such problems are common because 20 million records were digitised in just six months to complete the process before the launch of Rythu Bandhu. There are bound to be errors,” says Vissa.

Before the formation of Telangana, the Andhra Pradesh government was issuing Loan Eligibility Cards (LECs) since 2011 to enable tenant farmers claim loans from banks and to reduce dependence on moneylenders. But the scheme was not successful. The current government is not enthusiastic about issuing LECs. In 2014, it did not issue a single card.

In the past two years, it has issued just 0.1 million cards. LECs could also have been used to cover tenant farmers under Rythu Bandhu.

Rythu Bandhu has even proved ineffective in meeting farmers’ input costs because the assistance of Rs 4,000 per acre (Rs 10,000 per ha) is insufficient for crops cultivated in Telangana. For paddy, maize, cotton and chillies, the four most common crops of the region, the average input costs are around Rs 62,000, Rs 50,000, Rs 1,00,000 and Rs 1,70,000 per hectare respectively. “The investment support is so meagre that farmers still depend on loans from banks and moneylenders,” says Kondal Reddy of RSV. This is corroborated by the banks too. “Compared to last year, we have issued more loans this year,” says M Ramesh, branch manager at Indian Bank in Jangaon district’s Malkapur village. This is the nodal bank for the scheme in the area. In Pottipalli, residents say that both tenancy and borrowing from moneylenders have increased this year. “This is because we have more area under cultivation to make up for the losses incurred in previous years,” says Srinivas Golla, a farmer of Pottipalli.

There has been a lukewarm response to Rythu Bandhu from farmers too. “Improving remuneration through government procurement and mechanisms such as the minimum support price would have ensured assistance to the real cultivator,” says Kodandaram. “Another way is to provide the inputs in kind, rather than cash,” says Manjeera.

While the impact of the investment support scheme will only be clear after the kharif season, the Union government and states like Maharashtra and Karnataka have already shown interest to launch similar initiatives. The signs from Telangana, however, are not promising as of now.

(This story was first filed in the 1-5th August issue of Down To Earth under the headline 'First, fast, but... ').