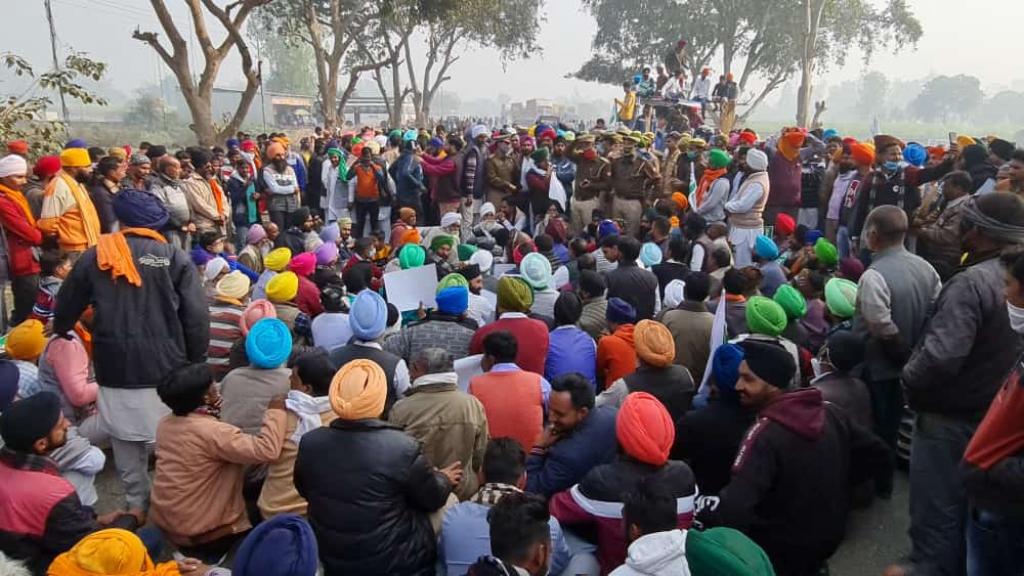 Farmer leaders December 9, 2020 rejected the draft amendments presented by the Union government and reiterated the demand of a complete repeal of the three farm laws and the proposed Electricity (Amendment) Bill, 2020 along with a written assurance of minimum support price.

The farmer unions said they would escalate the protest. They called for a major countrywide protest on December 14 and blocking of Delhi-Jaipur Highway and Yamuna Expressway by December 12.

Speaking during a press conference, farmer leaders representing the Sanyukt Kisan Morcha said a call has been made to boycott all Jio / Reliance products and services, including petrol pumps by the Ambani and Adani groups.

The Union government December 9 afternoon sent a draft containing eight amendments. The draft was sent to the farmer leaders after the December 8 meeting between them and Union home minister Amit Shah failed to break the deadlock.

The sixth round of talks since the protests, scheduled for December 9 with Union agriculture minister Narendra Singh Tomar, was eventually called off.

“We had a two-hour discussion with the home minister Tuesday. We told him that we have already had five rounds of talks before. We told if he had discussed the laws before introducing them, this situation would not have arisen. He said that the mistake could be solved together. We again demanded a complete repeal of the laws,” said Shiv Kumar Kakka from Rashtriya Kisan Mazdoor Mahasangh, Madhya Pradesh.

The farmer unions said the proposal by the Union government doesn’t contain anything new.

“We will intensify the agitation now. A call will be given to farmers in states near Delhi such as Rajasthan, Uttar Pradesh, Uttarakhand, Punjab and Haryana for ‘Delhi Chalo’. In other states, dharnas will continue indefinitely,” said Darshan Pal Singh from Krantikari Kisan Union.

Bharatiya Janata Party politicians and their offices would be gheraoed on December 14 as part of the protest, he added.

It also called upon farmer organisations to organise continuous sit-ins in all districts and state capitals as well as district-level dharnas.

What does the draft say

The first proposed amendment in the draft related to the farmers’ apprehensions that the new laws would weaken the established mandi system. Farmer leaders and agricultural experts have many a time argued that since the new laws made the trade outside mandis tax / cess free, this would divert the trade from mandis to outside and lead to exploitation of farmers.

To this effect, the draft said the states could be authorised to register all private mandis and even levy cess or fee like in the case of Agriculture Produce Marketing Committee mandis.

One of the most pressing concerns of the farmers’ agitation has been the dismantling of MSP regime fearing private trade would increase. To this effect, the government has agreed to give a written assurance to farmers that the existing MSP system will continue.

Other major apprehension of farmer unions was license-free trade outside government mandis through the new laws, which will enable any person with just a PAN card to purchase directly from farmers. On this, the government said that it is open to giving state governments the power to register such traders and regulate the private trade keeping in mind local situations.

The draft also said till the state governments don’t come up with their own rules regarding registration of the contract between a farmer and a private trader, the farmers can approach the sub-divisional magistrate office for notifying it within 30 days of signing the contract.

On fears that big corporates will take over the lands of the farmers, the government said the laws already make it clear that this would not be allowed, but they would specify again that no buyer or sponsor could take loans against farmland.

Similarly, they won’t be allowed to attach any farm land under contract farming; nor any such condition will be made to farmers.

On farmers’ demand to scrap the Air Quality Management of NCR Ordinance 2020, under which there is a provision of penalty for stubble burning, the government said it is ready to find an appropriate solution.

On demands to scrap the proposed Electricity Amendment bill 2020, the government said there would not be any change in the existing system of electricity bill payment for farmers.