Milkmen earlier sold milk products, including cheese, curd. They are now unable to arrange fodder for their cows

Cattle seen at the seaside village of Satabhaya. Large tracts of land lost fertility due to increase in salinity Photo: Ashis Senapati

Milk production in Odisha’s coastal pockets has taken a hit as the ingress of saline water has increased, resulting in less green grass for high-breed cows that farmers have reared in the area for decades.

Seawater ingress in agricultural fields, grazing grounds and ponds in the seaside villages of Kendrapara and Jagatsinghpur districts has led to large tracks of land losing fertility.

The fate of several milkmen hangs in the balance due to the marching of the sea and the ingress of salinity in coastal pockets, even as World Milk Day — established by the Food and Agriculture Organisation of the United Nations — is observed across the world on June 1 to recognise the importance of milk and the dairy sector.

Cattle do not receive sufficient fodder, said Dibyalochan Rout, a former Gram Panchayat member of Satabhaya village, one of the most-affected by sea erosion in Kendrapara.

Cows and buffaloes in several seaside villages have less fodder to eat due to reducing grazing grounds, said Balaram Sahoo, an animal scientists and research officer of the Odisha Biological Product Institute in capital Bhubaneswar.

“Many high-breed cattle in coastal pockets suffer due to increase in salinity level because of climate change and sea erosion,” Sahoo said. Several villagers — to increase milk production — began rearing high-breed cows since the 1990s, Sahoo pointed out. “High-breed cows are not adopted to the local climate. As a result, people are now suffering huge losses,” he added.

High-breed cows like the Sankar variety are produced in rural areas through artificial insemination.

“We are now trying to convince seaside villagers to rear only local variety cows as cross-bred cows lack immunity from salinity and other climate change factors in seaside areas,” said Sahoo.

Several seaside areas are not protected from the high tide by saline embankments either, leading to rapid deterioration in the quality of water. This has resulted in many villagers abandoning agricultural lands next to the coastal strip. 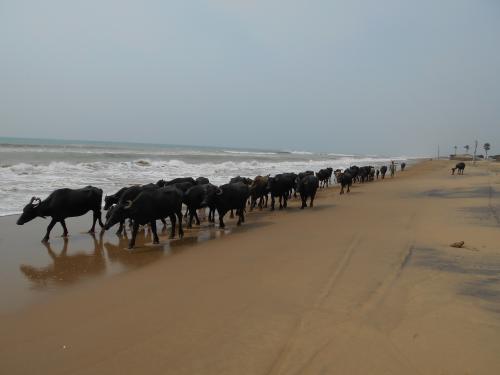 “Within two decades, our village lost nearly 15 acres of grazing ground for cattle due to ingress of salinity,” said Rasmita Sahani, the sarpanch (village head) of the Satabhaya Gram Panchayat. “Salinity in the land has risen too much,” she added.

Villagers would get a sufficient amount of milk just 10 years ago from 400 cows, with the number decreasing to 150 cows, according to Sahani.

“Salinity is now above the permissible level for grass production,” she said.

Locals earned their livelihood selling milk products — including cheese and curd — years ago, said Narendra Nayak, a farmer from Siali village in Jagatsinghpur. Family members of milkmen now, however, are worried as they are unable to provide fodder, added Nayak.

“I used to earn around Rs 6,000 per month by selling milk from our three cows 10 years back. But now my cows don’t get green grass,” said Banamali Behera, a milkman from Barahapur village.

The unchecked growth of prawn farms also rendered large areas of fertile farm lands useless in several coastal villages: Untreated effluents are released from these farms to agriculture lands nearby.

Farmers cultivate shrimp without registering with the Coastal Aquaculture Authority are liable to be imprisoned for three years and levied a fine of up to Rs 1 lakh.

It is mandatory for all shrimp farms to be registered under the provisions of the Coastal Aquaculture Authority Act and Rules, 2005.

The act requires registration of all shrimp farms lying on either side of rivers, creeks and canals. Officials should demolish illegal farms as unplanned shrimp farming is one of the major reasons behind increasing salinity in the coastal belt, according to Rout.