Air quality in several areas in the national capital region has been recorded as ‘severe’ on October 16, 2019, according to data from AQI India website.

At 2 pm on October 16, the air quality in Delhi overall was at 297 or ‘unhealthy’, while several areas in the capital was marked in the  ‘severe’ category, the data showed. 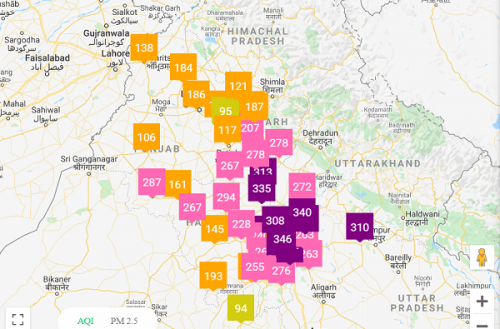 Stubble burning is the major cause of pollution. It is responsible for around 10-15 per cent of this pollution load, according to Indian Institute of Tropical Meteorology (IITM) scientists. “Around 10-15 per cent of this PM 2.5 is due to crop residue burning. The winds are northwesterly currently, coming from Punjab, Haryana and bringing pollution to Delhi,” earlier said Sachin Ghude, scientist, IITM.

There has been a three-fold increase in farm fires around Delhi in the last couple of days. The IITM recorded 12 fires on October 7. This number rose to 46 the next day, 146 on October 11, and 172 on October 12.

Besides Delhi, the air quality is also ‘unhealthy’ in Ahmedabad, in Gujarat; ‘poor’ in Pune, Kolkata and Mumbai; ‘moderate’ in Hyderabad and Bengaluru. The air quality in Chennai is in ‘good’ category, the data showed.

The government has, meanwhile, rolled out Graded Response Action Plan from October 15, which means stricter measures against on use of private vehicles on roads, diesel generators, brick kilns and stone crushers. Those found violating were issued challans, served notices, and also arrested, the media reported.