Even though it is too early to comment on the potential impact of the odd and even formula on air pollution trends in Delhi soon after it was rolled out on January 1, 2016, the signs are optimistic. The Centre for Science and Environment (CSE) had tracked the hourly changes in PM2.5 trends the previous day and compared this with the day of the roll out. The results show a sharper and quicker drop in air pollution levels after the programme commenced at 8 am in the morning of January 1.

This is evident from the real time monitoring by the Delhi Pollution Control Committee in different locations of Delhi. This has provided clinching evidence that if traffic volumes on the roads are cut drastically as it happened on January 1 when the even number cars were off the road and overall traffic volume was low with most institutions closed, pollution levels were lowered.

This indicates if traffic volume is reduced it can have an impact on air quality of Delhi. This signals the need for more enduring measures that will help to curb traffic in the city.

The larger message of the day is that if Delhi succeeds in curbing car congestion, it can make its public transport much more efficient. The first day of implementation has shown how low traffic volumes on arterial roads enabled public transport—buses, autos and taxis to move fast and improve the overall journey speed of the commuting majority in the city. This proves that the city would need more systemic and enduring reforms to restrain car congestion with parking and tax measures, integrated public transport systems, walk and cycling augmentation to make a difference to the quality of air.

Trend in PM2.5 levels on the first day of odd and even formula and the previous day 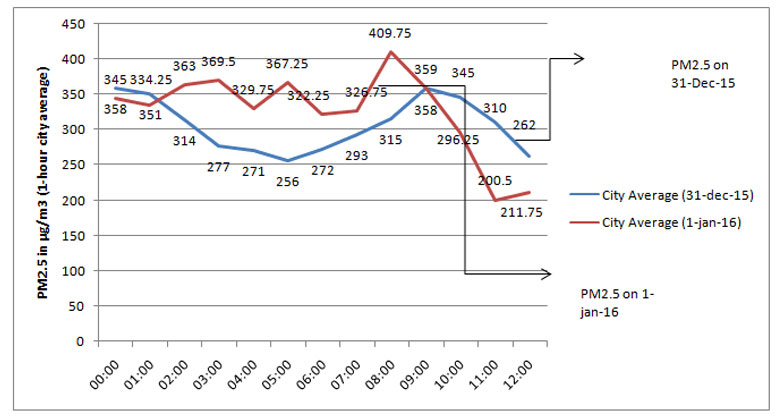