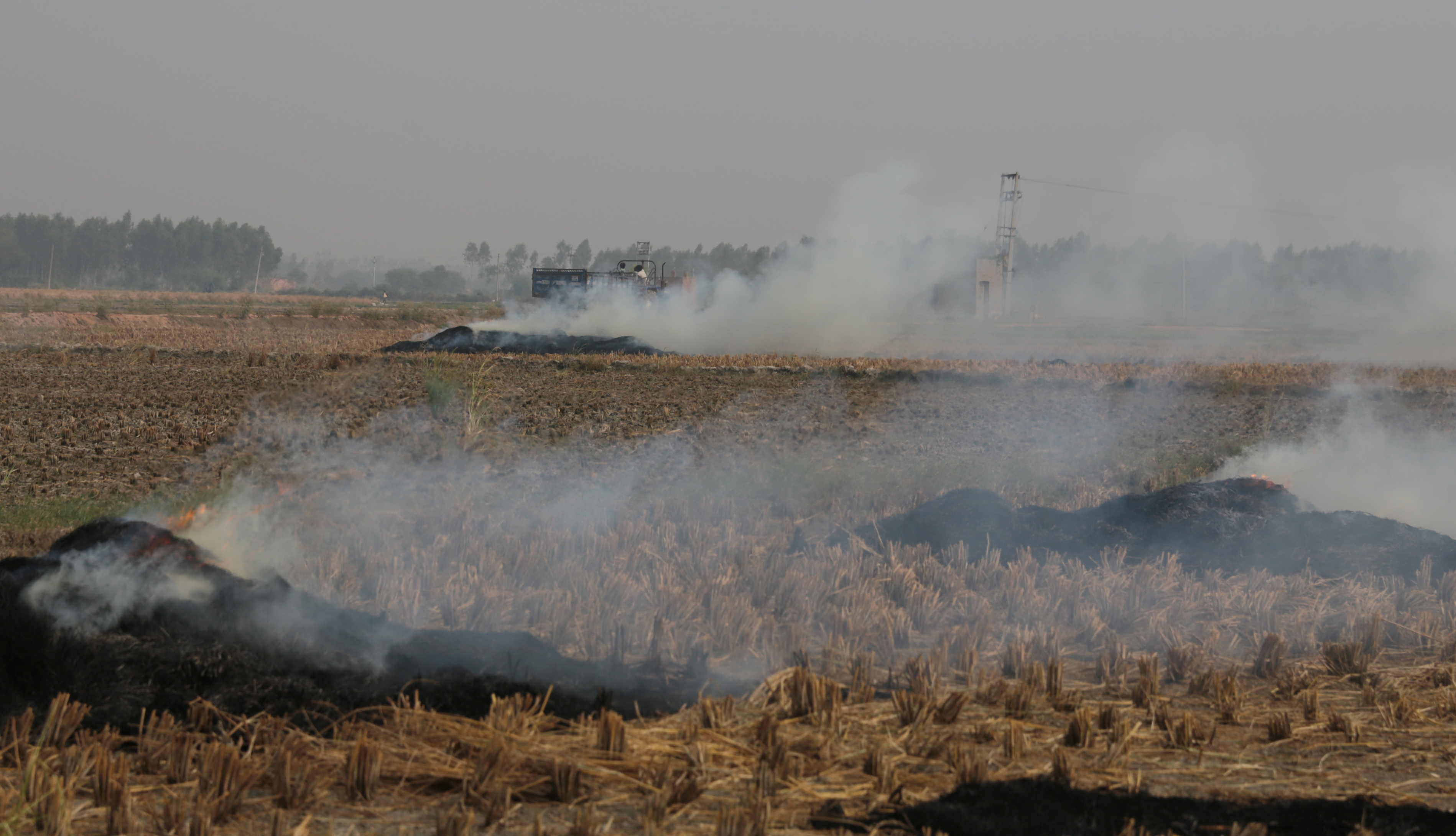 Burning of paddy stubble at Panipat in Haryana. Most farmers prepare their fields for sowing wheat by burning down the crop residues. This is a bad practice as it leads to severe air pollution Credit: Vikas Choudhary

Come winter, and the air quality in northern India begins to deteriorate. A thick blanket of smog (mixture of smoke and fog) engulfs the National Capital Region which reduces visibility and gives a tough time to commuters.

A major reason for the poor air quality is the burning of paddy stubble by farmers in Punjab and Haryana. This practice comes in handy for farmers as they prepare their fields for sowing Rabi crops. However, the thick smoke which emanates as a result of setting fields on fire poses serious health hazards for people. Burning fields also affects the quality of the soil, robbing it of vital nutrients. The smoke contains toxic chemicals which causes respiratory problems and other diseases.

The smoke combined with vehicular emissions make the air we breathe deadly. The national capital is the most affected by bad air quaility as it lies close to Punjab and Haryana.

In India, there are two cropping seaons—Rabi and Kharif. The first one generally starts from April and lasts till October. The Rabi season lasts from November till April. To prepare their fields quickly for sowing wheat and other Rabi crops, most farmers burn the crop residues after paddy harvesting gets over. Every year in Punjab, about 7 to 8 million metric tonnes of paddy residue is burnt openly between October and November. Though erring farmers have been warned by the state authorities, they continue with this practice as it involves no cost.

Experts say lack of adequate machinery makes strict implementation of “not burning fields” impossible. Though farmers are being offered machines on subsidy to clear the stubble, they continue to resort to burning.

Between the paddy harvesting and wheat sowing seasons, farmers get just 15-20 days. To clear the paddy stubble, a large number of machines are required at low prices, which is most often not the case. 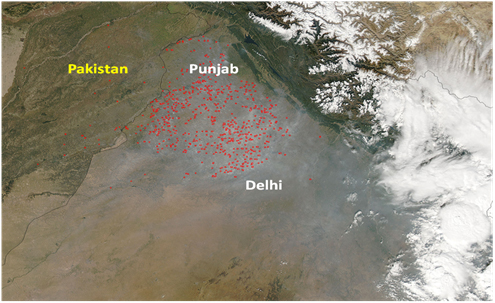 In this image, the red spots show the approximate locations where paddy fields have been burnt in Punjab. The image was released by NASA when its Moderate Resolution Imaging Spectroradiometer (MODIS) aqua satellite passed over Punjab on October 29, 2015.

With continuous burning of paddy fields, Delhi’s air quality is degrading. Data collected from October 30 to November 2 shows that there has been a continuous rise in the Air Quality Index (AQI) of the city. The more the AQI rises, the more people are likely to suffer from adverse health impacts. The monitored value of AQI from October 30 to November 2 ranges from 201 to 297 which falls under the “Very Unhealthy” category. 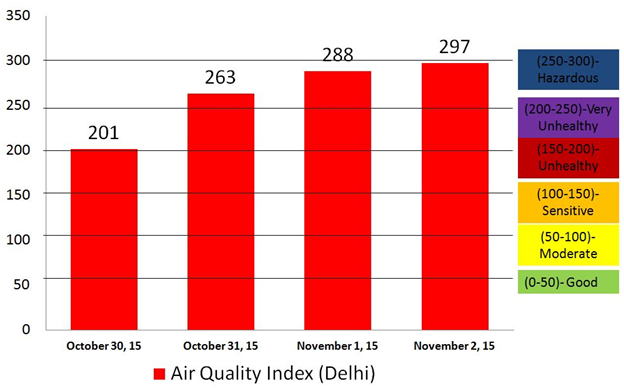 Source: US Embassy data calculated as per Indian standards by SAFAR, MoES-IITM-IMD

Punjab and Haryana are both responsible for causing air pollution due to burning. These two states contribute to 48 per cent of the total emission due to paddy burning across India. Burning of crop residues emits traces of carbon dioxide, methane, carbon monoxide, nitrous oxide, sulphur dioxide and particulates which affect human health. It is estimated that India annually emits 1,44,719 mg of total particulate matter from open burning of stubble.

Poor air quality is especially bad for the elderly, children, and people with chronic respiratory conditions. Pollution as a result of paddy stubble burning can affect the respiratory system and aggravate asthma.

The National Green Tribunal has imposed a complete ban on the open burning of leaves and other materials which emits toxic pollutants into the atmosphere. The Punjab Pollution Control Board (PPCB) has recently issued a notification banning the burning of crop residues across the state. In January this year, Chief Minister Parkash Singh Badal had announced a special grant worth Rs 1 crore to any district which prohibits open burning of paddy stubble.

Though the Punjab and Haryana governments are providing farmers with paddy seeders and shredders at subsidised rates, using them to remove stubble is not common.

Manpreet Singh, chairman, PPCB, said, “It is very difficult to stop this practice of burning as there is no other alternative available for farmers to recultivate on the same of patch of land within a short span of 15 days.”