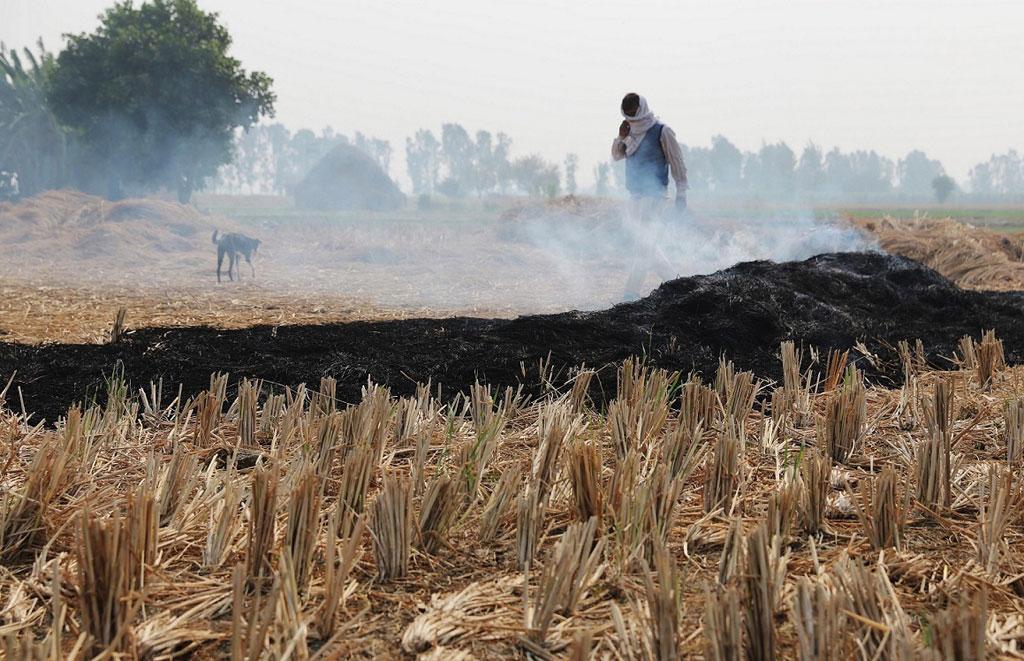 Paddy straw needs to be utilised as biomass pellet fuel that can be commercially sold as the main fuel for an industrial boiler. (Credit: Vikas Choudhary)

Burning of agricultural biomass residue, or Crop Residue Burning (CRB) has been identified as a major health hazard. In addition to causing exposure to extremely high levels of Particulate Matter concentration to people in the immediate vicinity, it is also a major regional source of pollution, contributing between 12 and 60 per cent of PM concentrations as per various source apportionment studies. In addition, it causes loss of vital components such as nitrogen, phosphorus, sulphur and potassium from the topsoil layer, making the land less fertile and unviable for agriculture in the long run.

The main causes of crop residue burning are two-fold. Firstly, there is a very short window of time between harvesting of paddy and cultivation of wheat, at the end of the Kharif season. Paddy, or rice, is a water-intensive crop. The high usage of water in its cultivation has resulted in the central and various state governments restricting the cultivation of paddy in the summer months. In order to prevent diversion of scarce water resources in the summer, paddy cultivation can legally begin only around mid-June, when the monsoons typically arrive over North India. This further delays thecut short to the root with a knife, the large units of harvesters leave 6-10 cm of paddy stalk on the field. The rise in incomes and the subsequent availability of mechanical implements in Punjab and Haryana lead to increased mechanisation of agriculture over the past 10-15 years.

Traditionally, farm labour in these states was in the form of seasonal, migrant workers from the states of Uttar Pradesh and Bihar. Since 2005, the demand for these workers saw a reduction, and accordingly, the availability of assured income from farm labour has declined. The launch of an assured rural income scheme in the form of the NREGA further led to income opportunities in their home states. As a result, agricultural labour has become a scarce commodity in parts of Punjab and Haryana.

The removal of the paddy stalk that remains on the field is a labour-intensive process. With labour being unavailable and the time window for preparing the field for wheat cultivation being limited, the options that the farmer has are either investing in expensive and rarely used agricultural implements, or burning the residue right on the field. Of the two, the latter is both cheaper and requires less effort. 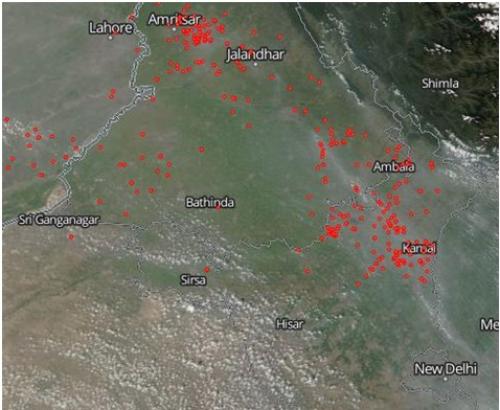 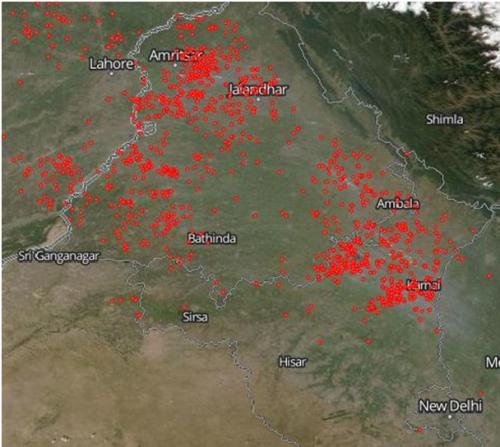 The kharif harvesting season begins in October. These images depict the scale of fires in Punjab and Haryana, over the past few days. Each dot represents acres of farmland on fire, easily detectable by remote sensing technology. The fires began in the first week of October and have visibly intensified since October 10.

Progress made so far

In terms of efforts being made to reduce crop residue burning, the following approaches have been used by various state and central administrations and regulatory bodies so far: 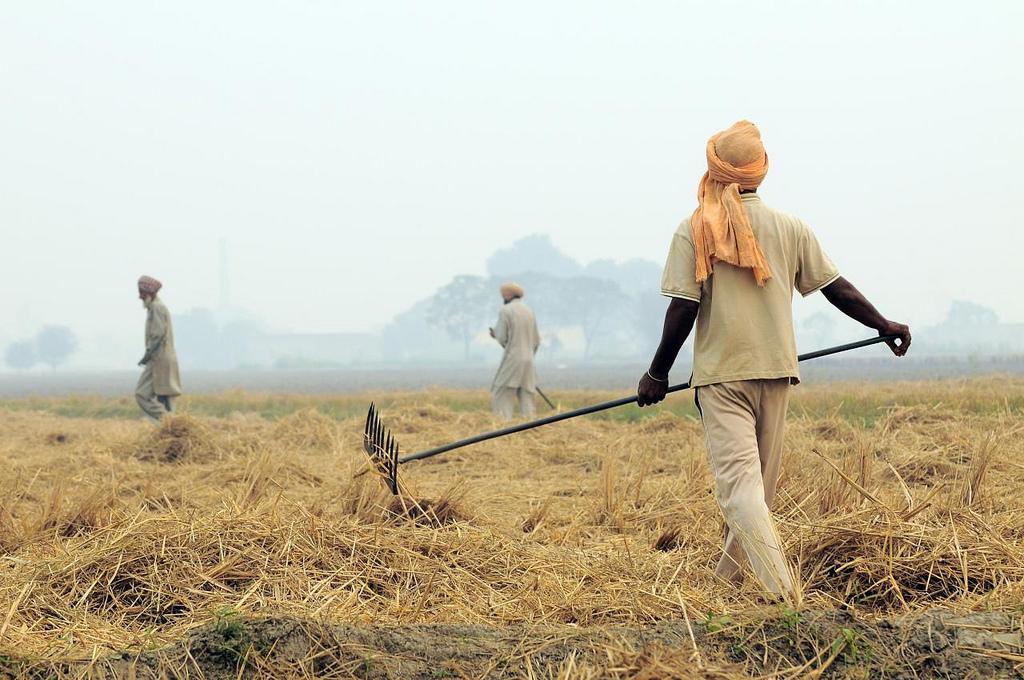 Stronger monitoring and enforcement mechanism through the use of remote sensing technology–use of real-time satellite imagery, along with village-level enforcement teams with the aim of zero incidence rate of crop residue burning, through prevention and penalisation.

Effective and greater scope of subsidy provision, so that agricultural implements can be made widely available. The extraction of paddy straw or any other crop residue from the field is an essential step for its utilisation in power plants, or in any other usage. Currently, this cannot be done manually, owing to supply-sided deficiency in the labour market. The alternative is a provision of subsidy of agri-implements, with the aim of reducing CRB.  Punjab has a proposal to provide subsidy on 67,750 units of agricultural implements, and Haryana has notified a scheme in May to subsidise 1810 units of agricultural implements. This is not sufficient, considering the production of 19-20 million and 2 million tonnes of paddy straw, respectively. One way forward is to promote the co-ownership model. There are more than 1700 existing cooperative and privately-run Agricultural Machinery Service Centers (AMSC), which can be the focus of such subsidies. It is important that the farmer understands the value of the crop residue and wants to use these implements for extraction and packaging.

Creation of a market for paddy straw, along with a mechanism for commercial procurement of paddy straw for use in biomass-based power projects, as fuel in brick kilns and in production of ethanol. Establishment of bio-refineries for utilisation of paddy straw is another viable option. Punjab has projects in various stages of planning utilising 1.5 million tonnes of paddy straw. There’s need to expedite operational status and plan more projects.

Utilisation of paddy straw in the form of biomass pellet fuel, which can be commercially sold as the main fuel for an industrial boiler, as a replacement for coal. Micro-pelletisation establishments need to be incentivised and local usage promoted. Alternate usage of paddy straw to produce paper, card boards, packing materials needs to be promoted, as an alternative to synthetic compounds.

According to Sunita Narain, director general of Centre for Science and Environment, “Farmers should be paid Rs 1,000 per acre under the Rashtriya Krishi Vikas Yojana so they can shun the practice of burning paddy straw. They should be given subsidies for buying Rotavator machines that help cut and mix agricultural stubble with soil. We need to understand why the farmers burn stubble and then deal with the basic problem.”

A problem that recurs every year

Each year, crop burning in the region is the start of the annual escalation of pollutant concentrations in the air, leading to massive winter pollution in the region. It is acerbated by the massive usage of firecrackers in the region, around Diwali, at the end of October. Followed by this, the weather patterns change, making temperatures drop and reducing the dispersion effect of pollutants. Burning of biomass (leaves, and other organic waste) and garbage through thousands of small fires lit for warmth, along with massive MSW landfill site fires only add to making the air full of toxic pollutants and unfit for breathing.