Average PM 2.5 level during 4 weeks of lockdown lowest on record outside monsoon since 2016

The four weeks (through April 19, 2020) — for most of which India was under lockdown — proved to be one of the cleanest for Delhi in the past few years, an analysis carried out by the Centre for Science and Environment (CSE) showed.

Particulate matter (PM) 2.5 and nitrogen dioxide (NO2) levels dipped significantly during the first two weeks after the nationwide lockdown was invoked on March 25 to curb the spread of the novel coronavirus disease (COVID-19) outbreak, the analysis found.

The average PM 2.5 level during these four weeks was the lowest recorded outside the monsoon since 2016.

The average NO2 level was the lowest recorded with the monsoon included. Levels during the four weeks of lockdown were at 24.1 micrograms per cubic metre of air (μg/m3), while the lowest level recorded in 2019 was 29 per cent higher, at 31.1 μg/m3 — for four weeks ending on August 18, 2019.

This implied that the air may be dustier right now, compared to monsoon time. It was, however, considerably less toxic.

PM 2.5 levels fluctuated within four weeks and dropped considerably during the first two weeks. Multiple dust storms hitting the city in the third and fourth weeks, however, led to a moderate increase in concentration levels. 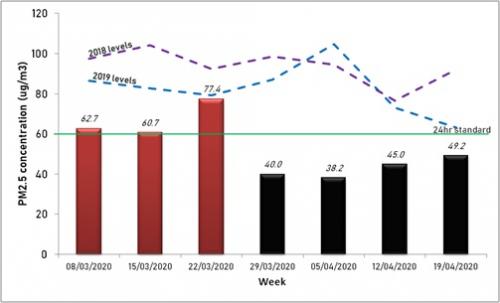 There was a considerable variation in reported PM 2.5 levels among monitoring stations. The highest station-wise drop was noted at IHBAS at Dilshad Garden (85 per cent), with the lowest at Lodhi Road (-28 per cent), between the weeks ending on March 22 and April 19.

The PM 2.5 level seemed to have increased across all stations during the third and fourth week of lockdown, compared to the levels recorded during the first and second week.

This was attributed to multiple dust storms that brought dust from the western arid region to the city in last couple of weeks.

When compared to the same four-week period in 2019, levels were down by 51 per cent.

Weekly NO2 levels in Delhi 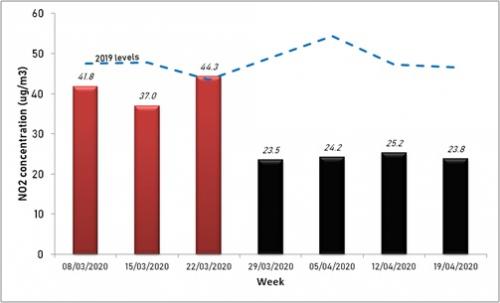 The highest station-wise drop was noted at the city’s ITO area (61 per cent), while the lowest was at Jahagirpuri (-4 per cent) between weeks ending on March 22 and on April 19.

The NO2 levels seemed to be stable across all stations with marginal variations across the four weeks of lockdown.

This stable trend in NO2 was in contrast to the trend noted in PM 2.5 that saw many fluctuations.

This may be due to the fact that NO2 primarily gets in the air from the burning of fuel, mostly emissions from cars, trucks and buses, power plants, and off-road equipment.

PM 2.5, however, has crustal dust that is regularly blown into the city through dust storms during this season.

NO2 levels at select monitoring stations of Delhi