Firecracker sales may go up by Wednesday 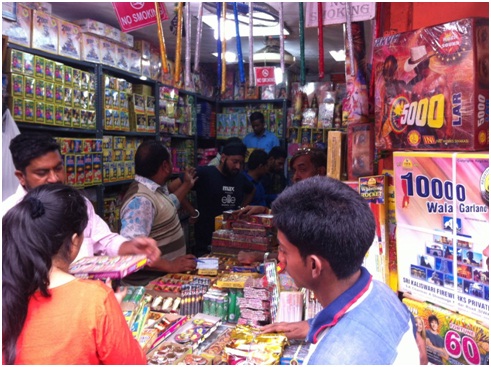 "Firecrackers clearly fall under the Explosives Act of 1884 and are hazardous in nature. They emit sound and foul gases and fine particles." This is what the Delhi High court said about firecrackers last week.

The court also observed that crackers are no less dangerous than other explosives and that their availability should be restricted. The court underlined that firecrackers have no religious sanctity and they not only adversely affect the environment, but also cause ailments.

The high court's statement is the latest to confirm that firecrackers cause dangerous levels of air and noise pollution, putting the health of citizens at risk. Children, the elderly and those suffering from respiratory and cardiac diseases are especially vulnerable.

Reports in the media have highlighted how the sale of firecrackers in Delhi's Sadar Bazar have dipped by up to 80 per cent. But it seems the sellers are hopeful the sales will pick up in the coming days.

When Down To Earth visited the wholesale market, it was teeming with activity. The number of licensed shops in the market have increased with around 70–75 shops as against 60 last year. It is difficult to calculate the exact quantity of crackers sold in the market as a large portion of firecrackers are sold without a licence.

In Sadar Bazar, firecrackers are also being sold along the road in the market. Many of these packs do not have the ingredients printed on them, as is required according to a government order.

However, a positive development this year is that the sale of Chinese crackers has reduced drastically. Since Chinese crackers are louder than 125 decibels, the government has banned them and the police are making sure no one sells them.

Meanwhile, environment secretary for the Delhi government, Ashwani Kumar, has announced that Delhi could soon be following West Bengal by introducing stricter noise limit norms for firecrackers in the state. He said, "We have been charting noise pollution levels on Diwali for the last four-five years and are seeing a definite rise. Though we have been seizing rockets, big bombs and ladhis, which are above 21 grams in weight or create over 125 Db in noise, these norms are themselves quite lax."

West Bengal has shown the way forward by making it clear that the state government can go beyond the national norms to reduce the impact of fireworks on the environment and on human physiology. Delhi hopes to replicate this process and create stricter rules in time for Diwali 2016. This will mean that fireworks sold in the rest of India will no longer be allowed in Delhi, and manufacturers will have to produce a separate set of firecrackers for Delhi, along with West Bengal.