Fireworks make Diwali a dangerous festival for all

Farm fires, firecrackers and burdgeoning vehicular pollution will choke the air in cities and towns this winter. Are we headed towards our worst winter yet? 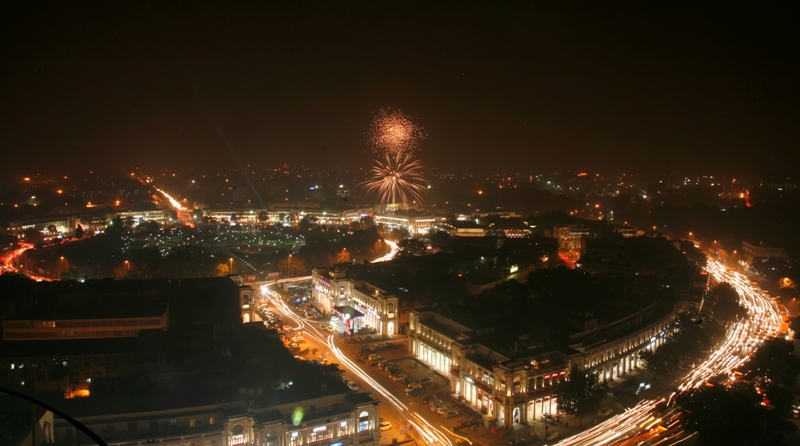 With October begins the season of festivals for almost all of India. Celebrations start with Dassera, followed by Diwali, Christmas, New Year and Sankranti. Winter is also the preferred season for weddings with thousands of lively wedding processions occupying streets. Synonymous with these public and private celebrations is the bursting of firecrackers, often bought in large quantities and exhausted within a few hours.

In India, we burn more than 40 recognised and other dangerous forms of firecrackers, one louder than the other and all of them releasing toxic fumes into the dense winter air. The situation worsens with vehicular pollution and smoke from open burning. Calm and cool weather blocks the dispersal of smoke and pollutants, giving rise to stubborn and toxic smog.

In September this year, parents of three toddlers approached the Supreme Court seeking its intervention to stop the use of firecrackers during Dussehra and Diwali, asserting their children’s right to be brought up in a pollution-free environment. "They are foremost prone to lung disease, asthma, coughing, bronchitis, retarded nervous system development and cognitive impairment," the petitioners submitted in court.

The apex court, however, refused to place a blanket ban on the use of firecrackers and expressed its displeasure over the Centre’s failure to give wide publicity to the ill effects of bursting crackers.

Poison in the air

Air pollution is now the fifth largest killer in India. Every year, 620,000 premature deaths occur in India from air pollution-related diseases, according to "The Global Burden of Disease (GBD) report" by the World Health Organization. Delhi fares badly with a new study revealing that air pollution in the city is responsible for approximately 10,000 to 30,000 deaths annually.

But fireworks are not unique to India. Colourful displays of fireworks light the skies on important days such as the Chinese New Year and New Year's Eve in many cities across the globe. There is, however, a crucial difference. Most countries allow their citizens to only watch the fireworks display. People line up in iconic public places to enjoy the fireworks together.

In the US, more than 23 states have a blanket ban on the sale and use of consumer fireworks. This means that all the fireworks are legally displayed by licenced operators under safe conditions monitored by the local administration. Others have partial bans and stringent time restricitons for the display of fireworks. In Beijing, Shanghai and other major Chinese cities, the use of all fireworks by citizens is banned unless specifically allowed by a licence issued by the local administration.

Air quality data is not readily available for many cities and towns in India. This means it is difficult for laypersons to find out how bad the air we breathe is. A Centre for Science and Environment (CSE) analysis of the Air Quality Index (AQI) data of 14 cities shows that there was only day with "satisfactory" air quality throughout the month of October. Air quality was "poor" and "very poor" in Kanpur, Lucknow, Faridabad, Varanasi and Agra.

Mumbai, Chennai and Bengaluru had around 12 days of "satisfactory" air quality due to breezy weather.

In Delhi, extreme pollution episodes have become all too common during the winters. Last winter, Delhi saw 12 days of smog, with "severe levels" persisting for three consecutive days. In other countries, such levels would have triggered a smog response system bringing in tough pollution control measures.

Smaller metros also appeared to be highly polluted with Raipur, Allahabad and Ghaziabad having higher levels of PM10 than Delhi. 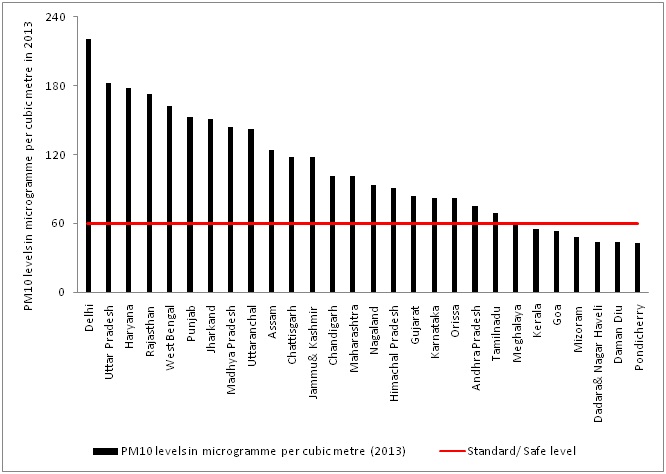 Since 2008, air pollution levels in Delhi have been rising steadily. The city's autmobile numbers have exploded during this period. The city registers 1,400 vehicles a day. This is more than two times of what it was in the pre-CNG period. Over 1.2 million car trips are made daily between Delhi and its satellite cities. Though vehicles have become cleaner with better fuel quality and tighter vehicle emission standards, air quality remains poor because of the drastic increase in the number of vehicles.

Government policy also favours the sale of diesel vehicles. Diesel cars are cheaper and are "legally" allowed higher limits for NOx and particulate emissions even as diesel is branded as a Class I carcinogen by the World Health Organization (WHO). Public transport and urban design are lacking in reach, efficiency and vision, forcing commuters to depend on private vehicles. Trucks headed for or simply passing through Delhi add to the problem.

On October 9, 2015, the Supreme Court had passed an order imposing an Environment Compensation Charge (ECC) of Rs 700 on all light goods vehicles and Rs 1,300 on heavy goods vehicles entering Delhi. This charge is expected to discourage trucks headed for other destinations from entering Delhi. With the contractor expressing its reluctance to collect the additional levy, the case is still being heard in court.