Fuel efficiency standards: Did Centre buckle under pressure from industry?

The government has stalled standards that could have made heavy-duty vehicles guzzle and pollute less. Is it hand-in-glove with the industry or under pressure from it? 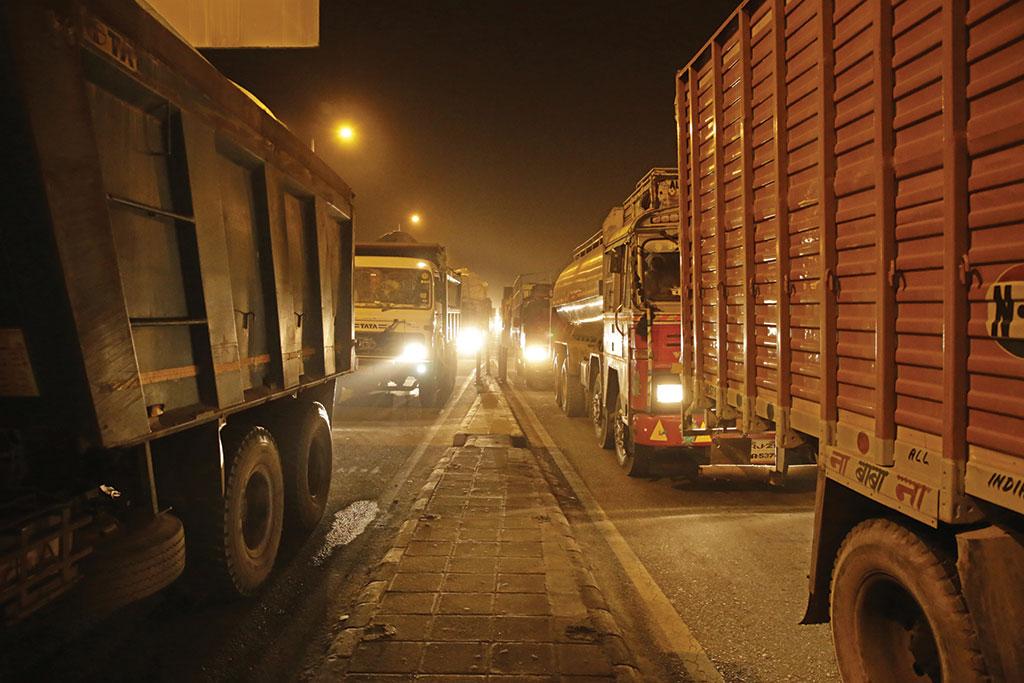 It seems the automobile industry lobby has once again succeeded in undermining India’s efforts to curb greenhouse gas emissions. Or else, why would fuel efficiency standards for heavy-duty vehicles (HDVs) be put on hold just three days before the roll out?

Word has it that on March 29, Nitin Gadkari, the Minister for Road, Transport and Highways (MoRTH) held a closed-door meeting with the ministers and secretaries of the power and the petroleum and natural gas ministries and asked them to look afresh into the standards. These are the ministries that had deliberated for three long years along with industry body, Society of Indian Automobile Manufactures (SIAM), to devise standards to reduce carbon dioxide (CO2) emissions from HDVs as well to reduce the fuel import bill; India depends on imports to meet 80 per cent of its crude oil demand.

The proposed standards were in line with the government’s attempt to create fuel-efficiency norms for vehicle segments in different phases. In 2014, similar norms were introduced for passenger cars. Though HDVs have so far remained scot-free, estimates show that they emit more CO2 than cars as they travel long distances and thus consume more fuel. Besides, almost all HDVs run on diesel, the most polluting fuel.

Going by the notification of the Ministry of Power in August 2017, the standards, applicable to HDVs weighing over 12 tonnes, would have limited the maximum fuel cons umption of goods vehicles (belonging to N3 category) to 2.76-6.82 km per litre. The maximum fuel consumption of passenger vehicles with nine or more seats (under M3 category) was to be limited to 4.22-5.82 km per litre. A report by the sub-committee set up by the petroleum ministry in 2014 to draft the standards, the measures would have helped save 1.27 million tonnes of diesel between 2018 and 2023 (see ‘Missed opportunity’). This means a reduction of Rs 7,564.82 crore in the fuel import bill over five years. This also means prevention of 4.07 million tonnes of CO2 during the period. The figure is significant for a country which under the Paris Agreement has committed to reduce its emission intensity of CO2 by 33-35 per cent by 2030. 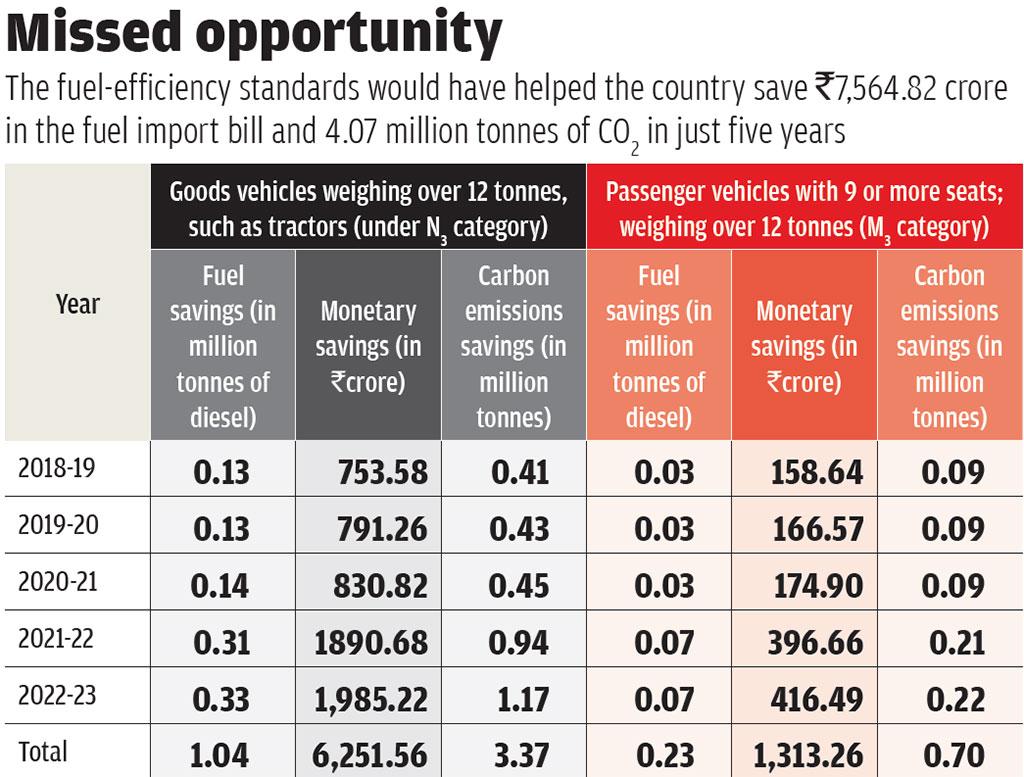 So, why did government bend?

To find the answer, Down To Earth (DTE) contacted all the three ministries involved in the drafting process of the standards as well as industry leaders like Ashok Leyland, Mahindra & Mahindra and Tata Motors. While the ministries dodged DTE queries, there was no response from HDV makers.

Industry insiders say the standards were put on hold after the automobile industry raised its objections related to the calculations based on which the standards have been drafted and would be implemented.

“The standards require each HDV to follow fuel-efficiency norms. But the industry wants to follow the Corporate Average Fuel Economy (CAFE) standards practised in the US,” says Vishnu Mathur, director general of SIAM. Under CAFE, the average fuel consumption of the entire fleet of a manufacturer is calculated, irrespective of the vehicle model. So, even if some models of the manufacturer do not meet standards, the “sales-weighted” average fuel efficiency of its fleet sold in a particular year is maintained. However, Sumant Kumar, former director of Delhi-based Petroleum Conser vation Research Association that deals with energy efficiency, says, “India cannot follow the CAFE system as we do not have sufficient data on individual fuel consumption of vehicles.” Though SIAM used to release fuel-efficiency figures of all vehicle models, it has discontinued the practice since 2008-09 and has been doing so for cars since 2015.

The other major gripe of the industry is about implementation of the standards. And this finds a mention in the 2017 report of the sub-committee. It says SIAM opposes using Constant Speed Fuel Consumption (CSFC) test as a method of calculation. As part of this test, a prototype model is made to run on a test track simulating real-life driving conditions for 4 kilometres at 40 km per hour and 60 km per hour to calculate fuel consumption. Three such tracks are available in India at Pithampur (Madhya Pradesh), Ahmednagar (Gujarat) and Chengalput (Tamil Nadu). But SIAM says CSFC is unscientific as it involves external factors, such as wind speed and humidity, that can impact the performance of the vehicle and can thus show different results when the test is repeated on different occasions. Instead, SIAM wants the VECTO method to be followed, in which all components of a vehicle that influence emissions, such as tyres, aerodynamics, engines, transmission and weight, are tested separately in the laboratory. The inputs are then fed into a software tool to calculate fuel consumption as well the emissions.

The sub-committee had quashed the suggestion saying the track at Ahmednagar is at par with those available internationally. Besides, says its report, the results are repeatable, “as they show no discrepancy when conducted in a different set of occasions”. Though VECTO method of calculation is ideal for India to gradually adopt, it would require a lot of investment on behalf of testing agencies. So much so that if the process had started in 2016, the first set of guidelines would have come only in 2022-23. But India cannot afford to wait so long. Besides, Europe is still working to finalise its VECTO norms, the report adds.

Balraj Bhanot, former director of Pune-based Automotive Research Association, says the industry’s demands are nothing but delaying tactics. The sub-committee report says all concerns of SIAM were resolved while drafting the standards. Then why is it again raising the issues? The industry is reluctant because to fall in line with the standards, manufacturers need to tweak the engines and re-design vehicle models which involves investing in research and development (R&D), he says. Other experts also doubt the industry’s intention as it is now investing in R&D for developing technologies to meet emission norms of Bharat Stage VI, which will be in force from 2020. “The government, instead of giving in, should have enforced the standards. Any changes could have been introduced later,” adds Bhanot.