Government did not do enough to stop crop burning, say farmer representatives 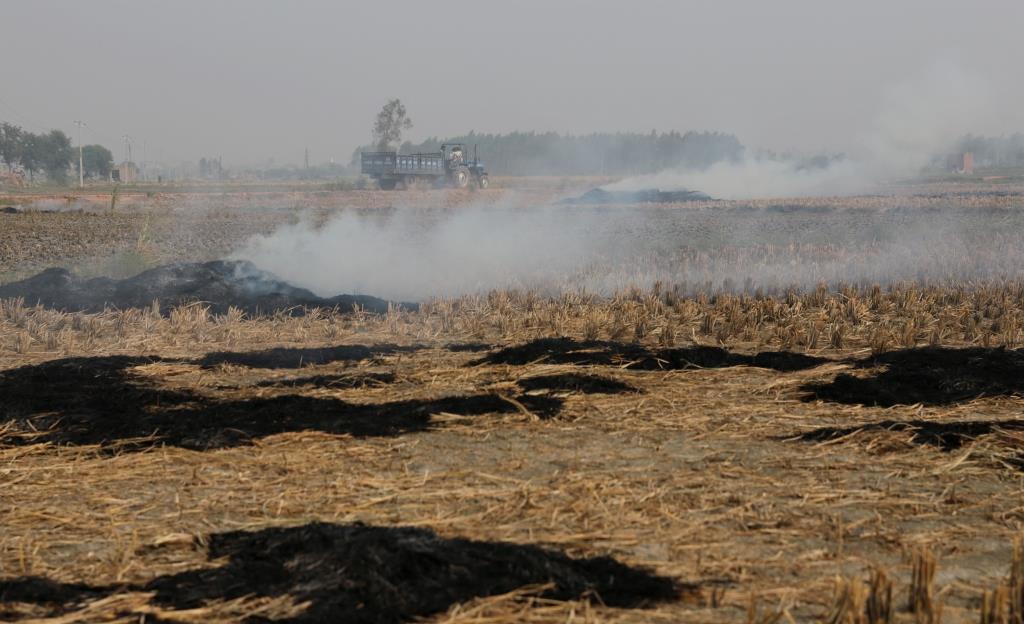 Scientists have repeatedly warned citizens of Delhi about ‘dangerous” pollution levels prevailing in city this week. But with Diwali around the corner, the alerts have not bogged down the consumers from hopping to markets. On Thursday, Mandir Marg and Karol Bagh in central Delhi were two such areas of the capital city that were abuzz with shoppers. By 4:30 on Thursday evening, levels of PM 10 and PM 2.5, tiny particles that enter the blood stream of human beings through lungs, in the same localities were way above the prescribed limit.

Scientists have suggested that burning of crop residue in the neighbouring states is one reason for worsening of air quality. Real time monitoring data provided by Delhi Pollution Control Committee (DPCB), across six monitoring stations in the capital city, reveal that levels of both PM 2.5 and PM 10 were much above the prescribed limit. According to scientists at System of Air Quality and Weather Forecasting and Research (SAFAR), PM 2.5 level is expected to reach the "severe" levels of 252 by Saturday and, PM 10 will stand at 413. The levels have already breached the safe limits of 60 micro gram/cubic metre for PM 2.5 and 100 for PM 10. On Friday afternoon itself, PM 2.5 levels at Mandir Marg were at a maximum of 297 (rated as “poor” by pollution control boards).

According to SAFAR, the air quality that started worsening since October 31 will only improve after November 7. In a recent emergency meet with Environmental Pollution (Prevention and Control) Authority (EPCA) under Delhi government on Wednesday, both Punjab and Haryana representatives had said that after harvesting of the crop in September, farmers usually burn residue in the month of October to prepare the fields for wheat in late November. The minutes of the meeting also reveal that while crop burning may have reduced, farmers have had to resort to such techniques of burning due to reduction in subsidy given by the respective state governments for farm equipment used to collect farm residue.

Both the states submitted before EPCA that the earlier subsidies of up to Rs 4 lakh, given by the Central government on crop residue extracting machines such as rotovators, have been reduced to Rs 50,000. While Punjab government has suggested imposition of section 144 of the Criminal Procedure Code to control crop burning, that basically outlaws assembly of more than 10 persons in an area, Haryana government wants to issue punishments under Air Pollution Act.

EPCA members headed by chairman Bhure Lal, however, insisted on making farmers aware that presence of crop residues in a field does not hamper growth of new crops. While he assured that issue of subsidy will be taken up with the Central government, other members of EPCA suggested that those residues of Basmati that have higher silica content can be used for making high quality manures.

In the meeting, it was also revealed that although both Punjab and Haryana governments had taken several measures to discourage paddy burning, satellite images from October 30 showed numerous instances of crop fires contributing to smog over NCR. EPCA also mandated a two-pronged approach where the states were directed to publicise measures towards halting such fires and penalise recognized major offenders, and also move towards active monitoring of the situation through the states' respective remote sensing capabilities. The agency also asked both Punjab and Haryana to keep it updated by reporting daily data from remote sensing. They were also asked to keep EPCA briefed about the actions taken against the recognised offenders over next 10 days, till November 15. Instances of crop burning are expected to go down once wheat sowing starts around November 15.

Meanwhile, in another significant development on the issue of skyrocketing pollution levels, the private concessionaire appointed by the South Corporation has approached the Municipal Corporation of Delhi to relieve it from of its contract to collect tolls. Earlier, EPCA had responded to each of the 11 queries raised by the concessionaire through the MCD as issues.

Also read: The letter sent by EPCA via MCD to the private concessionaire

Earlier this month, The National Green Tribunal (NGT) had imposed fines ranging between Rs 2,500 and Rs 15,000 on farmers to prevent them from burning paddy fields. Besides this order given on Wednesday, the tribunal had also directed the Delhi, Rajasthan, Punjab, Haryana and Uttar Pradesh governments to notify it about the steps taken to check this harmful practice.

With inputs from Polash Mukerjee