More cars enter Delhi every day than are registered in a year: CSE study 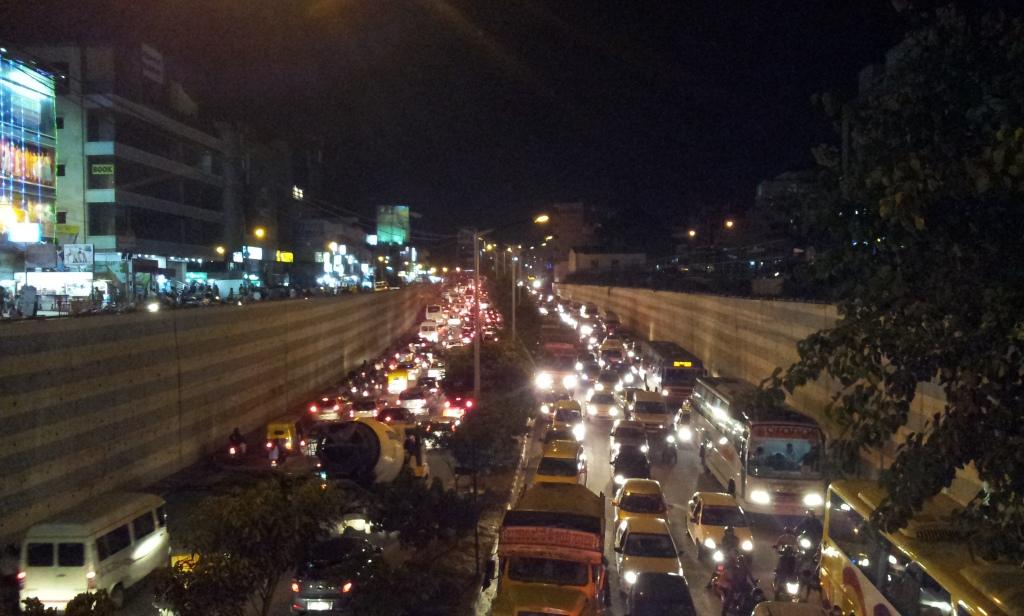 While the world gears up to mark another Environment Day on June 5, a new analysis by non-profit Centre for Science and Environment (CSE) suggests Delhi’s pollution troubles are far from over—despite the stringent action against trucks and the odd-even experiment. A real-time cross-border traffic survey done by CSE has exposed the stunning fact that the number of personal and passenger vehicles that enter Delhi daily—cars, SUVs, two-wheelers, taxis, buses (excluding trucks and light commercial vehicles)—are close to the total number of vehicles that got registered in Delhi in one year - 2014-15. These contribute close to a quarter of the total particulate load from personal and passenger vehicles in the city.

Delhi’s battle against pollution, congestion and energy-guzzling vehicles can get increasingly difficult if its own explosive motorisation gets further aggravated by the daily influx of huge number of vehicles from outside. An equal number of vehicles are going out of Delhi daily, contributing to pollution in NCR towns. This new analysis reconfirms that ineffective public policy on public transport connectivity is increasing dependence on personal vehicles, leading to enormous pollution and ill-health in Delhi-NCR.

While so much effort is being made to bypass polluting trucks, both state and central governments are turning the city roads into highways and elevated high-speed corridors for personal vehicles from the region. This is undercutting Delhi’s effort to control emissions and exposures in all sectors. The incoming vehicles contribute close to a quarter of the total particulate load from personal and passenger vehicles in the city. If this trend is not reversed, it will become increasingly difficult to reduce high exposure to toxic fumes and crippling congestion.

What has this study found?

In the first round of this survey, CSE had analysed only the truck numbers. In this round, both personal and passenger modes were analysed. As personal vehicles do not pay toll, there is no estimate of the share of total vehicles that enter from these nine locations. According to the municipal corporation, these nine entry points are responsible for more than 70 per cent of all incoming truck traffic. Although CSE has considered a similar ratio for personal and passenger modes for extrapolating total entry from all the 124 entry points, this can be an underestimation.

It may be noted that cars and SUVs also include the taxis that cannot always be distinguished in a survey. However, separately, available data shows that there are one lakh taxis registered in Delhi-NCR under the All India Tourist Taxi Permit. Thus, the number of personal cars is still very high. 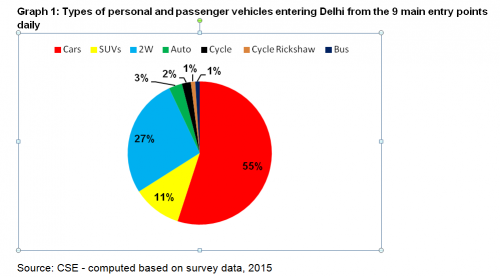 Cars and SUVs coming to Delhi are also the biggest fuel-guzzlers and the highest emitters of heat-trapping carbon dioxide: Emission of carbon dioxide, that traps heat, is also a measure of fuel consumption by vehicles. The incoming cars have the highest per capita CO2 emissions—3,031 gram/km (gm/km), followed by SUVs at 1,919 gm/km and two-wheelers at 988 gm/km. The incoming bus passengers have the smallest carbon footprint of 539 gm/km. With this trend, how will Delhi-NCR contribute towards India’s INDC commitment of reducing energy intensity by 35 per cent by 2030? 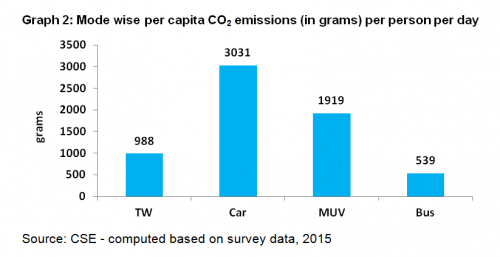 Even though buses are a mere one per cent of the incoming fleet, they carry 30 per cent of the commuters from NCR: There is a huge potential to expand this transport that has been ignored so far. It is extremely worrying that the trend in number of buses and ridership is declining continuously. The number of buses of Delhi Transport Corporation have sharply fallen from 6,077 in 2011-12 to 4,977 in 2014-15; the average daily ridership of DTC has reduced from 47 lakh per day in 2012-13 to 39 lakh per day in 2014-15—a drop of 17 per cent. 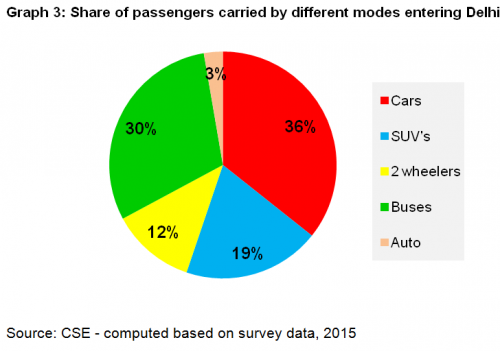 Incoming NCR traffic is undercutting the air quality and health benefits from local measures to reduce toxic air pollution, especially diesel pollution: Delhi has moved all its buses, autos and taxis to CNG and is trying to control dieselisation of cars. It has also reduced the influx of trucks from outside. But this is getting negated by the huge influx of personal and passenger vehicles, especially the diesel ones. Daily, the total number of diesel cars, taxis and SUVs that enter Delhi from NCR are 2.5 times the total registration of diesel segments in Delhi during 2014-15. Diesel-related pollution is already increasing in Delhi. Particulate matter, nitrogen oxides and ozone are high and increasing in Delhi’s air. On about 56 per cent of the days during April and May this year, the ozone levels have exceeded safe standards.

Toxic fumes from local and incoming vehicles contributing to growing cancer risk in Delhi: A CSE analysis of the National Cancer Registry Programme Report of 2012-14 shows that the incidence of cancers is highest in Delhi among the major Indian cities. The single most common is lung cancer that is also associated with exposure to polluted air, especially diesel pollution—in this case, Delhi is second only to Kolkata. Among all the fuels used in Delhi, diesel is still at the top. To that, is added the daily influx of diesel vehicles that are higher than the local fleet. Lung cancer incidents have increased by over 33.3 per cent since the middle of last decade in Delhi.

State and Central governments are working to bypass trucks but are aggressively pushing highways and elevated arterial roads for personal vehicles through Delhi: All this is creating huge pressure on roads and urban land for parking. If we consider just the cars and SUVs that enter Delhi daily, they occupy a land area for parking that is equal to 320 Feroz Shah Kotla cricket stadiums! After saturating the existing road network (21 per cent of Delhi’s geographical area), the Delhi government plans to have more elevated corridors to facilitate vehicular movement and tap personal traffic from the NCR catchment. Out of the 10 elevated corridors planned, three will originate outside or at the borders of Delhi. The remaining corridors are also all linked to national highways including NH10, NH8, NH1, Noida Connector and Faridabad. These will tap and facilitate enormous vehicular movement from the NCR catchment. Even the proposed elevated BRT corridors are planned with high speed motorised lanes.

The Central government has planned three inter-state high speed corridors connecting Uttar Pradesh, Haryana, and Rajasthan that can lead to massive vehicle influx. Delhi already faces the challenge of moving at least 2.8 crore trips a day by 2021. If more than 80 per cent of this is not on sustainable modes and more staggering numbers are added every day from NCR, Delhi can become unliveable in the not-too-distant future.

In this pollution and congestion battle, Delhi is running only to stand still. Both the Central and the state government will have to recognise the implications of road infrastructure that gives priority to vehicles for overall motorisation and related problem of pollution, congestion and energy guzzling.

Both state and Central government will have to prioritise scaling up of affordable, comfortable and reliable public transport service and cycling and walking infrastructure while promoting compact city design to reduce dependence on personal vehicles in Delhi and NCR.

The Central government will have to immediately notify Euro VI emissions standards to be implemented by 2020. There is a need for strategies to discourage diesel vehicles with strong fiscal and regulatory measures and push all fuels and technologies to get cleaner. Simultaneously, ensuring time bound implementation of the source-wise pollution action plan will have to be ramped up in Delhi-NCR.