According to the green tribunal, crop burning is a serious issue which contributes to global warming and causes air pollution 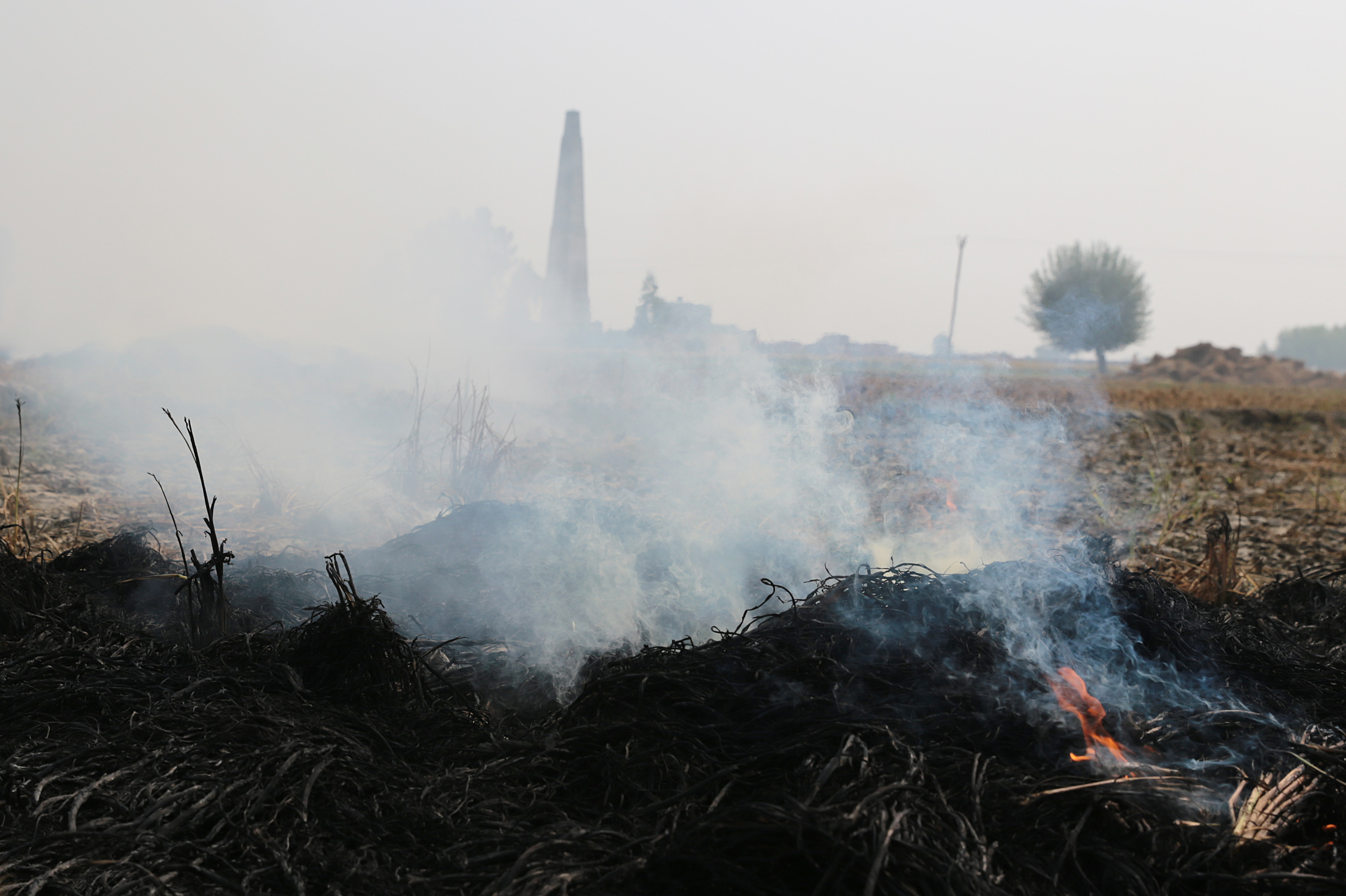 The National Green Tribunal (NGT) has imposed fines ranging between Rs 2,500 and Rs 15,000 on farmers to prevent them from burning paddy fields.

Besides this order given on Wednesday, the tribunal also directed the Delhi, Rajasthan, Punjab, Haryana and Uttar Pradesh governments to notify it about the steps taken to check this harmful practice.

Acting on the latest data supplied by petitioner and environmental lawyer Vardhaman Kaushik, the NGT’s principal bench headed by Justice Swatanter Kumar said that crop burning was a serious issue which contributed to global warming and air pollution.

Directing the five states to impose fines on erring farmers, Kumar added, “The burning of (crop residues) remains a serious issue contributing towards global warming and environmental pollution. You all are putting the (lives) of people and children in danger and they are (falling) sick. You cannot allow them to suffer.”

To prepare the field for sowing wheat, farmers burn the paddy stubble as it involves no cost. However, toxic chemicals are released into the atmosphere due to this.

The thick smoke which emanates as a result of setting fields on fire poses serious health hazards for people. Burning fields also affects the quality of the soil, robbing it of vital nutrients. The smoke contains toxic chemicals which causes respiratory problems and other diseases.

The national capital is the most affected by bad air quaility as it lies close to Punjab and Haryana where paddy burning is common.

Every year in Punjab, about 7 to 8 million metric tonnes of paddy residue is burnt openly between October and November. Though erring farmers have been warned by the state authorities, they continue with this practice.

Experts say lack of adequate machinery makes strict implementation of “not burning fields” impossible. Though farmers are being offered machines on subsidy to clear the stubble, they continue to resort to burning.

Between the paddy harvesting and wheat sowing seasons, farmers get just 15-20 days. To clear the paddy stubble, a large number of machines are required at low prices, which is most often not the case. 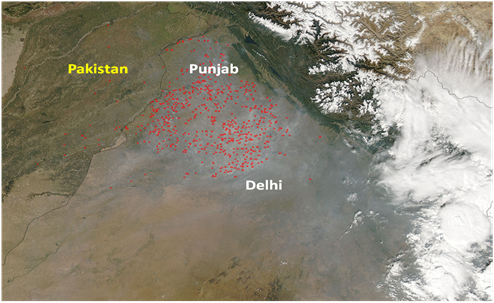 In this image, the red spots show the approximate locations where paddy fields have been burnt in Punjab. The image was released by NASA when its Moderate Resolution Imaging Spectroradiometer (MODIS) aqua satellite passed over Punjab on October 29, 2015.

The petitioner said at 10 pm on Tuesday, the website of the Delhi Pollution Control Committee (DPCC) had shown that the particulate matter (PM) in the national capital stood at 460 mg per cubic metres as against the maximum of 60 mg per cubic metres. The percentage of carbon monoxide and nitrogen dioxide was also high.

With continuous burning of paddy fields, Delhi’s air quality is deteriorating. Data collected from October 30 to November 2 shows that there has been a continuous rise in the Air Quality Index (AQI) of the city. The more the AQI rises, the more people are likely to suffer from adverse health impacts. The monitored value of AQI from October 30 to November 2 ranges from 201 to 297 which falls under the “Very Unhealthy” category. 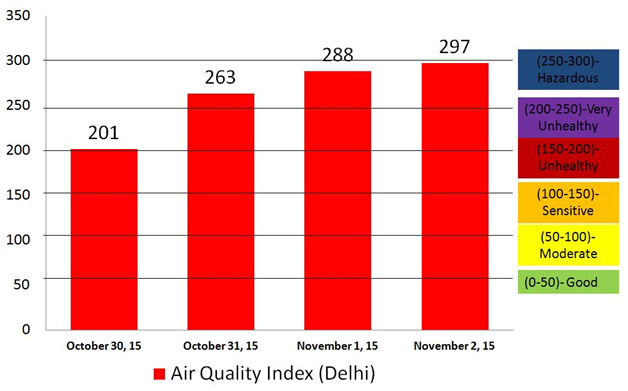 Source: US Embassy data calculated as per Indian standards by SAFAR, MoES-IITM-IMD

Punjab and Haryana are both responsible for causing air pollution due to burning. These two states contribute to 48 per cent of the total emission due to paddy burning across India. Burning of crop residues emits traces of carbon dioxide, methane, carbon monoxide, nitrous oxide, sulphur dioxide and particulates which affect human health. It is estimated that India annually emits 1,44,719 mg of total particulate matter from open burning of stubble.

Poor air quality is especially bad for the elderly, children, and people with chronic respiratory conditions. Pollution as a result of paddy stubble burning can affect the respiratory system and aggravate asthma.

According to the legal counsel of the petitioner, Salik Shafique, the bench stated in its order that all the member secretaries and district magistrates (DM) of the five states would be held personally responsible for any crop-burning activity.

The DMs of these five states have also been asked to form district-level committees comprising members from panchayats to spread awareness about the hazards of crop burning and recycling the residue to make organic manure.

The state governments have been asked to pay subsidy on machines such as paddy seeders and shredders based on the size of land holdings. For holdings less than 0.8 ha, such machines will be given free of cost. Land holdings measuring between 0.8 to 2.02 ha will have to pay Rs 5,000 per machine and those owning more than 2.02 ha will have to shell out Rs 25,000 per machine.

Vikrant Tongad, an environmental activist working with the Noida-based Social Action for Forest and Environment (SAFE) has welcomed the NGT judgment.

However, he said that farmers might become victims of the administrative rep-tape. “We welcome the judgment. However, the state governments and the court itself must ensure that farmers do not suffer in the end,” he added.

The NGT has also asked the state governments to find out ways to properly utilise crop residues. The tribunal said if any state had already issued a notification in this regard, then it should ensure its compliance.

The bench also noted that global warming is having its own effect. “The month of September has been the hottest month in 136 years. Crop burning is expected to be one of the most serious contributors to pollution and ecology, besides vehicular emission, dust and burning of other materials,” Kumar said.

Is Centre to be blamed?

In a meeting convened by the Environment Pollution (Prevention and Control ) Authority on how to control air pollution, representatives of the Punjab and Haryana governments said that the Centre had reduced the subsidy on farm equipment used for extracting crop residues by 90 per cent. This has led to farmers burning crop residues, they said.

The Haryana government stated that there was a reduction of 3 per cent in emissions resulting from crop burning in 2014 as compared to previous years. 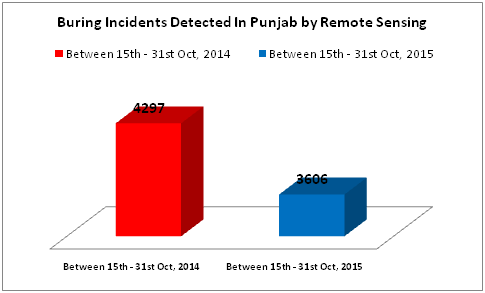 The representatives informed during the meeting that the state pollution control boards were monitoring the emission level. But while both Haryana and Punjab have enacted laws to stop the burning of crop residues, there are no penalties charged, they said.

The environment pollution control authority has directed the officials of both the states to collect remote sensing data on a daily basis. It asked the states to spread awareness about the harmful effects of paddy burning among the farmers.

On Monday, Delhi Chief Minister Arvind Kejriwal directed environment minister Imran Hussain to take up the issue of crop burning with the state governments of Punjab and Haryana.