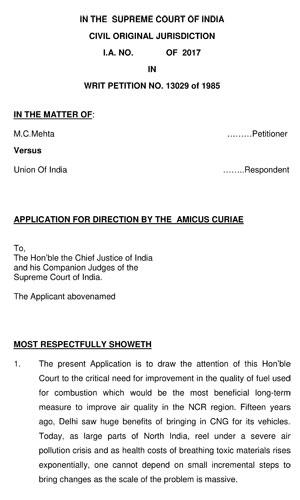 The Supreme Court has today asked the Union Government to send a response on the progress of implementation of new emission norms for coal-based power plants, which will come into effect from December 2017. The apex court issued this notice in response to the Interlocutory Application (IA) filed by a senior advocate and amicus curiae Harish Salve in the ongoing air pollution case of M. C. Mehta. vs. Union of India and others.

The Union government has to respond by December 4.

In his application, Salve argued that the Centre should consider implementing the 2015 emission standards for power plants as per schedule. In view of the severe air pollution crisis and exponential rise in health costs, Salve stressed on the fact that improving quality of fuel used for combustion "would be the most beneficial long-term measure to improve air quality in the Delhi-NCR region".

The latest analysis of the coal-based power sector by Centre for Science and Environment (CSE) indicates that the sector is all set to avoid complying with the new emission norms that will come into effect shortly.  Power companies now want extension for up to five years to implement the cleaner norms.