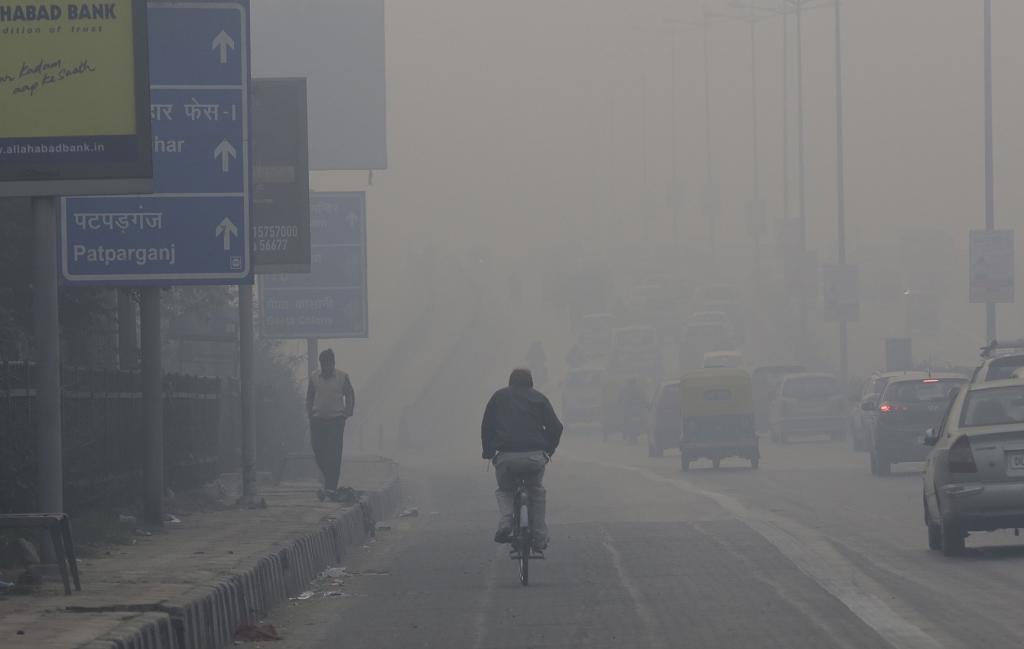 The right to breathe is fundamental, said the EPCA chairperson. Credit: Vikas Choudhary/CSE

Delhi and its surrounding region’s air quality is showing the first signs of improvement, but the air is not even close to being called clean yet – says an assessment report released today by the Environment Pollution (Prevention and Control) Authority (EPCA).  The report comes as the winter of 2017-18 draws to a close, and after a critical period in the fight against air pollution in Delhi-NCR.

“This reduction in pollution levels shows that we can make a difference. But the air is not completely clean yet. We must not lose the momentum in our fight for clean air. We must not lose sight of the fact that right to breathe is fundamental,” said Bhure Lal, EPCA chairperson, while releasing the Report Card.

“The air in this region of the National Capital is so polluted and toxic, that all our combined efforts have reduced pollution merely from the severe-severe plus category to poor-very poor category,” pointed out EPCA member Sunita Narain. “Remember, very poor category is still deadly. According to the health index of the government, prolonged exposure to this level of pollution is hazardous, even for healthy people. This means that all of us breathing this air are exposed to toxins and this will impact our health and more importantly, health of our children. Therefore, we need to do much more to reduce pollution and bring it to the good-moderate level,” she added.

Data from October 1, 2017 to February 25, 2018 points to a slight improvement in air quality levels. An analysis of the Central Pollution Control Board’s air quality index data shows that the number of days in the severe category has decreased for each month in comparison to the previous year, except in January. In February, 16 per cent of the days were in the moderately poor category, compared to 8 per cent in the previous year.

“Overall, there is a small difference – the number of days in the poor-very poor category have increased as compared to the very poor-severe category,” says Narain.

But there is a word of caution as comparison of PM2.5 concentrations at four monitoring stations – Mandir Marg, Punjabi Bagh, R K Puram and Anand Vihar – show that the impact is not visible yet. Pollution levels remain high. The data on the hot-spot pollution areas, in particular Anand Vihar, also shows that pollution levels are extremely high – and do not show any sign of improvement.

“The Graded Response Action Plan and the emergency actions that were taken have had an impact. However, we must not lose sight of the challenge,” Narain said.

The agenda for future

The report of EPCA lists the actions that have already been taken and tracks those that need to be taken. Lal said that actions which needed to be taken immediately included augmenting public transport, move towards cleaner fuels, implement directions for not burning of garbage and dust management and subsidising farmer’s technologies.

“It is important not to lose the momentum for clean air. It is also important to realise that even with all this attention and work done, we have only improved air quality marginally and that levels remain at poor-very poor category. This is hazardous for health,” added Narain.

“We say this because current levels of air pollution are unacceptable and are a serious health issue. The damage to human health because of toxins in air must not be under-estimated,” says the EPCA report card.

“This report card presents the actions taken till now and the work that needs to be done. It is designed to keep us on track, so that we can win this battle for our right to clean air. It is clear that all governments are extremely cognizant of the challenge and are taking measures to reduce deadly air pollution. But it is equally clear that we will need much more enhanced action and at much greater speed,” she said.