Smallpox scare leads to panic purchase of its vaccine 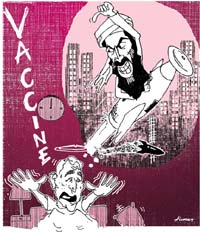 Even Russia and the us are mulling proposals to start vaccinating their populations against the disease. However, the potential adverse effects of the vaccine are being hotly debated too. The vaccine can cause people to develop a swelling around the site of the inoculation, headache and nausea. In people with weakened immune systems, it can cause illness. And in one to two persons per million, it can even prove fatal.

According to the Pentagon, the us defence department and Canada have signed an agreement to collaborate on developing a new generation of smallpox vaccine for their military personnel. Moscow, too, seems keen to revaccinate its entire population. However, Lyubov Voropayeva, a spokesperson for the Russian health ministry, said no decision could be made until the World Health Organisation (who) determines the fate of the world's two remaining declared stockpiles of the virus -- in Atlanta and Novosibirsk, Siberia. Both Russia and the us are against destroying the viral stocks for now. They believe that if studied properly, the virus can help in the manufacture of new drugs and other medical defences.

In another development, a study has found that the 15.4 million doses of aging smallpox vaccine currently in the us stockpile can be diluted by a factor of five or 10 without losing its potency.

Meanwhile, a large section of us officials is worried at Russia's revaccination plans. The Defense Intelligence Agency of the us alleges that Russia had shared smallpox technology with Iraq and North Korea in the early 1990s.