Andaman takes measures to save Jarawas 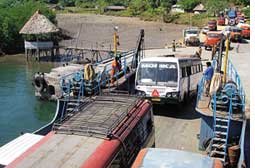 though not in the near future, the Jarawa tribe in the Andaman and Nicobar islands may be in for some respite. Officials are planning to stop use of the first stretch of the Andaman Trunk Road (atr) that connects south Andaman with the north and middle Andaman islands while passing through the Jarawa Tribal Reserve. The Union territory's tribal welfare department has proposed an alternative sea route. "If we can control the flow of tourists on atr, especially the stretch where the Jarawas live, the problem will be solved to a large extent," said S K P Sodi, secretary to the department.

Controversy over atr has existed for over a decade now. Says Sopie Grig, of Survival International, London, "Other people's notion of development must not be imposed upon the Jarawas. Any change there must happen slowly and at their initiative. Otherwise, it will result in diseases, a breakdown in their way of life and their confidence in their own abilities." Survival International and many such ngos have been demanding closure of atr to protect the Jarawas from extinction. According to a recent survey, there are only 332 of them left.

Officials, however, said that the first stretch was the problem and hence they chose an alternative route. "The new route will mean travelling by sea from Shorepoint village in South Andaman to reach Middle Andaman without using the first stretch of atr," said Govind Ram, executive secretary of Andaman's Adim Janjati Vikas Samiti, an autonomous body dealing with tribal welfare.

But it's a long process. Even if the proposal gets cleared this year, it will take four or five years to materialize. Experts believe there is no need to spend crores of rupees on construction of new roads and a harbour at Shorepoint village, which is only a few hours away from Port Blair. "Passengers from Port Blair should be ferried to Baratang area (the atr is used to get to this tourist destination), located between middle and south Andamans. This will save the government both time and money and also spare the Jarawas from exposure," said Samir Acharya, secretary, Society for Andaman and Nicobar Ecology, a local ngo. He adds there are ready solutions in place. "Ferry services from Port Blair to Baratang were introduced earlier, but later they were withdrawn," he said.

For tour operators, though the atr is a source of sure income, activists are happy because the administration has initiated some measure towards protection of Jarawas.