Andaman and Nicobar Islands and Lakshadweep islands have recently been named as the new "hope spots" by the International Union for Conservation of Nature (IUCN) and Mission Blue, an organization involved in the study of oceans.

A hope spot is an area of an ocean that needs special protection because of its wildlife and significant underwater habitats.

The two group of islands, considered extremely rich in marine biodiversity, are the first places in India to have been added in the list of 50 global 'hope spots'. Earlier, 13 hope spots had been identified all around the world. The additional list of 31 new hope spots was released by IUCN and Mission Blue on October 23.

Some of these areas are already designated as protected areas by the government while the others need special protection.

About 12 per cent of land around the world is under some form of protection (as national parks, world heritage sites, monuments) while less than one per cent of the oceans is protected. By identifying such hope spots, IUCN wants to “scale up the marine protection necessary for sustainable development of the ocean”.

“We have identified a number of critical areas that represent a real hope to restore the health of our imperiled ocean,” IUCN said while quoting Sylvia Earle, oceanographer and IUCN patron. “The ocean, as a system and our life support, is in trouble and whatever we can do whether it’s in our community, state or country, region, or in the high seas, we should really respect what the ocean gives us,” Earle added.

Out of total 4,947 sq km area of Andaman and Nicobar Islands, 1,510 sq km is protected under India's Wildlife Protection Act, 1972. There are 105 protected areas in the islands, of which about 100 are marine protected areas (MPAs). These cover more than 30 per cent of terrestrial areas  of islands and protect  more  than  40 per cent  of  the available coastal habitats  of  the islands. However, in Lakshadweep group of islands, Pitti (0.01 square kilometer) is the only island that has MPA tag. 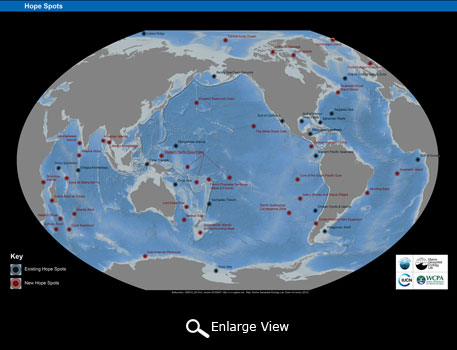