Army, navy and air force on stand-by for emergency rescue and relief 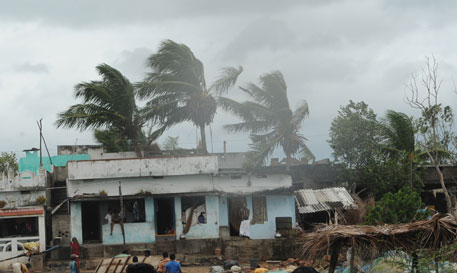 Andhra Pradesh government has made elaborate arrangements to face the very severe cyclonic storm, Hudhud, which is expected to make landfall near Visakhapatnam around noon today.

Both Srikakulam and Visakhapatnam are experiencing heavy rains and lashing winds since Saturday afternoon. The cyclonic system has strengthened, with wind speeds at more than 180 km/hr. Visibility in Visakhapatnam has dipped to 500 m and the sea is rising in big storm surges. Hundreds of trees and electric posts have been uprooted.

According to Arvind Kumar, special officer in charge of relief operations, more than 300,000 people have been evacuated from Visakhapatnam, Srikakulam, Vizianagaram and East Godavari districts so far. Arrangements are in place to evacuate more than five lakh people. People from coastal villages are still pouring into shelters.

In all, 436 villages across 64 administrative blocks in the five districts have been identified as exposed to heavy threat from the cyclone. The government has kept 370 relief camps ready for the evacuated people in these districts. According to the disaster management officials, 13 National Disaster Response Force (NDRF) teams have been deployed in the districts while the Indian Air Force has sent three helicopters to Visakhapatnam. Army personnel have been kept ready in Visakhapatnam, while the eastern naval command has kept four ships on stand-by, equipped with rescue equipment and relief materials. Six aircraft are standing by at the Naval Air Station INS Dega to undertake reconnaissance, rescue, casualty evacuation and airdrop of relief materials.

The meteorological department had warned of extensive damage to kutcha houses, uprooting of big trees, partial disruption of power and communication lines and minor disruption of rail and road traffic. Flight and train services have been cancelled and national highways have been closed to minimise casualties.

Chief Minister N Chandrababu Naidu is keeping an eye on the situation with top officials.