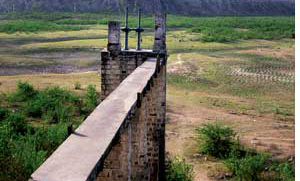 THE Supreme Court on May 8 banned mining activities in Faridabad, Gurgaon and Mewat districts of Haryana. The ban will be in force till the state comes out with a report on how it will restore the ecology of the 450 sq km area, including the lakes around the Aravalli hills, laid waste by mining. The court passed the order on a 1995 petition that was later merged with the omnibus forest case the court has been hearing since 1996.

The apex court till now had been stressing on balancing mining with ecological concerns but satellite images showing dried lakes convinced the judges an immediate ban is needed. The state government and the mining lobby had been using the leeway given by previous court orders to carry on mining.The restoration plan is to be evaluated by the Central Empowered Committee which advises the Supreme Court on forest related matters and the Union Ministry of Environment and Forests. "The court first decided to deal with the mining issue due to public outcry against the lakes drying up. Other issues like encroachment will be taken up later," said Ravi Kant, legal adviser to the Faridabad-based non-profit, Shakti Vahini, that has been lobbying against mining in the area. The mining debris has blocked the natural channels that feed the lakes and deforestation has led to soil erosion and increased run-off that no longer recharges groundwater.


Chief minister Bhupinder Singh Hooda on February 27 said Badkhal and Surajkund lakes in Faridabad and Dumdama lake in Gurgaon would be revived before the Commonwealth Games, 2010. But his government's department of geology and mines went ahead with auctioning of mines in Sirohi and Khori Jamalpur villages in Faridabad on March 3, 2009, without bothering about environmental consequences. It was another matter that no one came forward with a bid because of the ongoing court case. The apex court stayed the auction on March 18.

The Badkhal and Surajkund lakes, 20 to 30 km from New Delhi, were picnic hotspots till the 1980s. Now the dry lake-beds are used for sports events to highlight their condition. The Dhauj Jheel in Faridabad too is drying.

The Supreme Court in 1996 had directed mining leases could not be renewed within two to five kilometre radius of Badkhal without permission from the central and state pollution control boards. Mining in other areas continued unabated. Hooda justified mining by saying that the lakes had not dried up because of mining alone. The mining lobby said pretty much the same in court: the groundwater depleted because Delhi Government sunk tubewells near the border.

State tourism minister Kiran Chaudhary disowned any responsibility for the lakes. She said she was responsible only for the commercial complexes in the lake resort. "The irrigation department is responsible for filling the lake," she said.


The only plan so far to revive the Badkhal lake, prepared by the Haryana Urban Development Authority (huda), proposed filling the dry bed with slurry from the thermal power plant near National Institute of Technology, Faridabad. Officials said the flyash would settle at the bottom of the lake and then the clear water above could be used for water sports. But water contaminated with flyash will have heavy amounts of toxic nitrates and heavy metals, pointed out S P Datta, director of Nuclear Research Laboratory, Indian Agricultural Research Institute, Delhi. "A system for removing the flyash will have to be incorporated in such a plan and that will be very costly," he said.

As for the Surajkund lake, Chaudhary said she had given the relevant file to the culture ministry, overseeing the lake's rejuvenation plan. The Archaeological Survey of India (asi) that has to implement the plan said it could revive the lake only if the state does something about restoring the catchment area. "The state should take care that water channels feeding the lake are not disturbed," said B R Mani, joint director general, asi. No department is willing to take responsibility to restore the lakes; no one knows who will.