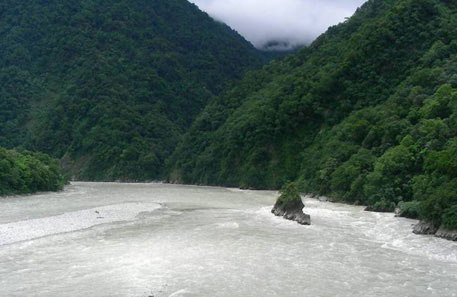 The National Green Tribunal in an order has declared that the Assam Government is not a “necessary party” to the ongoing legal tussle between environmentalists, project promoters and the Arunachal Pradesh government. The contentious issue is dam development for hydroelectric power generation in Arunachal Pradesh. The tribunal issued its order on a petition challenging grant of environmental clearance to the 1,750 MW Lower Demwe Project in Lohit district of Arunachal Pradesh.

A group of ministers (GoM) was appointed by the Assam government in December 2011 to study issues related to hydel power development in Arunachal Pradesh. While the recommendations have been recently adopted by the government of Assam, the tribunal chose to ignore them.

In February 2012, the state minister of ower, Pradyut Bordoloi said that the Assam government adopted all the key recommendations of the empowered GoM. One of the key recommendations is to carry out a holistic and cumulative environment impact study of the hydroelectric power projects planned in Arunachal Pradesh with Assam in the downstream area.

Earlier, the petitioners represented by North East Affected Area Development Society (NEAADS), an Assam based non-profit, through a separate application sought that the Assam government should be impleaded as a respondent.

One of the recommendations cited by the petitioners said that Assam, a downstream state, is not a party to any of the processes of decision-making such as terms of allotment, preparation of detailed project report, terms of reference (ToR) for environmental clearance or the findings of the environment impact assessment (EIA). “Moreover, in the present scenario, there is no scope for Assam to raise query on the merits of a certain project on grounds of inadequate and inaccurate information on technical, environmental and social aspects,” observed the GoM.

With 163 hydroelectric projects identified in Arunachal Pradesh, GoM stressed the need for a cumulative impact assessment of these dams on the downstream areas in Assam. “GoM feels that considering the large number of hydro projects identified and MoUs signed by Arunachal Pradesh with various executing authorities, the overall cumulative downstream effect on the downstream areas of Assam needs to be studied before any of these projects are effectively taken up,” says the GoM

Further, NEAADS raised issues related to the impacts on riparian rights and wildlife in Assam. “Due to massive flow variations in the downstream areas during project operation, impacts on ecologically sensitive areas downstream, including the Dibru-Saikhowa National Park in Assam, impacts on winter agriculture and other livelihood such as fishing, driftwood collection and other related activities in the downstream (are implied),” the petitioners stated.

However, Justice Swatanter Kumar in the tribunal’s judgement stated that Assam could not be made a necessary party. “We see no reason to allow this application as prayed. It appears to us that state of Assam is neither a necessary nor a proper party for determining the issue in the matter before us. In the interest of justice, we permit the applicant to place on record a copy of the minutes of the meeting of the group of ministers from the state of Assam,” stated Kumar in the order.

On the other hand, dam developers Athena Demwe Power Limited, served a written reply opposing the government of Assam being made a respondent or a party. The government of Arunachal Pradesh and the Union Ministry of Environment and Forests (MoEF) have also verbally opposed making Assam government a party during arguments in the state. The dam developers have stated that inclusion of various parties is delaying the court proceedings and causing losses to the company.