Research in atmospheric sciences is booming because of the impending threat to4he world's climate. Every month there is a new study showing new sources of greenhouse gases - rages that are capable of producing global warming - or disputing earlier claims. Since almost all human activity produces greenhouse gases, new data is indicting industries ranging from nylon and aluminium to air travel. Meanwhile, studies by scientists show exaggerated claims being made in the West to blame developing countries. Science and politics are becoming a heady mix in the bid to allocate national responsibilities for global warming 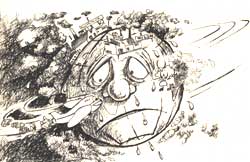 THE aluminium industry is responsible for spewing out two potent greenhouse gases - CFC-14 (tetrafluoromethane) and CFC-116 (hexafluoroethane). In terms of their global warming potential, they are over 8,000 times more effective than carbon dioxide, their atmospheric lifetime being over 10,000 years, according to Dean Abrahamson of the University of Minnesota, USA.

In 1989, the world aluminium industry consumed approximately 2.5 per cent to three per cent of the world's electricity and thus accouhted for about 0.7 per cent to 0.8 per cent of global carbon dioxide emissions. Once CFC-14 and 36 CFC-116 are taken into account, the K@Y 31 1992 DOWN TO EARTH aluminium industry can become a major source of the greenhouse emissions of a country. In New Zealand, for instance, aluminiurn smelting in 1987 emitted the equivalent of about 30 per cent of that country's total annual emissions from all fossil fuels.

Of the estimated 17.8 million tonnes (mt) of aluminium produced by the world's primary aluminium industry in 1990, 23 per cent was produced in USA. Other major producers are the Commonwealth of Independent States, Canada, Australia, Norway and Germany.

Energy efficiency and technological progress in production processes may reduce CFC-14 and CFC-116 emissions in the future. But industry spokespersons in the West point out, "It's worth noting that such improvements may be slow in coming to developing countries, where much of the new global smelting capacity is expected to be built over the next decade." Third World aluminiurn producers should, therefore, watch out.

INDIAN scientists, under the aegis of the Methane Campaign Network coordinated by the National Physical Laboratory in New Delhi, report that western studies have exaggerated Indian methane contribution to the atmosphere.

Though rice paddies and livestock do emit methane, these activities are essential for the survival of subsistence farmers in t .he. developing world. Methane emissioni from these sources have nonetEeless been publicised in the West as an important cause of global warming, based only on extrapolations of limited data collected in other countries.

A report brought out by the Council for Scientific and Industrial Research (CSIR), New Delhi - Greenhouse Gas Emissions in India: A Preliminary Report - points out that on an average, an Indian cow produces 22 kg of methane, not 35 kg per year as published by a western scientist, P J Crutzen.

Indian cattle are fed low energy diets, so their methane pr6duction is lower. The total methane produced by Indian livestock is estimated to be about seven million tonnes (mt) compared to earlier estimates of 10 mt.

India's share of global methane production from rice paddies has also been overestimated, according to A P Mitra, a former director general of the CSIR. The US Environmental Protection Agency (USEPA) held India responsible for an annual production of 37.8 mt of methane from rice paddies, but the CSIR study puts the figure at about 3.4 mt.

The USEPA had assumed that the Indian rice crop is submerged for 120 days, but Indian researchers feel that a 6046Y period is more realistic. They have found that the amount of methane produced depends on the soil type and the period over which rice roots stay submerged in stagnant water. Upland soils produce negligible methane emissions, whereas alkaline and saline soils produce considera6ly more methane per hour.

AIRCRAFT emissions may be responsible for more than 30 per cent of global warming, according to a recent study by Mark Barrett of Earth Resources Research, London. The study points out that while air transport causes a small proportion of atmospheric pollution, 20 per cent to 30 per cent of these emissions are injected into the atmosphere at high altitudes, where their effect is highly damaging.

Less than two per cent of the global anthropogenic nitrogen oxide (NOx) emissions are produced by aircraft, but because they are emitted at high altitudes, they are up to 50 times more destructive than surface level emissions.

The water vapour emitted by aircraft at high altitudes is not absorbed by the cold atmosphere above 9,000 metres. This vapour forms artificial ice crystal cirrus clouds which reflect down heat from the earth, though they allow sunlight to pass. This raises the temperature of the earth.

Some calculations show that a two per cent increase in such clouds can produce a 10 Celsius rise in the earth's temperature. Besides, aviation fuel consumption accounts for 2.7 per cent of global carbon dioxide emissions from all fossil fuel use.

The precise global warming effect of aircraft emissions is not clearly understood, says Barrett, because science cannot as yet quantify the pollutants' effects at high altitudes.

The Barrett report, released by the World Wide Fund for Nature, does not recommend the growth of air travel in developing countries. Says Barrett, "In the long term, the greatest potential for growth in air transport is likely to be in the less developed countries, where per capita air transport is very low." He suggests alternatives like railways for them. Obiously, flying is a luxury only the West can afford.

WHILE the main sources of nitrous oxide (N20) - a powerful greenhouse gas and a known contributor to stratospheric ozone destruction - are natural, among the anthropogenic sources has been pinpointed the manufacture of nylon-66 and nylon-612.

Mark Thiemens and William C Trogler of the University of California have recently published findings to show that the synthesis of adipic acid, a necessary precursor for nylon-66 and nylon-612 manufacture, yields 0.4 million tonfies of nitrogen per year.

Studies conducted by industry sources, however, put this at 0.6 million tonnes per year.

1@eing inert, nitrous oxide is freely released in unknown quantities. Although the absolute concentration of nitrous oxide is relatively low at about 300 parts per billion by volume, the gas has an atmospheric lifetime of over 130 years and is a very efficient greenhouse gas - more than 220 times as much as carbon dioxide on a per molecule basis.

There are few records available regarding the quantity of nitrous oxide produced, either naturally or anthropogenically. According to Thiemens and Trogler, about 30 per cent of the sources have not been identified.

In the absence of full information, burning of rain forests in tropical forests and the use of fertilisers have been blamed as major sources of nitrous oxide. But the new study shifts a major part of the blame away from developing countries to the industrialised, which account for over two-thirds of nylon-66 and nylon-612 production.