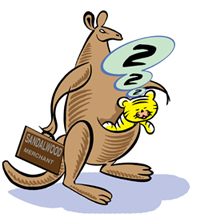 While Western Australia has set up plantations of Indian sandalwood in a big way, in its homeland, India, sandalwood production is on its last leg. The government's strict control and apathy towards sandalwood plantation in the country is well known. That and massive smuggling are said to have led to a decline in sandalwood production in the country.
Indian sandalwood (Santalum album) was once widespread in the southern peninsular region of India. But now 90 per cent of it comes from Karnataka and Tamil Nadu. Since 1792, when Tipu Sultan, the then ruler of Mysore, declared it a royal tree, Indian sandalwood has been under state government control. The state has been harvesting and marketing sandalwood exclusively but has not carried out any new plantations. In the absence of new trees and massive smuggling, sandalwood production in India has declined gradually. But there are other factors, too."Population pressure and deforestation have reduced the natural habitat of sandalwood," said S N Rai, former principal chief conservator of forests, Karnataka. The new saplings that spring up during monsoon are often destroyed in seasonal forest fires. Besides, saplings are also susceptible to grazing.

Its decline also affected local communities who were licensed by the government to harvest and transport sandalwood; sandalwood-based industries in the country have also been hit.
Taking advantage of India's laxity and increasing global demand for sandalwood, plantations outside India, especially in Australia, have flourished. This has threatened India's share in the international market and its local economy.

"India's supply is so low that it is now importing sandalwood from Australia to meet the demands of sandalwood-based industries in the country, especially for the production of sandalwood oil," said T S Rathore, scientist at the Institute of Wood Science and Technology in Bangalore. India contributes 90 per cent of the sandalwood oil production in the world.
Fearing losing its global sandalwood market, the Karnataka government made policy changes in 2001 to allow private players to grow sandalwood (see 'Lost in the woods', Down To Earth, October 15, 2001). Tamil Nadu followed suit in 2002.But these policies were seen with scepticism as the states still retained control over sandalwood extraction and trade. This ensured that big players didn't take much interest. Neither did it benefit small farmers as the trees take a long time to mature.

Meanwhile, Australia is promoting small-scale growers by ensuring high returns for their efforts and promoting genetically improved high-oil yeilding varieties. It also plans to harvest the sandalwood early. While India harvests sandalwood after 30 years, Australia plans to extract about 25 kg of heartwood in 14 years through improved propagation techniques.