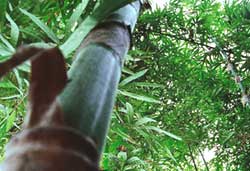 with an increasing thrust on the bamboo sector on which the livelihood of millions depends, there has been amplified interest in evolving better techniques for bamboo propagation and cheaper alternatives to expensive planting material.

Recently, K C Koshy and B Gopakumar of the Tropical Botanic Garden and Research Institute (tbgri), Kerala, reported a new method for vegetative propagation of self-incompatible bamboos -- which do not produce seeds and, therefore, are difficult to cultivate. The method has been evolved for golden bamboo (Bambusa vulgaris), one of the 20 species that the International Network for Bamboo and Rattan has identified for research and development, and Bambusa balcooa. " B balcooa is important in this scenario because it is a widely cultivated species which is also important to farmers," says K K Seethalakshmi, scientist-in-charge, plant physiology and propagation department, Kerala Forest Research Institute. The findings appear in the November 10 issue of Current Science (Vol 89, No 9).

To multiply non-seeding bamboo, several methods of vegetative propagation using offsets (lowest part of a bamboo with the rhizome root attached), culm (stem) and branch cuttings, layers, and tissue culture are currently adopted. However, these methods suffer from drawbacks such as bulky offsets, high cost of production (as in tissue culture) and limited scope for large-scale plantation. The tbgri method has improved upon existing techniques to develop saplings of a smaller size at a lower cost.

Koshy et al conducted numerous trials in both the offset and the cutting methods, using planting material (offsets and splits) from one generation and propagating them into the next. In the offset method, the scientists started off with just five bulky seedlings, but ended up with 114 saplings within a year and a half. Moreover, a gradual reduction in culm size was reached by reducing the size of containers. The scientists recommend pots of recycled polypropylene that are strong enough to withstand the pressure of emerging shoots.

In the second method of propagation, branch cuttings from 1-2-year-old culms were planted and replanted over six months. Being much quicker, this method yielded as many as 122 tillers (individual thin stems along with rhizome) from a mere 25 cuttings. The tbgri scientists improved this method of obtaining tillers and saplings from cuttings by introducing the mist technique, which uses a mist chamber to ensure 80-90 per cent relative humidity to speed up growth. tbgri has been distributing saplings to farmers since 1995, keeping some as stock plants for further multiplication. The casualty rate for the bamboo seedlings they distributed has only been 5-7 per cent. The culm production and growth rate are similar to other bamboo plantations.

The scientists calculated the production cost at each level of trial (see table:Cheap propagation). The high cost of seedlings in the initial trial was brought down drastically to Rs 4.61 per sapling by the fifth trial. If 70 per cent of saplings are sold at the rate of Rs 6 per sapling, the cost will come down to Rs 4.14 and Rs 3.32 by the fifth and sixth trials respectively. In subsequent trials, the cost of seedlings will be negligible but some other input costs will remain the same. However, in the cutting method the cost will be even lesser as saplings can be sold from the second trial onwards.

Koshy says the results indicate that this procedure can also be successfully applied to seed-producing bamboo such as Ochlandra spp. and Gigantochloa spp., during their non-seed bearing stages. "We hope that this method will give farmers enough material to cultivate these species and make them self-reliant in producing more planting material without the use of chemicals and hormones," he says.