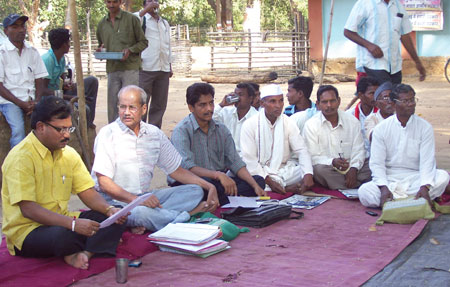 MENDHA Lekha village in Gadchiroli district of Maharashtra staged a novel protest on February 15. It organised a bamboo sale in the village to highlight the forest department’s refusal to grant transit passes to transport bamboo out of the village for sale.

Mendha Lekha was one of the first two villages in the country to claim community ownership over forests under the Forest Rights Act (FRA) of 2006. But even after claims were issued to the village on August 28, 2009, the department refused to issue passes to transport forest produce out of the village (see ‘Forest titles only on paper’, Down to Earth, May 31, 2010). Not having a pass means the produce would be confiscated at the forest check posts.

Gadchiroli MLA Namdev Usendi was the first client to buy bamboo from the protesters and called up the area’s conservator of forests P R Yeole requesting him to issue a transit pass for the bamboo pole he had bought. Many individuals and organisations, including Delhi non-profit Centre for Science and Environment, also purchased bamboo and submitted applications for passes.

Forest rights activist and leader of Mendha Lekha, Devaji Tofa, said the gram sabha had informed the department about the intended protest sale in January. Forest department officials, who had been ignoring the requests for passes for a year, responded by saying harvesting and marketing bamboo is not included in the rights of gram sabhas.

It invited the village residents to participate in department-sponsored bamboo felling and accept wages for it, which was the practice before FRA came into effect. In its reply, the gram sabha cited various sections of FRA which grant communities ownership over bamboo and other minor forest produce and said it would go ahead with the protest.

A day before the symbolic protest, an adult member from each of the 83 families in the village felled 83 bamboo poles in coupe number 471 within the village forest limits, due for felling this year. “Forest officials were shooting our bamboo felling activity on camera,” said a resident. A sale was organised next afternoon; each pole was priced at Rs 25.

When Usendi called up Yeole to request for passes, the conservator of forests refused, saying the Maharashtra government was yet to take a decision on implementing FRA. Usendi countered by saying the timeframe for an independent state forest rights legislation has lapsed and that the Central law is now in force in the state. He said he would move the consumer court and initiate an insubordination motion in the coming Assembly session.

Hirabai Hiralal of Vrikshamitra, a non-profit supporting Mendha Lekha in its fight for forest rights, said the department has still not issued passes.

The swaraj dream
Two tribal villages get 2,349 hectares
Give us 18 sq km
How government is subverting forest right act