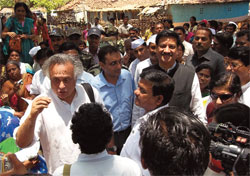 THE success story of Mendha Lekha achieving record earnings on the sale of bamboo ends just there.

News reports went to the extent of calling this village in Maharashtra’s Gadchiroli district crorepati. But six months after the then environment minister Jairam Ramesh announced the liberation of bamboo, villages which have received community forest rights (CFR) are still unable to access bamboo that is theirs by right.

The forest department has not yet given gram sabhas the transit pass books that give owners the power to sell and transport bamboo. Hopes were raised when the gram sabha in Mendha Lekha was given the pass book. People in other villages believed the passes would become freely available to them as well. But this did not happen.

Marda, which had received its CFR documents along with Mendha Lekha, applied for transit pass book about two months ago but the department did not respond.

“Marda had applied for it last year as well but the request was ignored,” says Subodh Kulkarni, an independent researcher. “This year, the gram sabha followed up the request and met the divisional forest officer. But the department still did not act,” he says.

“The gram sabha has already entered into a contract with a private contractor to sell its bamboo at Rs 33 per long bamboo pole for an estimated 150,000 to 200,000 bamboo poles. This is the rate that Mendha Lekha gets,” says Nitin Barsinge of the non-profit Vedha, which is helping Marda claim its rights over bamboo. “Bamboo felling season begins in November.

Preparatory work will start soon. Villagers are now getting edgy over the department’s silence,” he adds.

When contacted, M Karunakaran, chief conservator of forests of Gadchiroli, pleaded ignorance about the application for the book of transit passes by Marda village, but assured that it would be issued soon.

The gram sabha, on its part, has decided that if the passes are not issued in time, it will protest by felling 10,000 to 15,000 bamboos just the way people of Mendha Lekha did last year. “Villages that have got CFR rights want to market their bamboo just like Mendha Lekha does. There is large-scale discontent over the bottlenecks imposed by the department,” says Kulkarni (see ‘Forest department’s cheat act’, Down To Earth, August 1-15, 2011).

People are also apprehensive about the way transit passes will be issued. “Mendha Lekha was given passes that the department issues to contractors. They were made to pay what was paid by contractors,” says Vishu Sainuji Potawi, president of the forest rights committee (FRC) in Marda. “We do not want to be treated like contractors. We want the passes that the department uses for its own felling. We want them as our right, free of cost,” he says.

People have also expressed discontent over dependence on the department for transit passes. “It will be a constant hassle to ask the forest department for the pass each time we need it,” says Roopchand Dakhne, president of the forest rights committee in Ghati village. “The department will do everything it can to slow us down,” he alleges.

“Paying for the passes every year will compromise the autonomy of the gram sabha and be against the spirit of the Forest Rights Act (FRA),” says Mohan Hirabai Hiralal of the non-profit Vrikshamitra.

As an alternative way of marketing forest produce, Mendha Lekha gram sabha is considering printing its own transit passes. The department’s first reaction to this is negative. “It is illegal,” says Karunakaran. But gram sabhas and non-profits disagree.

“The FRA grants management and ownership rights over minor forest produce to gram sabhas,” says Hiralal. “This automatically gives them the right to work out the procedures. If the department does not want this to happen, it should suggest an alternative that works for gram sabhas,” he adds.