Environmental footprint of beef is bigger than poultry or dairy 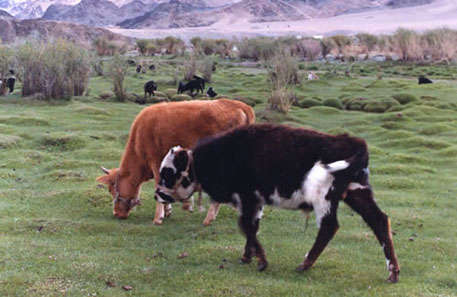 Citing new research published by the Proceedings of the National Academy of Sciences  (PNAS), the report says that cattle release five times more greenhouse gases and consume six times more nitrogen than poultry. The research authors claim their paper is the first study to quantify the scale in a comparative way.

The researchers divided livestock into five categories—beef, pork, poultry, dairy and eggs. They developed a uniform methodology to measure the comparative impact in terms of land and water use, reactive nitrogen discharge and greenhouse gas emissions. The scientists used data from 2000-2010 from the US department of agriculture to calculate the amount of resources required for all the feed consumed by edible livestock. Beef emerged as the animal with the biggest environmental impact. The overall environmental footprint of beef is particularly large because it combines a low-production efficiency with very high volume, Mark Sutton, one of the researchers, told BBC.

Lead author of the study, Gidon Eshel, believes eliminating beef and replacing it with relatively efficient animal-based alternatives such as eggs can achieve an environmental improvement comparable to switching to plant food source.

Researchers say the conclusions of the study are applicable in Europe, although the work is based on US data. “Over 60 per cent of the environmental burden of livestock in the US results from beef. Although the exact numbers will be different for Europe, the overall message is similar: cattle dominate the livestock footprint of both Europe and US,” says Sutton.

The PNAS study says livestock production impacts air and water quality, ocean health and greenhouse gas emissions on regional to global scales and sees the quantification of environmental impacts of various livestock categories as a big challenge of sustainability science.

Another research published in the journal Climatic Change  finds that livestock emissions are on the rise. The researchers, including Dario Caro, formerly with the Carnegie Institution for Science, and Carnegie’s Ken Caldeira, estimated greenhouse gas emissions related to livestock in 237 countries during 1961-2010. They found that methane and nitrous oxide emissions from livestock in 2010 contributed to 9 per cent of all greenhouse gases. They say these emissions increased by 51 per cent over the analysed period.

The research echoes the PNAS study in citing beef as the biggest contributor to greenhouse gas emissions.  According to its data, beef and dairy cattle comprise 74 per cent of livestock-related greenhouse gas emissions, with 54 per cent coming from beef cattle alone. Part of this is due to the abundance of cows, but mostly because cattle emit greater quantities of methane and nitrous oxide than other animals.

“That tasty hamburger is the real culprit,” Caldeira said. “It might be better for the environment if we all became vegetarians, but a lot of improvement could come from eating pork or chicken instead of beef.”