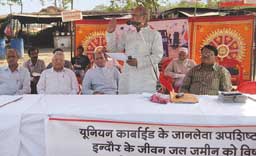 People in Indore and the adjoining Pithampur industrial area in Madhya Pradesh are protesting the incineration of Bhopal’s toxic waste near their homes. The waste disposal facility in Pithampur in Dhar district was completed recently.

Earlier in February 2010, the Supreme Court had directed that the disposal facility should be strengthened. It is meant to incinerate 346 tonne waste lying at the Union Carbide factory, the source of the 1984 gas leak.


Villagers have started complaining. Some of the Union Carbide waste (37 tonnes) lying in the Pithampur facility has contaminated the groundwater, they said. “Residents of villages like Tarpura complained their crops did not give expected yield this year due to deterioration in water quality,” said Gautam Kothari, president of Pithampur Audhyogik Sangathan. The incinerator is next to Tarpura. Kothari said when people sought waste samples from the Madhya Pradesh Gas Relief and Rehabilitation Department, officials refused saying it is hazardous.

A civil society group of Indore, Lok Maitri, has started a signature campaign. Its volunteers obtained signatures of people in Indore, Pithampur and surrounding villages against incinerating toxic waste in the area. A Lok Maitri member and former vice chancellor of Devi Ahilya University in Indore, Bharat Chapparwal, said Ramky has not maintained the minimum 500 metre distance from Tarpura as directed by the court. The company also failed to install a multi-effect evaporator to curb emissions, he said.

General manager of the Ramky waste disposal facility, Amit Chaudhary, said the Central Pollution Control Board has exempted his company from installing multi-effect evaporator. He said it was not necessary to keep 500 metre distance from Tarpura as the chimney would be 35 metre high and the fumes will rise high. He said the company is awaiting a couple of clearances to start operations.

Tarpura villagers took to the streets on March 13 when news spread that the entire village would be evacuated once the incinerator starts functioning. Former head of the Pithampur municipal council, Mangibai Kesaria, a resident of Tarpura, demanded the incinerator should be shifted half-a-kilometre as specified under the safety criteria of the Central Pollution Control Board.