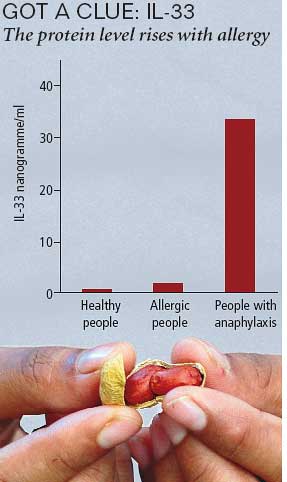 It might be possible to cure allergy, not just suppress it

researchers are nowadays taking a different approach to treating allergies. They are focusing on the interplay between the body's immunity and the development of an allergy. A drug can at the most suppress allergy every time it happens but delving deeper into what causes it might help get rid of the affliction forever.

An allergy is caused when the body reacts to a foreign substance. Although this is usually not more than coughs, rashes or fever, there are times it can get out of control. This leads to an anaphylactic shock, characterized by a sudden dip in blood pressure and acute difficulty in breathing. Commonly used things like peanuts and penicillin can trigger the reaction. Scientists have traced anaphylactic shock to a protein called interleukin-33 (IL-33).

Earlier studies have found IL-33 to regulate immunity by increasing the levels of antibodies. Peter Pushparaj, at the division of immunology, infection and inflammation, University of Glasgow, Scotland, and other researchers took tissue samples of patients suffering from anaphylactic shock and of healthy people. They found very high levels of IL-33 in skin samples of people with allergy-induced rashes; the protein was absent in healthy skin.

The authors say they still can't say whether the allergy-induced shock stimulates IL-33 production, or IL-33 itself causes the allergic reaction which leads to the shock.

The study was published in the June 16 issue of the Proceedings of the National Academy of Sciences.

"Now that we know the role of IL-33, we can block either its production, or its receptors," said Narinder Kumar Mehra, head of the department of transplant immunology and immunogenetics, All India Institute of Medical Sciences, Delhi. "Researching into how a disease develops because of the body's immune system will make it easier to target a drug, and treat anaphylactic shock."