clean energy
Nuclear deal gets through

With the International Atomic Energy Agency clearing India's nuclear safeguards agreement, the country has overcome the first international hurdle for the nuclear deal. Later in August India needs an unprecedented waiver from the nuclear suppliers group (nsg) to begin nuclear commerce. nsg works by consensus so all members have to be on board. It will not be easy. Countries like Ireland, Austria, Switzerland, New Zealand think rewarding India will send the wrong message on non proliferation considering China's final position is also uncertain.

India is worried that these countries may try to impose conditions for waiving the rules for India, something New Delhi is clear it won't accept. "The point is India is not a non-nuclear weapon state.nsg guidelines are essentially meant for non-nuclear weapons states." says Anil Kakodkar, Chairman, Atomic Energy Commission. 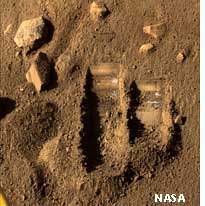 On July 31, nasa's Phoenix Mars Lander identified water in a soil sample from Mars. The craft obtained water by heating an icy soil sample in its "bake and sniff" oven.

"We've seen evidence for this water ice before in observations by the Mars Odyssey orbiter and in disappearing chunks observed by Phoenix last month but this is the first time Martian water has been touched and tasted," said William Boynton of the University of Arizona, lead scientist for the Thermal and Evolved-Gas Analyzer.

The successful sampling completes one of the Phoenix mission's core objectives--confirming that water ice does indeed exist near the Martian north pole. Now the mission has been extended through September 30 to allow the Lander to analyze that water ice and soil for signs of organic materials and for conditions suitable for life, nasa said.

Field trials of genetically modified (gm) crops should be done within a national high-security facility or in fields at secret locations to prevent them from being attacked and destroyed by anti- gm activists, said scientists from the Leeds University, the uk, after protesters trampled crops at their gm trial field near Tadcaster, North Yorkshire.

It was one of the only two trials on gm crops being conducted in the uk this year. "Such repeated attacks on field trials are stifling our research to evaluate gm crops...It is too expensive to conduct gm crop trials in the uk under the current regulations that require the exact location of each trial to be made public," they said. Scientists have called on the government to allow the location of small scale trials to be kept secret or to establish a high security facility.

Critics insist that gm crops could be harmful to the environment and almost all of the 54 gm trials conducted in the uk since 2000 have been targeted by protesters because of these fears.

The committee is headed by Rajendra K Pachauri, director-general of the Tata Energy Research Institute. While debating the Rs 2,600-crore project, Chief Justice K G Balakrishnan had suggested that the Centre should consider the Alignment-4 with a little deviation from the Dhanuskodi point to avoid the Rama Sethu, since petitioner are objecting to its demolition.

Earlier, Alignment-4 was given up as it would have cut through the Rameswaram island. The project is now being implemented via Alignment-6, which will cut across Rama Sethu. 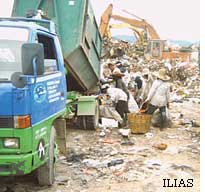 In a bid to reduce river pollution, the Malaysian government said that it will take over the management of the country's 260 landfills.

"As per the current practice, the councils dump all collected rubbish at landfills without separating them," said Housing and Local Government Minister Datuk Seri Ong Ka Chuan. "This results in leachate that pollutes nearby rivers." By taking over the landfills, the ministry would bring in experts to treat the leachate from the landfills before discharging it into rivers, said Ong. The government also plans to take over the solid waste disposal in September.

A land conflict between rice farmers whose fields are deep in the Amazon jungle and a group of indigenous people has turned so violent that the Brazilian supreme court warns it could escalate to a civil war.

The court said this while hearing an argument that whether the government should evict rice farmers from a 1.7 million hectare of indigenous forestland decreed by President Lula da Silva in 2005. The evictions were stopped in April this year after rice farmers started burning bridges and blockading roads.

The court's decision is also expected to determine the future of the Amazon by redefining Brazil's policy toward its indigenous people. Brazil's 1988 constitution says that all Indian ancestral lands must be demarcated and turned over to tribes within five years. While that process is yet to be completed, indigenous people dwell in about 11 per cent of Brazilian territory and 22 per cent of the Amazon.

The 130-member Ecuadorian Constitutional Assembly, while rewriting the country's constitution, has voted to approve articles that recognize rights for nature and ecosystems.

Every person or community will be able to demand the recognitions of rights for nature.

In the cases of severe or permanent environmental impact, including the ones caused by the exploitation on non renewable natural resources, the State will establish the most efficient mechanisms for the restoration, and will adopt the adequate measures to eliminate or mitigate the harmful environmental consequences.

The State will motivate juridical persons as well as collectives to protect nature; it will promote respect towards all the elements that form an ecosystem. 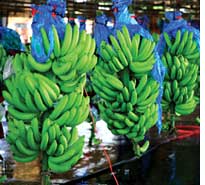 The State will apply precaution and restriction measures in all the activities that can lead to the extinction of species, the destruction of the ecosystems or permanent alteration of natural cycles.

The draft constitution is now open for a countrywide vote.

A deal to settle a historic row over trade in bananas between Latin American exporters and the eu is off after the wto talks failed on July 29.

Just two days back, 11 Latin American countries agreed to end the conflict after eu said it would reduce import tariff from 176 ( us $277) per tonne annually to 114 ( us $171) per tonne by 2016. The cut had angered rival exporters from the African, Caribbean and Pacific nations, whose bananas enter the eu with no duties. They had threatened to block the deal saying the 35 per cent cut will potentially harm their countries. Ecuador, the world's top banana exporter, demanded that the eu stick to the agreement to slash its import tariffs on bananas.

In response to recent recalls of several consumer products, including toys, the us is set to partially ban a group of chemicals used to soften plastic toys. The chemicals, known as phthalates, are found in hundreds of household items, including soft plastic toys and other baby products.

Studies have found that exposure to the chemical may cause long-term health effects, including cancer and possible reproductive disorders. Several countries including the eu have already moved to ban or restrict phthalates.

In the us, the ban is part of a consumer product safety reform bill, which the Senate passed recently. As of now, the move will ban only three phthalates that are widely used in toys and childcare products. The other three will be banned after 18 months of review by the Consumer Product Safety Commission.

However, even before the move by the federal government, the state governments of California, Washington and Vermont have already passed legislation to limit all six phthalates. Several other states are considering the restriction.

A Kenyan court recently halted a us $370-million sugar and biofuels project in a coastal wetland and ordered a judicial review after conservation groups warned that the project would threaten wildlife and local livelihoods.

The project, a joint initiative by the government and the country's biggest sugar miller, Mumias, aims to plant sugarcane plants on over 20,000 hectares in the Tana river delta. The government says the project will create jobs and meet an annual deficit of 200,000 tonnes of sugar. Conservationists say the project threatens 350 species of birds, lions, elephants, rare sharks and reptiles.