Bring back the state 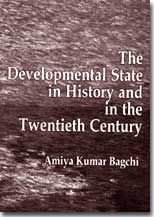 For many economists and policy-makers, the idea of a developmental state seems passe . Not so for Amiya Bagchi. This eminent economist has come up with a collection of essays that shows that the concept still has relevance. And what better way to do that than turn to history. The book under review charts the rise of developed economies in Europe, North America and Japan. Bagchi argues that in each case, the state played a significant role in providing improved living standards for its citizens.

The author traces the developmental state to the Dutch city republics of the 16th century. In this, he differs with those social scientists who argue that such states were products of post World War ii Keynesian economics. According to Bagchi, not only were the Dutch republicans willing to sacrifice their rulers when the need arose, the rulers themselves did not hesitate to tax themselves and the Burghers -- an influential gentry -- in times of wars and famines. Providing employment to all was an important agenda for the Dutch republics during their half-a-century career as developmental states.

The book also analyses the early British developmental state. Unlike its Dutch counterparts, the early British developmental state had a fairly long stint: almost 300 years. Bagchi argues that this state played a key role in the development of Britain as an industrial power. The British consciously followed the Dutch example. The state-owned Bank of England -- set up in 1694 -- was modelled on the Bank of Amsterdam. Moreover, the British state emulated its Dutch counterpart by taxing big landowners -- it's another matter, however, that the landed gentry managed to pass on the taxes to their tenants. In spite of this, the British government succeeded in appropriating almost 20 per cent of the nation's output as taxes in the 1760s -- a figure much higher than that of contemporary France.

Britain also had a decentralised system of poor relief since the time of Elizabeth I. The Elizabathean poor laws were codified in 1597 and were re-enacted in 1601. The parish was the basic unit of administering these laws, a compulsory poor rate was levied on rich households and there were various types of relief for the needy -- apprenticeships for children, work for the able-bodied and alms and alms houses for the aged and the infirm. Of course, a corollary of all this was rigorous punishment for the able-bodied beggars.

Closer to our times, Kemal Ataturk's Turkey -- in the second and third decades of the 20th century -- and Brazil in the 1930s are held up as examples of the developmental state. Bagchi also studies the erstwhile Soviet model.

But why did the concept go out of vogue? The author argues that in most cases, this was because developmental activities were top-down processes. In Brazil, these activities were not accompanied by serious attempts at land reforms. India did have some land reforms, but they were restricted to a few states -- most of the countryside is still dominated by landlords. Education has not reached most people. In such a situation, argues Bagchi, democracy became a mechanism for arriving at compromises among the upper classes.

T he author advances the idea of a decentralised developmental democracy as a solution. Basic needs such as those pertaining to nutrition, education -- up to a certain level -- and medical care are to be provided by decentralised state apparatuses. Bagchi points out that the 73rd and the 74th amendments to the Indian Constitution do provide an apt legal frame-work for decentralised democracy. But the current neo-liberal policies bedevil these measures. Bagchi argues that though the Constitution empowers local bodies with decision making powers, neo-liberal policies severely constrict the resources these bodies can actually control. Bagchi again goes back to contemporary history and argues that constitutional amendments were also accompanied by "artificially engineered financial crisis".

The concept of developmental democracy appears a bit sketchy. The author does note that it should include positive and negative freedoms. But he does not elaborate on these concepts. And what would be the role of the market in the schema? We await a more comprehensive monograph for answers.