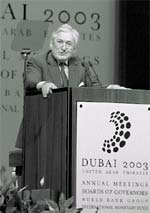 THE tone and tenor of the failed Fifth World Trade Organization (WTO) Ministerial Conference in Cancun found an echo in the annual meetings of the World Bank (WB) and International Monetary Fund (IMF) in Dubai from September 20 to 22. The developing countries reiterated their demand that the industrialised world should get rid of trade distorting agricultural subsidies, which are currently in excess of us $300 billion per year.

Brazil's finance minister, Antonio Palocci, said the protectionist practices of the industrialised countries "appear as intolerable hypocrisy to poor citizens of the developing world". wb president James Wolfensohn gave out a call to "rebalance our world", in what was widely described as the most powerful speech since he took over in 1995. "At Cancun, developing countries signalled their determination to push for a new equilibrium," he stated.

This bloc's plea for greater participation in the wb's decision-making process rose to a crescendo during the meets. The developing committee of the wb and imf saw a bitter battle over three issues:

• The shareholding pattern of member countries in the institutions

• The need for greater representation from Africa

• The us-European domination of the top jobs in the wb and imf (for six decades now, the bank's president has always been from the us and the imf's managing director has come from Europe).

As an agreement seemed out of sight, decisions on these matters were postponed until the next annual meetings.

The dramatic protests that have come to mark such international occasions were conspicuous by their absence. There were two reasons for this: one, the activist groups were not able to regroup after their show of strength in Cancun. And, two, unprecedented security arrangements made by the Dubai authorities acted as a deterrent. This was the first time that the annual meetings were held in the Arab world, and Dubai was determined to keep them trouble-free.

Non-governmental organisations were assigned a corner within the convention centre. Three bodies -- the International Rivers Network (IRN), Environmental Defense and Friends of the Earth -- released a report highlighting the wb's renewed interest in large dams and the extractive industry. Entitled 'Gambling with People's Lives', it documents the social and environmental impact of large dams, and criticises the bank's February 2003 water resources sector strategy.

It may be noted that the wb had withdrawn from financing large dams in the mid-1990s in the wake of several public relations disasters such as the one pertaining to the Sardar Sarovar Project on Narmada river in India. Peter Bosshard of irn cautions that the bank has begun flouting its own norms and reviews under pressure from governments to lend for large projects. While his worry is that this attitude will result in governments planning more mega projects, a top wb economist points out that developing countries, particularly China and India, are responsible for the change in the bank's strategy.

David Grey, the bank's senior water adviser, asserts that the wb has learnt a lot from its past mistakes and is concerned about water storage, not large dams: "Developing countries are heavily dependent on rainfall. Water availability has a major impact on the gross domestic product. While Ethiopia has a water storage of 40 cubic metres per capita, the figure for the us is 6,500 and that for Australia is over 4,000." He says that large dams comprise only one per cent of the bank's allocation to the water sector.