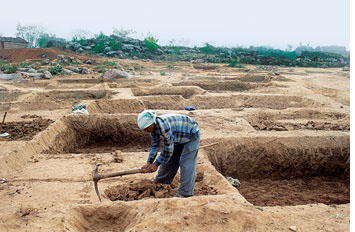 the Backward Region Grant Fund--a centre-funded scheme to be directly implemented by panchayati raj institutions--launched in February this year, has hardly made progress. The scheme, meant to address regional imbalances in development, was considered "the single biggest instrument for effecting participatory planning at the local level" by Prime Minister Manmohan Singh. Eight months down the line, only 53 of the 250 districts chosen have submitted their district plans and 31 districts have got the plans approved.

Under the scheme, it is mandatory for a state to form a district planning committee which will consolidate an exhaustive district plan submitted by gram panchayats and block panchayats, rather than separate district plans for all major central schemes (see box: Little development ). ngos say the failure is because panchayats have not been given enough powers.

"Twenty-two districts have not got approval because they have not submitted consolidated plans comprising information on natural and financial resources available in their districts. We have asked them to redraft the plans," said an official of the Union Ministry of Panchayati Raj ( mopr ). Bihar, with 36 districts under the scheme, has not got even a single plan approved. Maharashtra, Uttarakhand, Uttar Pradesh, Gujarat and Punjab have not even constituted the mandatory district planning committees.

m o pr has been given Rs 3,750 crore--a one-time fund--to be disbursed in 250 backward districts. The allocation is divided into two components, capacity building fund of Rs 250 crore (Rs 1 crore for each district) and a development grant of Rs 3,500 crore. The total allocation had been pegged at Rs 1,925 crore in the current fiscal. So far, 22 states have got Rs 222 crore.

Considering the low disbursal, the ministry has relaxed norms to expedite progress. It has allowed states to get money for activities such as building a panchayat ghar s, angaanwadi s, schools and recruitment of staff at the gram panchayats without the mandatory formulation of a plan. The relaxation is just for the current fiscal. "We expect the districts to formulate at least an annual plan and then they can take up preparation of an exhaustive plan for the next five years," says a ministry official.

ngos argue that in the absence of proper devolution of funds, functions and functionaries to the panchayati raj institutions in states, panchayats are not in a position to conduct a comprehensive planning exercise. "Given a state's reluctance to transfer funds to the panchayati raj institutions, their abilities are restricted," says Sachin Baghel, deputy chairperson, Zilla Parishad, Rajnandgaon district of Chhattisgarh. "Even if gram panchayats prepare village plans, block panchayats do not have the capacity to consolidate village plans," says Manor Rai, programme director, Society for Participatory Research in Asia, a Delhi-based ngo