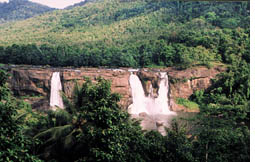 the Kerala State Electricity Board is hopeful that the Athirapally Hydro Electric Project in the state's Trissur district will be revived. The Union ministry of Environment and Forests on July 19 cleared the board's proposal to build a 163-mw dam on the Chalakudy river. The clearance has sparked protests from environmentalists and scientists, who say the ministry has sounded the death knell to a one-of its-kind riparian ecosystem in Kerala. They also fear it will affect 138.6 ha of forestland, dry up the Athirapally waterfall and affect tribal families living in the area. There has been a long-standing debate over the project's feasibility (see See saw...).

But the Left front government in the state has no plans of reconsidering the project."There are a few anti-dam protestors but we have made up our minds to go ahead with the project," says P R Rajan, cpi (m) Rajya Sabha mp.
The centre gave the clearance after it got recommendations from its expert committee on River Valley Projects, which visited the site in April 2007

and heard public responses to the project. The clearance comes with a set of conditions that include welfare measures for tribal families in the area, plugging of irrigation channels from the river, maintaining a minimum flow of water over the Athirapally waterfall, anti-poaching measures, and setting up of a monitoring committee and facility to oversee ecological changes that may arise due to setting up of the dam.

The clearance also limits the period for power generation to four hours (7pm to 11pm) from February 1 to May 31 every year, the driest months. This provision, according to the ministry, will take care of tourism concerns during the lean season. It has also said in the clearance note that the state electricity board should sacrifice power generation if warranted, by giving priority to maintenance of 7.65 cubic metre per second (cumec) of water over the Athirapally fall.
The Rs 675-crore project is planned 35 km east of Chalakudy town, along the Chalakudy-Anamalai inter-state highway in Vazhachal forest division of Trissur. According to official estimates, the dam is envisaged to be 23 m high and 311 m wide. The dam is being projected as a peak load station where water will be diverted via penstock (pipe) to turbines downstream. A dam toe power house is also proposed downstream of the dam to maintain the Athirapally and Vazhachal waterfalls.

But residents and anti-dam activists are not ready to buy any of the recommendations yet. C G Madusudhanan, a civil engineer researching the hydrology of Chalakudy river, says the Union ministry has ignored problems of the people who depend on the river for drinking water, irrigation and sustenance from tourism. "The Athirapally waterfall looks the best in July when the river experiences the maximum flow of water (102 cumec approximately). In the dryer months like March and April, the flow comes down to around 14-15 cumec. There will be no waterfall left if the water flow is reduced to 7.65 cumec," he said.

Besides, the power generators will be connected through a 7-km-long penstock, which will channel almost 86 per cent of the river's water from the dam. "Although the electricity board maintains that villagers living up to seven km downstream have alternative streams for water, the truth is there are no alternatives," says Madusudhanan. 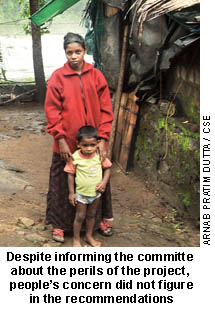 Another worrying factor, he says, is that the project being a peak-load station, the Chalakudy river will experience heavy fluctuations of water flow. The dam will function for four to five hours in the evening. When power is not being generated the flow will be below 10 cumec. But for the four to five hours when power is generated the release can be as high as 130 cumec. This may result in overflowing and will pose problems for irrigation projects downstream, including the Chalakudy River Diversion Scheme, which irrigates and provides drinking water to at least 22 gram panchayats in Trissur and Ernakulam districts.


It is alleged that two settlements of the Kadar tribe comprising around 80 families will be the worst affected. "Ward no 6 of Athirapally panchayat has about 21 Kadar families living in less than 400 m from the proposed dam site and yet the ministry claims that the families will not be affected. We informed the committee of the perils but they do not show in the recommendations," says V K Geetha, a Kadar schoolteacher and a member of the Athirapally village panchayat.

A Latha, research coordinator of Chalakudy-based River Research Centre, says the problems threatening the area's ecology cannot be summed up in a few pages by suggesting some mitigation measures. "The recommendations of the expert committee are flawed," she says, adding that a stretch of 28.5 hectares of riparian forest falls under the submergence area.

"The Vazhachal stretch of the Chalakudy river has the highest fish density and diversity in the state. The project area also falls under the habitat of the rarest and highly endangered Cochin Forest Cane turtle (Heosemys silvatica). The National Bureau of Fish Genetic Resources in Lucknow has recommended this stretch as a fish sanctuary," she adds.

V S Vijayan, chairperson of Kerala Biodiversity Board, agrees "The Vazhachal forest division is the second most biodiverse area in the state. The International Bird Association has declared it an 'Important Bird Area' and the Asian Nature Conservation Foundation has recommended that the area should be declared a sanctuary or a national park. The Wildlife Trust of India, too, has named it one of India's best elephant conservation efforts. Any disruption to this fragile ecosystem will spell disaster."

Amita Bachchan, research consultant with the state forest department, says the area is the only nesting site of the endangered Malabar Pied Hornbill. "Three of the four species of the hornbill nesting sites fall within the submergence area of the dam," he said.