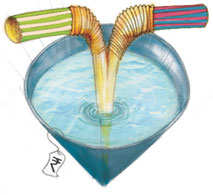 THE Union Ministry of Water Resources recently uploaded the draft of National Water Policy, 2012, on its website, inviting comments from the public. The draft underlines the need to treat water as “economic good”, but deliberately misses a crucial point: prioritising competing users of water, thus providing flexibility for allocating water for industrial use even at the cost of agriculture. The approach, says the ministry, is to steer clear of water allocation priorities because they lead to conflict. The Centre had adopted a water policy a decade ago which states that drinking be accorded the highest priority followed by irrigation, hydro-power, ecology, industrial requirement, and navigation and other uses.

G Mohan Kumar, additional secretary of the water resources ministry, says, “We have done away with priorities since it was creating confusion.” Agriculture may become irrelevant where industrialisation is taking place on a large scale, he adds. However there is no answer on what the confusion is.

The draft, uploaded on January 31, states, “After meeting the minimum quantity of water required for survival of human beings and ecosystem, water must be used as an economic good with higher priority towards basic livelihood support to the poor and ensuring food security.” Kumar says, “It is implicit that irrigation be given priority over industry.” When asked why this is not stated explicitly, he replied: “We don’t want to keep it rigid.”

Industry associations, who lobbied for the draft, have welcomed it. “Improving water efficiency across all sectors is crucial for reducing dependence on freshwater sources,” says Romit Sen, senior assistant director, Federation of Indian Chambers of Commerce and Industry (FICCI). Water should be priced properly to reduce its overuse. Pricing of water for various uses has received considerable attention in the draft policy, he adds. The draft maintains that water for drinking should have priority over other uses.

The 2002 policy deviated from the first national water policy in 1987 and encouraged private sector participation in planning, development and management of water resources (see box).

Due to opposition to the possibility of the private sector owning water assets, this has been dropped in the draft. Instead, impetus has been given to the public private partnership (PPP) model. The draft mentions the “service provider” role of the state has to be gradually reduced and shifted to regulation and control of services. As per the draft, water-related services should be transferred to community and/or private sector with appropriate PPP model under the general superintendence of the state. “The draft fails to recognise that we cannot simply assert a number of propositions without considering their inter-relationships (and possible contradictions),” says Ramaswamy Iyer, principle draftsman of the 1987 policy. “Can we simultaneously advocate community participation, public trust doctrine and PPP without thinking about the inter-relationships?” asks Iyer.

The draft upholds the ecological needs of a river, stating that water be set aside in proportion to a river’s natural flow regime. “The draft is a slight improvement on the 2002 policy, but it is no more than slight,” says Iyer.

The issue is not about the objectives of the policy, but of instruments to translate the policies (intentions) into actions on ground, says Dinesh Kumar, executive director of Institute for Resource Analysis and Policy in Hyderabad. These include creation of river basin organisations, regulatory bodies and establishment of a legal framework to realise the objectives. The draft does not seem to offer anything significantly different from what the old one suggested, only the wordings are different, says Kumar.

The ministry says the 2012 policy will set new guidelines for states to adopt. “It is left to the states to use these guidelines,” says Kumar. The earlier policy also stated that success of the endeavour will depend on a commitment to achieve the objectives and adoption of state water policies backed by an operational action plan. In the past decade only 11 states drafted their own policy.

The draft National Water Policy, 2012 shall remain open for comments till February 29.