Global warming has resulted in 20 per cent increase in price of wheat, maize, rice and soybean 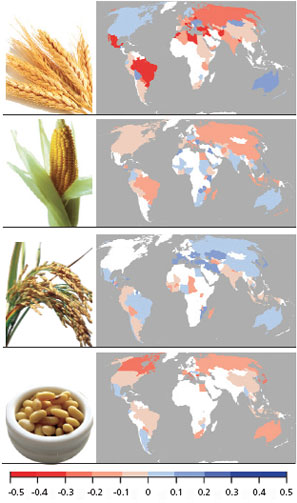 THERE have been many indicators that global warming could be hurting the world food production, lowering yields and increasing prices. Turns out the warming of the planet over the past three decades has already led to a measurable reduction in crop production of wheat and maize.

Researchers from Stanford University studied global production of four major crops, maize, wheat, rice and soybean. They found the production of maize and wheat declined by 3.8 per cent and 5.5 per cent, respectively. However, the effect on rice and soybean was insignificant with gains and losses in different countries balancing each other. Understanding the impacts of past trends can help gauge the importance of near-term climate change for supply of key food commodities, says lead researcher David B Lobell, department of environmental earth system science, Stanford University in the US.

For the study the researchers analysed available data on weather patterns and crop production from 1980 to 2008. The study, published in Science Express in May 5, reported a few country-specific losses. For instance, wheat production declined in Russia by 15 per cent as well as in Turkey and Mexico. Maize production reduced in China. Such changes in production were not observed in the US. It is yet to see the warming experienced by other countries, claim the researchers.

The Intergovernmental Panel on Climate Change (IPCC) in its 2007 report had declared an increase in global average temperature by 0.18°C. The study says the warming effects on production have led to about 20 per cent increase in global market prices of the four crops. “At current market prices and global production levels, this translates to about an additional US $50 billion per year spent on food,” the study states.

Indian scientists are divided on whether climate change will affect crop yield. According to Shafiq A Wani, director research of Sher-e-Kashmir University of Agricultural Sciences & Technology in Kashmir, shortage of agricultural produce directly affects markets. But R S Deshpande, director of Institute for Social and Economic Change in Bengaluru, says the decline in wheat and maize production is not big as production levels differs year to year “and should not be ascribed to one variable”. However, he adds, “it does not mean we need to be complacent about climate change”. The study says that rice production declined in some countries but at a global level the drop is small.

“Rice production has been affected,” says V Geethalakshmi, head of the centre. According to the study’s climate projections, Tamil Nadu can experience an increase of 1.5°C towards the middle of this century. This may further increase by 2°C towards the end of the century. The rise could be mainly observed in rice-growing Cauvery delta regions. “If appropriate adaptive cultivation is not undertaken rice yield would decrease by 15 to 20 per cent by the end of the century,” Geethalakshmi warns.