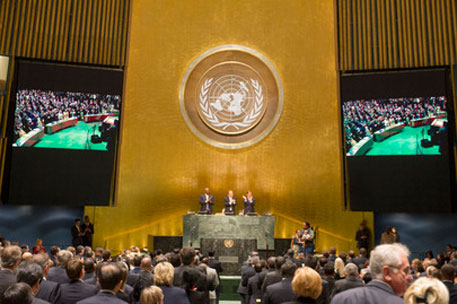 Reminding all nations of their joint responsibility in arresting the effects of climate change, UN Secretary General Ban Ki-moon stressed the importance of a low carbon climate for a resilient future. Speaking at the opening ceremony of the climate summit in New York on Wednesday (GMT), he reiterated that “our response will define our future.”

“No one is immune to climate change,” he said as he referred to his first-hand experience of its devastating effects, when Hurricane Sandy  hit New York, flooding even the United Nations.

Cutting emissions was a top priority and the secretary general said he hoped for a carbon neutral existence by the end of the century. He also called for the pricing of carbon, saying, “There is no more powerful way to drive the market transformation we need.”

Ban Ki-moon invited countries to make more contributions to the under-funded Green Climate Fund. “We must meet the broader $100 billion-a-year pledge made in Copenhagen,” he said.

He also laid special emphasis on the unity of purpose and action by world leaders, civil society and the private sector. “We need all hands on deck,” he said, a phrase he used several times at meetings and press conferences during the course of the day.

Peru, which will host the next chapter of climate talks in December, and France, which will host the signing of the new climate deal in 2015, shared the dais at another press meet during the day. Their joint appearance was symbolic of the “developed v. developing” debate that has stalled the progress towards a common UN Framework Convention on Climate Change (UNFCC).

While French president, François Hollande, admitted the urgent need to tackle climate change, President Ollanta Humala of Peru said his and other developing countries affected by climate change were already paying the price. “The El Nino phenomenon struck our territory and we are obliged to reconstruct our countries. These are costs we must shoulder,” he said.

Earlier in the day, the French president had announced a $1 billion contribution to the cash-starved UN Green Climate Fund. “We can’t limit ourselves to words and expressions of regret,” Hollande said.