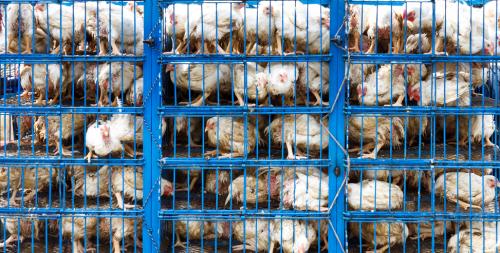 The United Nations Committee on Food Security (CFS) has adopted a set of recommendations at its annual meeting in Rome to emphasise the need to address the impacts of unsustainable meat and dairy production on deforestation, land grabbing and food security.

Industrial production of meat and dairy products is one of the leading contributors to global warming as it produces large amount of greenhouse gases. As per the Food and Agriculture Organization (FAO), global livestock accounts for the release of 7.1 gigatonnes of CO2 equivalent per year, representing 14.5 per cent of all emissions.

These recommendations are welcomed by the Global Forest Coalition (GFC) and other civil society organisations that had advocated for them. They particularly welcomed recommendations related to the rights of women working in the livestock sector, which they say are possibly the strongest text on gender adopted by the CFS so far.

While positive in some respects, GFC deplores the contradictory nature of these recommendations as they fail to adequately address the impact of livestock production on climate change or human rights. "CFS’s recommendations simply do not add up to meeting existing climate change commitments, which call for radical transformation of all sectors, especially the livestock sector," says Mary Lou Malig, coordinator of the GFC livestock campaign.

Activists note that due to increasing corporation influence, the CFS is failing to take a lead in addressing major threats to food security. A growing trend of public private partnerships and so-called blended finance instruments allow a rapid corporate take-over of public policy by creating financial dependencies on the private sector.

Cutting across all activities and all species, the consumption of fossil fuel along supply chains accounts for about 20 per cent of the livestock sector’s emissions.

On commodity basis, beef and cattle milk are responsible for the most emissions, respectively, contributing 41 percent and 20 percent of the sector’s overall GHG outputs, as per the FAO. They are followed by pig meat, (9 per cent of emissions), buffalo milk and meat (8 per cent), chicken meat and eggs (8 per cent), and small ruminant milk and meat (6 per cent). The remaining emissions are sourced to other poultry species and non-edible products.