A peek into the world of fungi 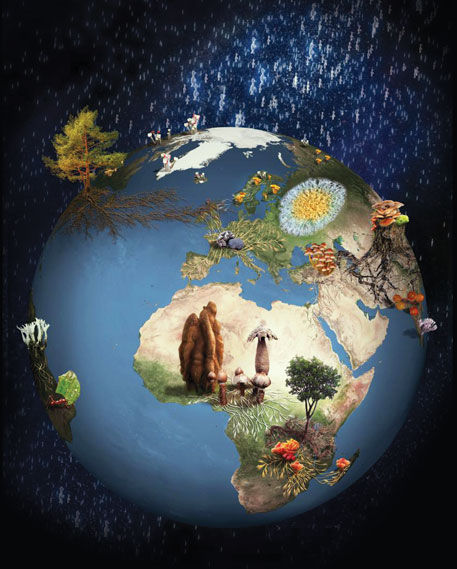 From the time they inhabited the landmasses some 500 million years ago, fungi have played a fundamental role in Earth’s geochemical cycles. They are important ingredients for healthy and agriculturally viable soil as they decompose dead organic matter to provide necessary nutrients to plants. The balance of fungal communities can even directly affect the carbon cycle and, thereby, the pace of climate change. Yet, due to their concealed existence—most fungi are microscopic and live beneath the soil—we know very little of their global ecology.

In the recent past, several studies have sought to advance our understanding of fungal ecosystems and highlight the important role soil fungi play in sustainable soil management, forest preservation and climate change mitigation. Now, in a first-of-its-kind study, a team of scientists, led by Leho Tedersoo of the University of Tartu, Estonia, sampled the microbial life of the soil at 365 locations across six continents to know about the basic drivers of fungal biodiversity. They studied the distribution of fungal communities at each site along with soil pH, rainfall pattern, plant diversity and spatial variables.

Tedersoo and his team collected and studied 40 soil cores from each of the 365 sites in over 40 countries, including India and Sri Lanka. The massive work required the coordination of 35 research institutes. Soil samples were taken from a diverse set of ecosystems, including the Amazon rainforest, the Himalayas and Siberia.The team studied the fungal DNA in these samples. They found that fungal diversity is not primarily determined by plant diversity. The study shows that mean annual precipitation is the strongest driver of species diversity among soil fungi, meaning a more diverse set of soil fungal communities will be present in areas with large amounts of rain or snow. Soil pH and soil calcium concentration also significantly increase diversity. The overall fungal diversity increases towards the Equator, with the notable exception of certain fungal groups such as ectomycorrhizal fungi.

There are about 100,000 known fungal species, and nearly half of them were observed in the study, which is the most extensive analysis of fungal distribution to date, according to Colin Averill, who studies fungal ecology at the University of Texas, Austin. He was not part of the study, which was published on November 28, 2014, in the journal Science.

This understanding of fungal biodiversity assumes significance in the face of climate change. In a comment on the study published in the same issue of Science, David Wardle from the Department of Forest Ecology and Management and Björn Lindahl from the Department of Soil and Environment, Swedish University of Agricultural Sciences, write, “Improved knowledge about links between macro-climate and fungal communities will help predict how global climate change is likely to affect the relative abundance of key fungal groups and thereby alter fungal-driven ecological processes.” 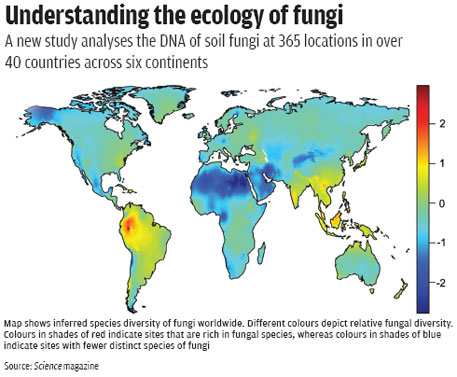 The study classifies fungi into groups on the basis of their ecological role. Two of these groups figure prominently in the carbon cycle. The first group consists of “saprotrophs” or decomposers, which recycle the nitrogen in dead plant matter and release it back into the atmosphere as carbon dioxide (CO2). The second group consists of “ecto-mycorrhizal” (EcM) fungi, which grow in extensive filament networks around the roots of certain woody plants like birch, willow, pine and rose. They are classic symbionts, exchanging nitrogen for carbohydrates manufactured by plants through photosynthesis.

Earth’s soil can store three times the carbon as the atmosphere. But a 2014 paper in Nature by Averill and scientists at the Smithsonian Tropical Research Institute shows that soil with EcM fungi can store 70 per cent more carbon than soil without EcM fungi. The study suggests that EcM fungi snatch nitrogen from dead plant matter before saprotrophs can get to it, leaving less nitrogen to saprotrophes for decomposition. The end result is more carbon in the soil and less in the atmosphere.

In other words, the relative balance of saprotrophs and EcM fungi determines the amount of carbon stored in the soil and the rate at which carbon is released into the atmosphere as CO2. Since these fungi are directly responsible, a better understanding of the drivers of their global diversity is necessary to fight climate change.

For example, the study shows that EcM fungi are driven primarily by host plant diversity and high soil pH, while saprotroph diversity is correlated to mean annual precipitation. According to Tedersoo, drying and desertification due to climate change will have a direct impact on these fungal communities. “Concurrent changes in vegetation may further alter the functional composition of fungi,” he says. His study suggests that prevalent climate change might reduce EcM fungal diversity and abundance. This reduction could, in turn, expedite the release of CO2 into the atmosphere, quickening the pace of climate change.

But further research is required. “We know very little about how other fungal species or functional groups of fungi affect carbon cycling and storage. If we did, we might be able to make better predictions about how these fungi respond to climate change and in turn affect the rate at which carbon dioxide is released into the atmosphere,” Averill says.

The biodiversity pattern of soil fungi was also explored by Richard Bardgett of the University of Manchester and Wim van der Putten of the Netherlands Institute of Ecology in the November 2014 issue of Nature. The authors conclude that there is little evidence to prove that biodiversity of soil organisms follows the same pattern as plant or insect diversity. “It is important to understand the biodiversity of soil fungi because soils with many fungi are in general more resistant to extreme events, such as drought. Soil fungi provide structure to soil which is important for soil fertility,” Putten explains. He adds that in a heavily populated country like India, sustainable soil management should be high on the agenda.