Angry river: How Jiadhal in Assam’s Dhemaji is changing livelihoods

The Jiadhal flooded, not once or twice, but several times in 2020. Flood plains were damaged, houses washed away. A solution, however, seems afar 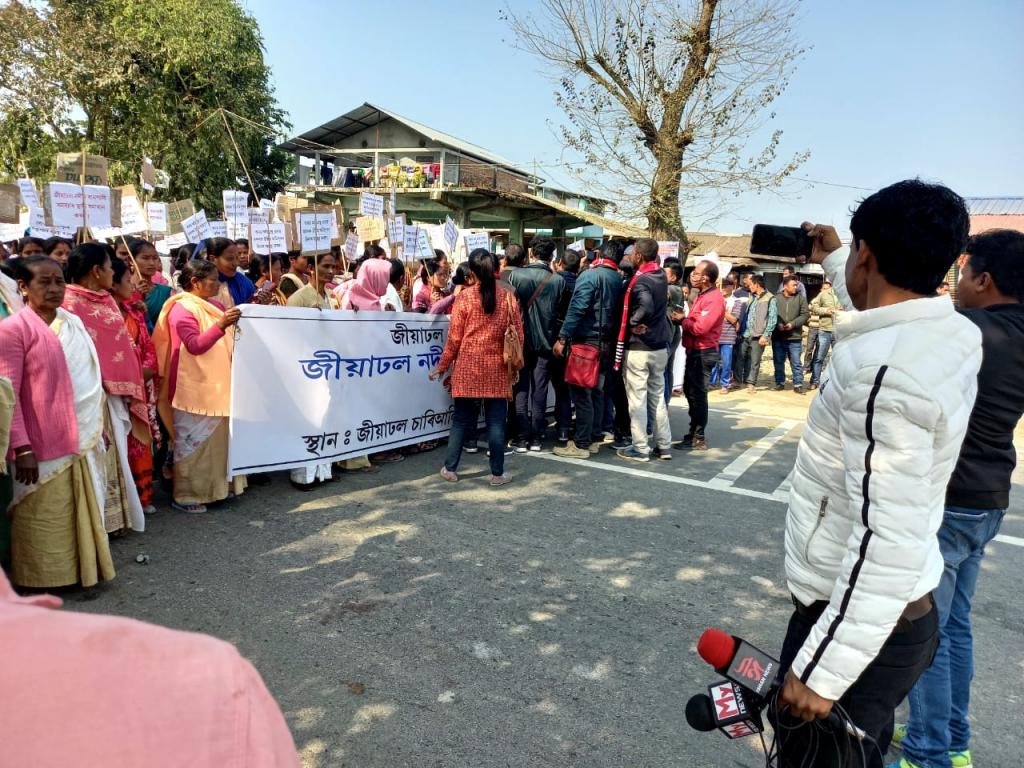 Thousands descended on the National Highway-15 to protest against the state government’s alleged tardiness to control erratic flooding of the Jiadhal river. Photos: Harish Pegu

A blockade near Jiadhal Chariali in Assam’s Dhemaji district January 7, 2021 was a testament to its inhabitants’ fury, and by extension, of the nature. Thousands descended on the National Highway 15 to protest against the state government’s alleged tardiness to construct embankements along the Jiadhal river — a tributary of the Brahmaputra — that has flooded repeatedly in 2020.

Most villages in the district exist along the river. When it overflowed, flood plains were damaged and houses washed away. Huge swathes of sand deposited on croplands. The cattle died.

The river traverses a peculiar topography — from the Abor Hills of Arunachal Pradesh through the Dhemaji district of Assam. It naturally changes its course frequently and flows through several channels. However, changes in rainfall patterns, especially heavy rainfall events upstream, have made it more volatile.

The river has changed its course thrice in the last four years alone, according to locals. It flowed — stable and sturdy — towards south-west between 2006 and 2015, before changing character and course in 2016.

“One of the factors impacting the morphology of the river is the increasing high rainfall events in the west Siang district of Arunachal Pradesh. That is where the catchment of the Jiadhal river lies. The second is the health of the watershed, possibly deteriorated because of deforestation and construction activities. Such activities are difficult to keep track of as there are no major formal or informal communication channels between the two states. This may have contributed to an increase in surface run-off which, bringing in more debris.”

Understanding the precise impact of climate change on the area, and in general in the North East, is challenging because of lack of rainfall data and credible long-term research.

Harish Pegu, who has worked on flood management along the Jiadhal river, told Down to Earth: “The first instance of flooding in 2020 happened on May 22; after that, minor as well as major flooding events have occurred every four to five days.”

Pegu added that the rains started in March and April 2020. It continued till June, with the onset of the south-west monsoon aggravating the flood situation.

In June, Dhemaji district saw the worst: Floods affected 61 villages, destroying crops over 3,474 hectares and impacting over 15,000 people. At least 12 roads were damaged.

It received 86 per cent excess rainfall on June 23 that increased to 163 per cent on June 24. Between June 1 and June 24, the district received 150 per cent more rainfall than normal. 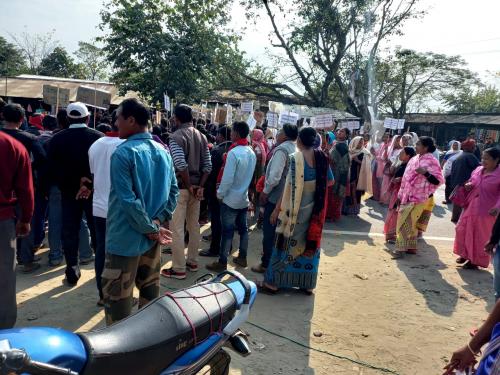 But the most destructive flooding event in the Jiadhal-Kumutiya occurred on September 17, when houses of 28 families in Kekuri village, a few kilometres upstream from Karpun Puli, got washed away. The river had so much sand that some of the houses drowned.

“The flood water came into the village at around noon that day, and washed away everything I owned in two hours,” Sonaram Doley of Kekuri village told DTE.

Doley’s house is still deep in the sand; he has sought shelter in a temporary house. No government official visited him after the initial relief was provided, he claimed. The sand deposits have made it impossible to continue farming, and he has resorted to wage labour.

Sand deposition in villages along the river, especially in rice fields, is a long-term impact of flooding that has increased with high rainfall events. Productivity of various rice varieties such as Sali, Bao and Ahu, has reduced drastically in the district.

More sand and less fertile silt in flood waters is one reason behind this. “Forests around this area stopped the coarser sand and allowed the fertile silt to come in. As they were cleared for farming, the sand flow in the flood waters increased,” said Pegu.

As rice fields outside Karpun Puli village were damaged during the September 17 flood, farmers were pushed into daily wage labour. “Sand also decreases the nutritional quality of the soil, thus impacting quality of the crops,” said Das.

The impact of catastrophic flooding of the Kumutiya river in 2007 can still be seen in several downstream villages where sand deposits prevent people from carrying out any productive farming.

The inhabitants of the district have been demanding the completion of a six-kilometre-stretch of an embankment on the upstream of the Jiadhal river to control the flooding. The original embankment was constructed in 2006-07, but was breached in 2007, causing floods. Locals alleged the construction was carried out in a shoddy manner without boulder reinforcements.

In June 2020, the Water Resources Department (WRD) of the Assam government gave approval for Rs 6.43 crores in funds for the building of two kilometres of the embankment, according to documents accessed by Down to Earth. But no work has happened so far.

The morphology of the Jiadhal river was changing and there was a need to take urgent measures to address the problem, according to the executive engineer, WRD, who prepared the document.

Locals have demanded compensation and rehabilitation of those who lost their houses, cattle and crop lands in the 2020 floods. They have sought repair of village roads that they claim has not been carried out after more than three months of the last flooding event.

Pegu and others submitted a memorandum to the district commissioner, WRD officials and the state flood control minister in November, but no action has been taken so far.

Even when the works are set in motion, they are done so without any public consultation with the local people. At least Rs 2 crore were spent in bamboo palisading in the Jiadhal basin area in August 2020 to control the flow of flood water downstream. And yet, it did not stop the September 17 flooding.

“Traditional knowledge of locals living by the river for centuries is often ignored by officials and engineers constructing embankments and other works,” said Das. He added that consultations were essential for proper work to happen.

On the other hand Das also thinks that building a completely concrete embankment like some local people want might also not be the best way out so a consultation becomes crucial.

“We are also demanding for the formation of a committee comprising of local community members, the district administration and the WRD for the control and management of flooding in the Jiadhal and Kumutiya rivers,” said Pegu.

“The involvement of local people in the committee might prevent misappropriation of funds, which is rampant in building and repair works,” he added.

“Earlier, people of the area knew where to settle. But now, with the vagaries of climate change, they so not have the knowledge anymore. They either do not understand the risk of living on the flood plains, or they know the risk but don’t have any other choice,” said Das.

Whether these measures will help people living around the Jiadhal river remains to be seen.