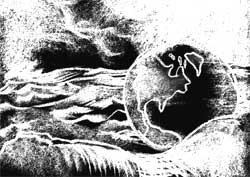 greenhouse gases and other pollutants could trigger large, abrupt and potentially disastrous climate changes. This warning is given in a new report by the us-based National Academy of Sciences. According to the report, if the planet's climate is being forced to change as is currently the case -- it increases the number of possible mechanisms that can trigger abrupt events. And the more rapid the forced change that is taking place, the more likely it is that abrupt events will occur on a time scale that would have immediate consequences. Researchers do not know enough about such events to accurately predict them, so surprises are inevitable (www.washingtonpost.com , December 12, 2001).

Most of the climate change research in the past has focused on gradual changes, such as the processes by which emissions of greenhouse gases lead to warming of the planet. But now the report states that periods of gradual change in Earth's past were punctuated by episodes of abrupt disturbances, including temperature variations of about 10 c in only a decade in some places. For example, roughly half of the warming that has occurred in the northern part of the Atlantic Ocean since the last ice age was achieved in only a decade. The warming was accompanied by significant climate changes across the globe, including flooding and drought. Since then, less dramatic climate changes have occurred, affecting precipitation, hurricanes and the El Nio events that have disrupted temperatures in the tropical Pacific.

The report-drafting committee says that research into the causes, patterns, and likelihood of abrupt climate changes is the best way to reduce its impact. "Overall, research should be aimed at improving modelling and statistical analysis of abrupt changes," said committee chairperson Richard Alley of Pennsylvania State University, usa. An important focus of the research should be on mechanisms that lead to sudden climate changes during warm periods, with an eye to providing realistic estimates of the likelihood of extreme events. Poor countries may need more help since they lack scientific and economic resources. The report offers a new edge to the decades-long debate over global warming problems. It is likely to provide additional ammunition to European and Asian environmental leaders seeking to persuade the us government to reconsider its opposition to the Kyoto Protocol.