Algae can help check rising carbon levels in the environment 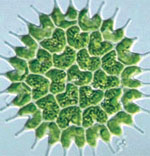 Though forests and oceans are natural carbon sinks, these resources have limited ability to absorb anthropogenic carbon. Carbon sequestration or carbon capture was touted as a method to reduce carbon emissions. But questions have been raised over carbon sequestration technology.

The idea behind carbon capture and storage (CCS) technology is to capture CO2 from smokestacks of industries and coal-fired plants—two major sources of greenhouse gas emissions—and transfer it underground through pipelines.

“But there is concern that carbon might leak and expose the environment to unknown risks,” says Malti Goel, former scientific advisor to the department of science and technology who has led the carbon sequestration national research programme of India. “More research is needed to study how carbon reacts with soil and minerals before CCS is considered a long-term goal for relieving global warming,” she adds. 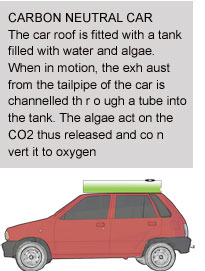 Scientists also proposed storing carbon under oceans as an option. But that can increase ocean acidity. The process is costly, too, as it requires building an entire infrastructure like installing pipelines. Materials used to capture carbon are expensive as well.

But there is still hope. Experiments across the world have shown algae, small microorganisms one can find in all waterbodies like sea and ponds, as viable alternative. “Algae’s ability to develop fast and grow practically in most environments makes it possibly the only type of biomass that can capture most if not all the CO2 emitted by power plants and other intense industrial sources,” says Ankur Jajoo, research analyst with American research firm, Frost & Sullivan. Jajoo works on innovative technologies for treating air pollution and waste water. Algae, like plants, capture CO2 and produce oxygen through the process of photosynthesis. They are efficient in capturing carbon because they can multiply fast, especially the microscopic algae.

This property of the tiny organisms has been exploited by scientists in building a mechanism to tackle rising carbon levels. For example, a Delhi University professor has used algae to make his Maruti 800 car carbon neutral (see ‘Carbon neutral car’ on p59). Dinabandhu Sahoo, who is an associate professor at the department of botany, uses a plastic tank filled with water to which he adds algae cherry-picked from all over the country. The transparent tank is placed on top of the car and connected to the tailpipe through a tube. When the car is in motion, the exhaust from the tailpipe gets channelled through the tube into the tank. The algae get into action and convert CO2 into oxygen. The oxygen is either released into the air or into the car, depending on the user’s preference. “One kg of algae captures 1.8 kg of CO2 and produces 1.6 kg of oxygen,” says Sahoo.

There are, however, some bottlenecks to the technology becoming commercially viable. The algae tank is huge and slightly grotesque. “When I drive around, I am flooded with questions from bystanders,” laments Sahoo. However, luck seems to be in the botanist’s favour. Several auto firms have recently approached him. “We are in talks to make the design more beautiful and aerodynamic,” he says. “The beauty of this technology lies in the fact that you could extract the used algae and use it to produce biodiesel, fertiliser and even cosmetics,” Sahoo adds. For replenishing the stock of algae, Sahoo is growing them in his lab. But he refuses to divulge the name of the algae used.

According to the International Organization of Motor Vehicle Manufacturers, road transport contributes to 16 per cent of the global carbon emissions.

Innovation is the way

Small strides in capturing carbon through algae have been made in other parts of the world, too. The University of Kentucky in the US is working on a mechanism to employ algae to clean coal-fired plants, which account for 40 per cent of CO2 emissions.

The algae are contained in tubes which are interconnected, making up a system called photobioreactor. The carbon emitted by the power plants is channelled into these photobioreactors where it is consumed by the algae. Last year, Kentucky Energy and Environment Cabinet commissioned US $1.3 million to step up the technology and put it to use at a power station in Dale.

Similarly, a biochemist in France, Pierre Calleja, has made street lamps using algae Chlorella. Each lamp consists of a glass cylinder which is filled with algae and water. These suck carbon out of air. The algae can consume around one tonne of carbon from air every year and can be placed in parking lots and along roadsides.

The idea of algae as biofuel has been around for some time, and in March this year Union science and technology minister Vilasrao Deshmukh flagged off India’s first algal biofuel powered car was for a trial run.

Though billions of dollars have been frittered away on biodiesel research, experts are still divided on its economic viability. “Perhaps this is what is dissuading governments from considering algae as a carbon capture resource,” reckons Sahoo. Biodiesel is not commercially viable because it requires costly infrastructure and there is no proper way to manage the supply chain.

Experts also argue that use of algae in carbon capture only makes sense if the used algae can be reused for other commercial purposes. Jim Sears, president of A2BE Carbon Capture company in the US, says, “Algae in nature sequester huge amounts of carbon. Algae in algae farms will always be small in comparison. These farms will probably never make economic sense if they are only used to get rid of carbon.” The profit is in making valuable products like fuel, food and high value chemicals from these algae after they have been used for carbon capture, he adds.

Sahoo agrees. In fact, while working on his carbon-neutral car, he was quite aware of this bottleneck. “I have carefully chosen the algae used in the solution. They are also rich sources of biodiesel. For biodiesel, you need land to grow algae. In this case there is no need for land as well,” he says.

Goel thinks while algae appears to be a cost-effective and harmless way to deal with carbon capture, things might turn out different in the field. “While you do not need to transport carbon to great distances, you still need a lot of area at least to establish photobioreactors,” she says.