Change in rainfall patterns is behind regular floods in Rajasthan 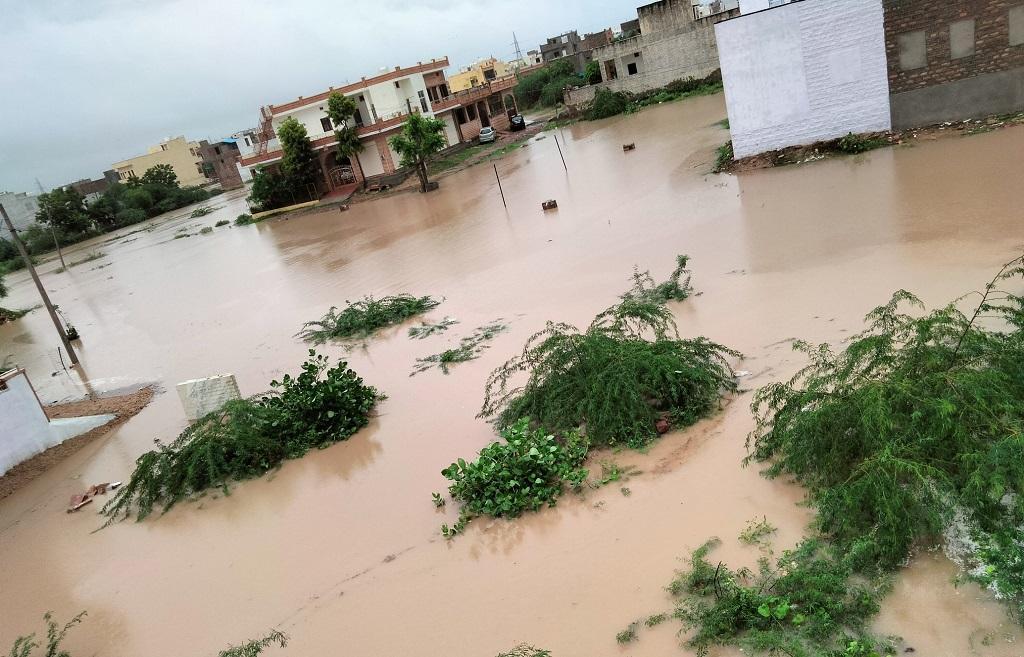 Jodhpur reported 118mm of rainfall between the evening of July 25 and the morning of July 26. Photo: RavindraYogii/Twitter

Western, eastern and southern districts of the state have been inundated with floods this monsoon. Jodhpur reported 118 mm of rainfall from Monday evening to Tuesday morning.

The state now reports floods almost every year. However, the state's climate action plan is still made with drought in mind, showing a lack of preparation.

Analysis of rainfall data from the India Meteorological Department (IMD) of 1989-2018 showed a significant increase in the number of ‘heavy rain’ days in the last decade. This was especially true for western parts of the state.

The analysis said there were fewer rainy days, but there was a rapid increase in the days with ‘heavy rainfall’.

This might be why sudden torrential rains are causing flood-related disasters in the state almost every year. The number of severe cyclonic storms in the areas adjoining the Indian Ocean has also increased significantly over the last few years.

However, another weather expert disagrees.

Khan is the former director of Indira Ghandi Centre for Human Ecology, Environment Studies and Population Studies at the University of Rajasthan, Jaipur.

“There has not been a significant difference in the amount of monsoon rain in India every year, only in the form of the rain,” he said.

In the last ten years, there have been only two such years when the monsoon rains were below average, the analysis said.

The analysis said the desert areas of western Rajasthan received 18 days of rain in 2016 and the average single-day rainfall crossed 120 mm. In east Rajasthan, it rained 126 times.

But the analysis shows a definite change in the rainfall pattern.

The turning point in the rain situation came in the form of the floods in Barmer in 2006. This desert district received 750 mm of rain in the last week of August 2006, which was five times its average annual rainfall.

The severe floods caused more than 300 deaths. It was described as the most dangerous flood in the 200-year history of Rajasthan.

A 2013 research by the Max Planck Institute tried to explain and define the effects of climate change in recent years with the help of high-resolution multimodality.

The density and frequency of rains will increase in Rajasthan in the future, a 2009 report by Swiss Agency for Development and Cooperation had stated. The single-day rainfall in the state is expected to increase to a maximum of 20 mm and five-day rainfall up to 30 mm by 2071-2100.

These estimates and data on the floods in the desert clearly indicate the direction the state is headed in terms of heavy rains. However, a serious and in-depth research is urgently needed.

Another study published in 2009 analysed data from 1871 to 200 and estimated a secondary trend of decline in the annual and seasonal average of rainfall.

The study, published in The Journal of Geophysical Research, reported June and July as the months with heavy rainfall. Until the 1970s, there were signs of more rain only in June, it said.