Cities must lead the action on climate change 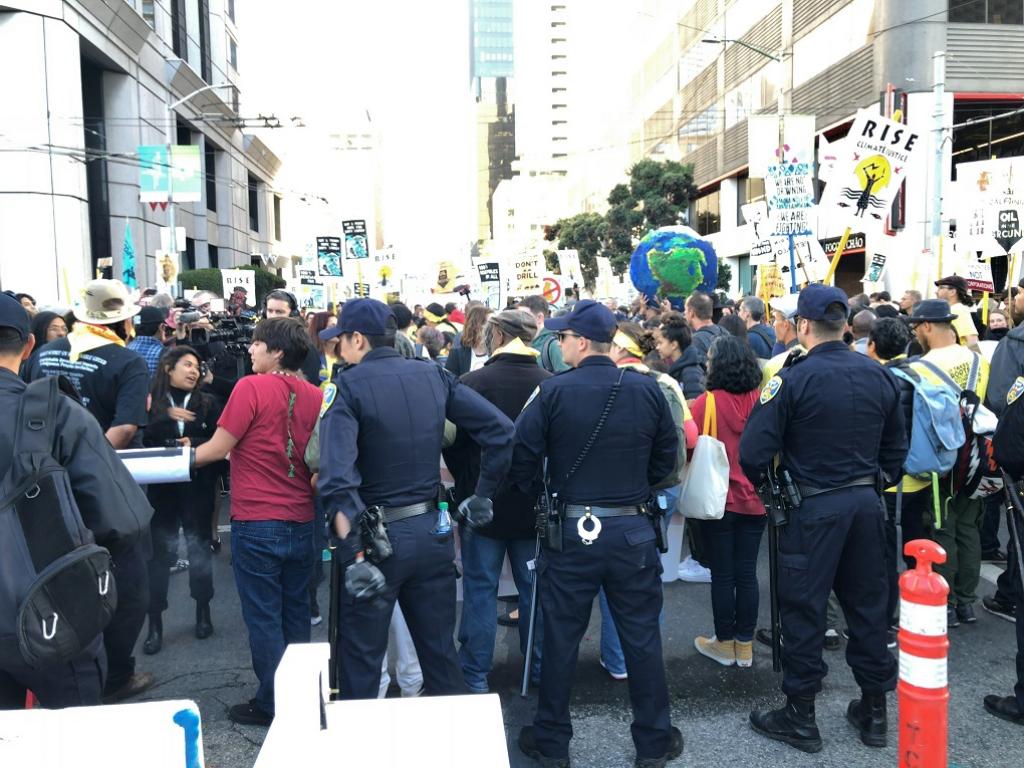 Environmental activists and police face off on the opening day of the GCAS. Credit: Joydeep Gupta

Coastal cities in the tropics are not the only ones suffering from the effects of climate change. So is a city as far north as Copenhagen, said its mayor Frank Jensen. When its residents leave their cars at home and cycle to work, it is not just a matter of ethics; it is a matter of survival.

So it is for Los Angeles, a city once synonymous with smog. Cleaning it up has needed measures equivalent to taking 737,000 cars off the streets. Now Los Angeles is leading a consortium of cities big and small to buy electric buses together. That should significantly improve their ability to negotiate prices downwards, mayor Eric Garcetti said.

Cities in the developing world are not in the same situation, Zandile Gumede, mayor of Durban, pointed out. As much as 60% of the residents in theses cities have no access to electricity or proper drainage. But that also is an opportunity to build this infrastructure in a way that makes economic and ecological sense at the same time.

That can also be said for Dhaka. With 12.5 million people jammed into 42 square kilometres, it has the densest population in South Asia and perhaps in the world. Mohammed Sayeed Khokon, mayor of Dhaka South, has to constantly plan for more, as 4,000-5,000 people move into the Bangladesh capital from the countryside every day, some of them displaced by effects of climate change. He has just opened a six-storeyed building to house some newcomers, but needs many more, and used the podium at the Global Climate Action Summit (GCAS) to seek the world’s “support and attention”.

A large part of the September 13-14 GCAS in San Francisco is about the state of cities and what their administrators are doing. It was perhaps inevitable, since cities account for 73% of the greenhouse gas emissions that are causing climate change, according to Michael Bloomberg, former mayor of New York.

Cities also provide opportunities to solve the climate and related problems. Experts estimate that by 2030, a boost in urban climate action can prevent approximately 1.3 million premature deaths per year, generate 13.7 million net jobs even after phasing out the old ones, and save 40 billion hours of commuters’ time plus billions of dollars in reduced household expenses each year.

These estimates came out in Climate Opportunity: More Jobs; Better Health; Liveable Cities, a report released on the eve of GCAS. It examines effective urban solutions to climate change that include energy efficiency retrofits in buildings, enhanced bus networks, and district-scale renewable energy. The authors said these climate actions are also strong drivers of positive public health and economic outcomes around the world.

Investments in residential energy efficiency retrofits will result in a net creation of 5.4 million jobs in cities worldwide. These investments will also result in significant household savings, as well as emissions reductions.

District-scale renewable energy for heating and cooling in buildings can prevent a further 300,000 premature deaths per year by 2030, as well as create approximately 8.3 million jobs and contribute to significant emissions reductions.

Overall, climate action policies can have proportionally greater outcomes for lower income groups in developing cities, where populations have the most to gain from the introduction of new technologies, the report said.

Mayors from around the world have gathered at GCAS under the aegis of C40 Cities. Mark Watts, its executive director, said, “Climate Opportunity shows what the mayors of the world’s great cities have known for a long time: climate, public health, and a strong economy are deeply connected. We need cities around the world to implement the bold climate policies detailed in this report, if we are to avoid catastrophic climate change. By demonstrating that these measures will also create green jobs, save lives and cut consumer energy bills, we are making it even easier for mayors, policymakers and citizens to embrace the pace and scale of action needed.”

The report can be used in a practical way. With it, C40 Cities launched an online dashboard hosted on the Global Covenant of Mayors’ website. It enables city administrators to use data from the report to plan how specific climate actions – such as improving bus service, retrofitting buildings, or implementing renewable energy for heating and cooling – can reduce emissions, create jobs and increase savings. It is customized to cities of different sizes.

Some cities are ahead of others; 27 of them, representing 54 million urban citizens and USD 6 trillion in GDP, have already peaked their greenhouse gas emissions, even while their populations have increased and their economies have grown. These 27 cities have continued to decrease emissions by an average of 2% per year since their peak, while populations grew by 1.4% per year, and their economies by 3% per year on average, said a new study.

The study by C40 Cities says that to keep global average temperature rise to 1.5 degrees Celsius from the pre-industrial level – the aspirational goal of the Paris Climate Agreement – cities in Europe, North America and Australia must peak their emissions by no later than 2020, while the rest of the cities have to do so by 2030.

How did these 27 cities do it? C40 researchers found the main reasons – decarbonisation of the electricity grid; optimising energy use in buildings; providing cleaner, affordable alternatives to private cars; and reducing waste and increasing recycling rates.

Now for the money

The way to roll out similar initiatives in more cities is to find the money for it. For that purpose, a Global Climate City Challenge was launched on the opening day of GCAS by the Global Covenant of Mayors for Climate and Energy and the European Investment Bank. It will address key technical and financing barriers to strengthen investment in green projects and programmes by accessing best practices and technical assistance.

The six cities for the pilot phase, which can start applying for projects right now, include New Delhi. The project will help generate private investment to cope better with a changing climate, cut energy bills, improve waste and water use, and support low carbon and resilient sustainable development.

Mauricio Rodas, mayor of Quito and Global Covenant of Mayors board member, said, “This new initiative will ensure that new investments in energy, transport, water, waste and resilience will make a lasting difference in the years ahead.”

With Rajkot winning for the second time in a row the India crown in WWF’s global One Planet City Challenge, it is now in contention for the international prize as well, which will place the city in the western Indian state of Gujarat in an ideal position to mobilise funds under the new scheme.

Rajkot’s expansion of its bus rapid transport (BRT) lane network impressed the jury, as did its bike sharing and dedicated cycle lanes to connect to BRT stations. Binaben Acharya, mayor of Rajkot, said the city is committed to reduce by 2020 a quarter of the greenhouse gases it emitted in 2012-13. Ravi Singh, secretary general and CEO of WWF-India, said, “It is encouraging to see Indian cities taking the lead in positive and impactful ways to address climate change and related challenges.”