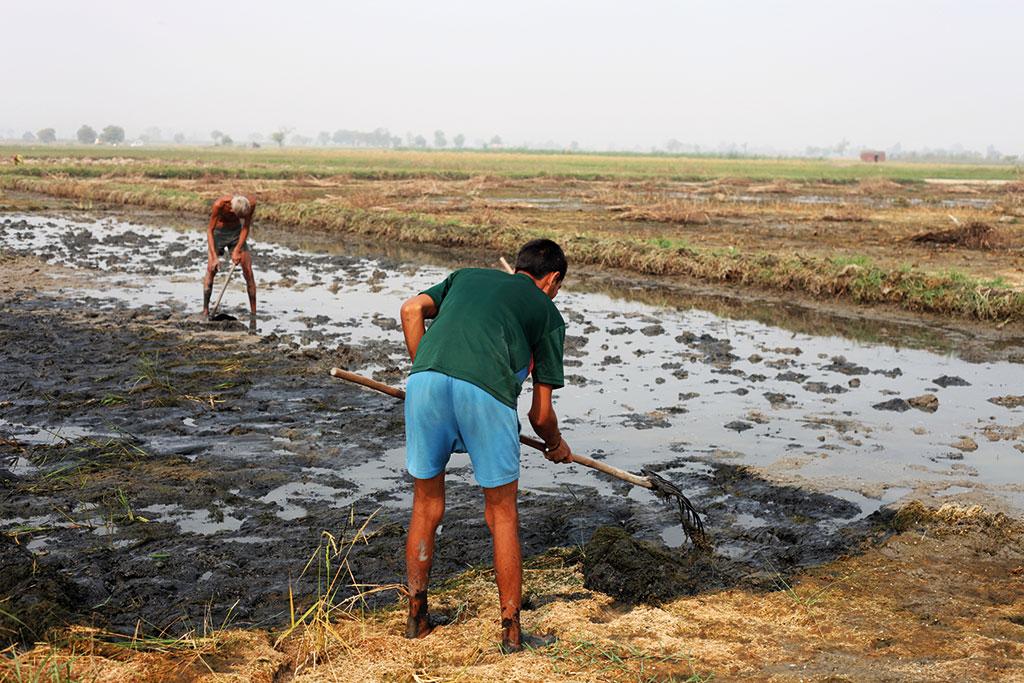 40,000 cabbage saplings, 15,000 cauliflowers, all lost!” says Ramesh Kumar Singh, a farmer of Mandar village in Jharkhand’s Ranchi district. On January 12, 2022, a severe hailstorm battered Mandar and other villages in at least nine districts right when the crops were ready for harvest. It was so severe that the village seemed to be under a few centimetres of snow. “My earning from this crop is gone, so is my investment,” Singh says.

Following heavy downpour September 2021 — the wettest September for India in 27 years — farmers in this region had got back to farms in October with fresh sowing, but unseasonal rains in November-December damaged the crops. Many like Singh, who grew vegetables in a last-ditch effort to earn this season, saw their hopes dashed with the January hailstorm.

In neighbouring Madhya Pradesh, farmers of Niwari district also rue complete loss of their standing rabi crops due to a hailstorm on January 9. It hit at 8 am and continued for 30 minutes, flattening wheat, peas, mustard, sorghum and other crops in at least a dozen villages.

“The hails weighed 10-50 grams and did not melt until evening. I have never seen such a hailstorm,” says Sanjeev Prajapati, a farmer from Kalothra village. It has rained in all but nine of the state’s 52 districts since December 25.

A Down To Earth (DTE) analysis shows some 45 hailstorm events hit over 80 districts in 12 states from December 2021 to January 15, 2022. Before this, heavy rainfall battered these states when kharif crops were being harvested, were ready to be sold, and fields were ready with cash crops like vegetables.

Nuapada, one of India’s poorest districts in Odisha, received five times more rainfall than normal in January this year. It has literally wiped out the farmers’ year-worth of investment as thousands of hectares of rabi crops like green gram, potato, red lentil, Bengal gram, lima beans and onion have been inundated.

Kedar Sabar, a small tribal farmer of Bendrabahal village had grown gol chana (round pea) in his 1.2 ha. It is sown in lowland just a few days before harvesting paddy. “When the chana saplings get trampled under foot during the cutting of paddy, they grow vigorously, and start flowering as the soil dries out,” says Sabar.

Now the flowers are dropping because of untimely rains. “But for the rain, I would have got dal and onion for my consumption and a net income of Rs 35,000,” he says.

The rain has also affected those waiting to sell their produce. Asish Padhi of Budhikomna village in Nuapada owns 5 ha of fertile farmland. “I took 6 tonnes of paddy to the mandi on December 18. As the millers did not turn up, my stock was not procured and the paddy was lying in the open.

It got drenched in the rains on January 11-12. The agents are asking me to sell the stock at Rs 1,200 per quintal (1 quintal equals 0.1 tonne), Rs 760 less than the minimum support price offered by the government,” says Padhi.

“About 5,000 tonnes of paddy of over 1,000 farmers were stacked in the open across Nuapada. They all would have faced losses because of the rains,” says Sanjay Tiwari, a farmer from Bendrabhai village.

As news of hailstorms and unusual extreme rainfall spread, albeit as brief local weather stories, consumers across the country felt the pinch. In Ranchi, the prices of seasonal vegetables like cauliflower and tomato are skyrocketed to above Rs 30 per kg.

In a normal year, these vegetables are priced at Rs 5-10 per kg. In fact, all the 25 markets surveyed by DTE reported unusually high prices of vegetables, wheat and paddy.

Agriculture is by far the worst-impacted sector from extreme weather events and disasters, which have significantly increased in the past two decades. 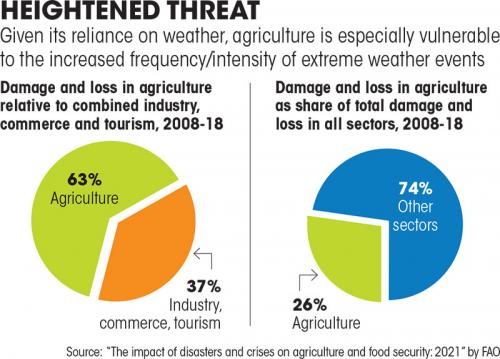 Only 100 disasters struck a year in the 1970s, according to the Food and Agriculture Organization (FAO); their frequency increased to 360 in the 2000s and to 440 in the 2010s. Least developed countries (LDC) and low- and middle-income countries (LMIC) bore the brunt; in 2008-18, these countries lost $108.5 billion (Rs 8.20 lakh crore) due to disaster-induced decline in crop and livestock production, as per FAO.

In India, no comprehensive data is available on the monetary loss due to disaster-induced crop damage.

If this is applied to the 36 mha of crop area India has lost since 2016, the figure translates to a whopping Rs 29,939 crore loss for the farmers. However, this would only be an indicative figure. In 2017, while the area of crop damage was lower compared to 2016, the value of the damage was more than double — Rs 8,761.39 crore.

Shifting rainfall and variability in precipitation particularly poses a risk to the rainfed agriculture that is crucial for the survival of a significant number of poor population and plays a critical role in global food production.

Recently, Miles Parker, senior lead economist at the European Central Bank (ECB) and Livio Stracca, deputy director general, ECB, studied the impacts of weather, particularly seasonal divergence of temperature, on prices in 48 advanced and emerging countries. They have found that “during a hot summer, food prices increase by 0.38 percentage point contemporaneously.” Swiss Re, reinsurance company based in Zurich, estimates that rising temperatures will cause a dip in agricultural production.

“Higher temperatu- res and more extreme drought events could severely reduce labour productivity as a result of heat stress and health effects,” it says in a statement in April 2021.

The world is already losing up to 4 per cent of potential crop and livestock production due to disasters, says FAO. This converts to a loss of 6.9 trillion kilocalories per year, or annual calorie intake of 7 million adults. If one interprets this loss in context of poor-, lower- and middle-income countries, it is a loss of 22 per cent calorie intake daily.

So, Climate change-induced disasters not only impact the farmers in terms of income loss, but also reduce availability of food. Loss in production increases prices which, in turn, influences people’s food intake. It is the climate’s food trap that captures every one. 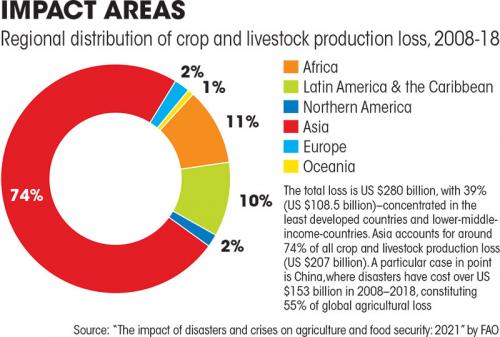 A survey by the Asian Development Bank (ADB) conducted during 2001-10 in 63 countries showed that 1 per cent increase in food inflation leads to an increase of 0.3 per cent in both infant and child mortalities, and 0.5 per cent in undernourishment. The impacts are severe in poorer countries.

Given that an average household in India spends nearly 50 per cent of its earnings on food — the poor spend more than 60 per cent — price rise will precipitate the worst crisis in the country.

The poor will face a double whammy: One, they will be forced to spend much more on food, and, two, their health will further deteriorate. India’s poverty level may increase sharply and the country may not succeed in its fight against infant and child mortality and malnutrition.

Interestingly, the ADB survey also shows that impacts of food inflation on public health are lesser in countries that have a higher contribution of agriculture to GDP. This calls for smart measures that can help agriculture adapt to the new normal.

The first step is to re-orient cropping patterns based on agrometeorology advisories. A survey by the National Council of Applied Economic Research (NCAER) has shown timely delivery of weather advisories to farmers had a significant impact on their income. The survey was done to gauge the economic impact of India’s investments on the National Monsoon Mission (NMM) and High Performance Computing Facilities (HPC).

Farmers were asked to make modifications to nine critical farming practices based on the weather advisories. Going by NCEAR estimates, the average annual income of a farming household that did not adopt any changes was Rs 1.98 lakh. But for a farmer that took up 1-4 modifications, this income increased to Rs 2.43 lakh. With five to eight modification, farmers’ income rose to Rs 2.45 lakh per annum. Those who adopted all the nine changes had an income of Rs 3.02 lakh per annum.

“The economic investment of Re 1 in NMM and HPC facilities realises a 50-fold increase in economic benefits through gains to BPL farming and fishing families,” the report said.

Despite such measures, sudden weather events, such as a cyclonic storm, sudden downpour or raging heatwave, which are becoming frequent and unpredictable, may still wreak havoc on agriculture plans. Here insurance can offer cushion against the damage and help farmer prepare for the next crop — only if the policies are robust.

This is the second article in a series on climate change impact on agriculture and the food system. You can read the first part here.

This was first published in Down To Earth’s print edition (dated 1-15 February, 2022)